The looks you receive are almost too much to bear. The gynecologists who look shocked and afraid for you. The friends who don't understand what you just said. The other breast cancer survivors who pity you. The researchers who regard you with interest.

You have a subset of a disease that has been so commercialized that people forget that it is deadly. You have a cancer that was considered a certain death sentence not so many years ago. You read about your disease and you don't even pay attention to the following types of statements because you have heard them so often over the past four years:

Patients whose breast cancer is hormone negative have a poor prognosis.

Five year survival rates are much lower for women with early stage triple negative disease than other subtypes.

Women who are triple negative and also BRCA negative are less likely to respond to treatment.

Triple negative breast cancer is more likely than other subtypes to metastasize, even if it is discovered initially at a very early stage without lymph node involvement.

And then, there is the misinformation. While most BRCA+ cancers present as triple negative, not all do, and the opposite is not true: most women with triple negative breast cancer are NOT BRCA positive, so no, mine is probably not genetic--sorry. Most triple negative breast cancers are "basal like" and present as grade 3 (the most aggressive, abnormal cell mutation--unrelated to cancer stage), but not all do. In fact, I have had 4 triple negative breast tumors, and 3 of them were grade 2; only 1 was grade 3. Black and Latina women are much more likely than white women to be triple negative, and younger women are disproportionately affected, but older, white women can be diagnosed with TNBC as well. Women with estrogen positive cancer are not supposed to eat soy or consume alcohol (both are estrogen inducers), told to avoid all hormone therapies such as the pill, and encouraged to lose any body fat they can (fat is also an estrogen inducer). For women with triple negative breast cancer, advice about avoiding recurrence basically boils down to this: try to be healthy. we have no idea what else to tell you. and Good luck. Many assume that a TNBC diagnosis means an automatic double mastectomy or you are an idiot for going another direction, though there is no evidence (NO. EVIDENCE.) to support the efficacy of double or even single mastectomy for non-BRCA-positive TNBC patients.

When I was first diagnosed, I made the mistake of going on the internet. The information about TNBC was so depressing and terrifying. I ended up telling myself that the discovery of hormone receptors was relatively new, so there had to be women in the past who had TNBC but they didn't know it and they survived. I had to believe survival, including disease-free survival, was possible and even likely. But I was not meant to be one of those stage 1 women who kicked cancer's ass and went about my life. My cancer came back--in fact, some vestige of it most likely never left. I always knew that it was possible that KatyDid Cancer and she would have to do it again.

So, there is my two cents about TNBC on this day that encourages research and action into this aggressive, misunderstood and difficult disease. Now I have something else I'd like to get off my chest.

I have been feeling loss recently. This shouldn't be a huge surprise--I've lost things, right? I've lost body parts, time, health, my old metabolism and hormones, I've even lost some of my hope for what should have been a long future ahead. But that's not the loss I have been feeling heavily of late.

You see, I kind of wanted to have another kid. And then triple negative breast cancer took that option away from me. 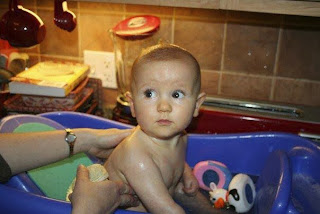 I know a lot of people don't end up with the family units they envisioned. I know so many people who have dealt with infertility, including myself, after Lenny was born and I had secondary infertility. I know people's lives so often turn out differently than they expected. But that doesn't make this loss less real. I mean, sometimes it hits me. When I was diagnosed with breast cancer, I WAS NURSING A BABY. I had an adorable infant who hadn't even turned one. My daughter was just 4. Augie was such an easy baby (he must have been saving it up for later), and my pregnancy and delivery were so comparatively easy, that I thought about that third kid quite a lot. And then--BAM. I was thrown into this sea of loss--I went through menopause with a baby still in the house, I was so weak and skinny and tired that I don't even remember my son learning how to walk, I was told by a fertility specialist (I later found out I was one of her first patients, so I wonder if she has changed her way of talking to women--tough love may or may not be the way to go) that I needed to give serious consideration to the following: if things didn't go well for me, would I want to leave my husband with two children or three to raise by himself?

I had conversations with Gabe about how I didn't want him to get a vasectomy because he was a young man and if I died, I wanted him to have kids with someone else. I am still very fertile, still ovulating regularly, so cancer and it's treatment--20 rounds of chemo, people--did not take that from me. I COULD, physically, have another kid. But I COULDN'T, actually, have one. I don't even have two breasts to nurse with, and I am considered to have had "pregnancy induced cancer" by some (yes, pregnancy is a risk factor for contracting breast cancer, in the first three years following--that's a fact, not a scare tactic), the breast changes of pregnancy would scare the crap out of me, I have already had a recurrence and would be at high risk of another if I got pregnant, and, though it was hard to hear, it remains true that I am less likely to live to raise my kids than most mothers my age.

I am not super-maternal, so I don't miss the baby stage specifically. I miss the opportunity to have brought another interesting person into my family and the world. I have dreams about kids who don't exist and never will. I have fantasies that I don't even tell my husband about, where we take in some wayward youth, some teenager who has no other place to go (Gabe has always said we would do that, as if it were a given--it's one reason he wanted a bigger house, I guess because he feels the need to pay forward what others did for him), and part of the reason that I think about that is because I don't really believe that I will live to see my kids become teenagers. I believe it is possible, but I no longer feel it is likely. So I have these thoughts and then I let them go. I don't cry, I don't get lost in nostalgia, I just feel loss, and even though I am stoic and always have been, even though some people have told me I'm the wrong kind of mother, the wrong kind of woman or wife or whatever, I still feel this loss. And it's real. And it's because of cancer.

There. It is off my chest and into the ether. So on this triple negative breast cancer awareness day, be aware of this: cancer doesn't end when treatment ends. Cancer can return, cancer can kill you now or later, but even if it doesn't, it changes the life you have left. We should all be aware of the role that luck plays in our lives, both good luck and bad luck, and know that it can change on a dime. I consider myself to be both lucky and unlucky, but at least I am still here, still able to do this, still able to leave this legacy for the kids I do have, who will someday read this and know that I loved them so much I wished there were more like them. 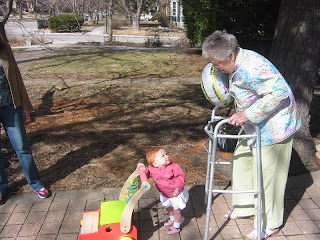