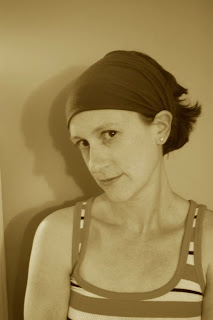 It was a typical Monday morning. I had trouble sleeping the night before. I was up before 5, cold and alone in my king sized bed because my daughter had also had trouble sleeping, and my husband had gone in to comfort her. He came back to bed and I snuggled into him. Within a few minutes, I was up, getting dressed for the gym. The endless winter greeted me as I heated up the car. I was the first to arrive. When the door was unlocked, I went inside and realized that I was the first person to reach our collective destination: we had a challenge laid before us in January--we had three months to "ride across America," to spin enough "miles" to get from Mount Rainier, Washington, to the lighthouses of Maine. I was the first to make it to Maine, out of everyone, chemo be damned. I placed my last star on the board and started bragging, as it is only acceptable to do in a gym with other crazy people who are up at dawn on a cold, icy Monday morning.

We started to ride. We were sprinting. I was thinking about the time when Gabe and I went to Maine, for my 28th birthday, when we had been dating a handful of months and were newly in love and our lives were laid out before us like the lighthouses beyond the black rocks. And then, I began thinking about a conversation we had last night, in bed, about whether or not he saw me as disfigured. I don't normally see myself that way, but for a fleeting moment, I did. And he got very quiet and said nothing. I asked if he missed my old breast. I thought he wouldn't answer me. And then finally he said "a little bit. but it's not about how you look...it's just..." and his words fell away and I knew what he meant: I miss how it was before--before we knew. Before it happened.

And then, out of nowhere, came the memory of weaning my son because of my cancer. There I was, flying on the bike, when the crushing memory of how hard it was for me to even look at him in the mornings when my husband fed him out of a bottle enveloped me. I remember the look on my son's face, full of adult confusion and, yes, even hurt. I felt the weight of the things that have happened, and I began to cry, right at the moment when the instructor said and now we are climbing. So I climbed, little legs moving faster than everyone else, including the man who was right next to me, the one who was one stop behind me on the ride across America, the one I am always competing against as we stare at ourselves in the mirror. I was wiping away the tears, pretending they were sweat, and I saw him seeing me, and I thought, no I can't do this here, not here, not now. I tried to just pedal my way out of that memory, but it didn't work. I needed something else.

And so I thought of the movie Gabe and I finally watched last night, the movie that was intended to be bad and should have been so bad that it was good, but instead was so bad that we got distracted by each other's bodies and didn't finish watching Sharknado. And then it hit me, that line of dialogue that would save me from myself one uneventful Monday morning: "Beverly Hills' emergency services are second to none!" And then it was over, and I was laughing, and several people in the gym turned to look at me, because I was laughing at something they could neither see nor hear.

The ride ended. We all went home. My husband had made my coffee (he doesn't drink it himself, but he makes it for me every day), and he had fried me an egg. I was ravenous. The kids were eating, getting ready for school. My daughter told me about her bad dream, which involved the roof falling off of our house, meaning we couldn't live here anymore. I gave the usual morning orders, the ones the kids act as if they have never heard before, every day of their lives. Finish your breakfast. Brush your teeth. Augie, get some pants on. Here's your lunch.

And I settled into the morning, still sweaty and warm, thinking about lighthouses, imagining myself fleeing the endless New England winter, starting the ride again, heading back to a place that is sunny and warm, using everything I've got to make it back there. Just like any other Monday morning.
Posted by Katy Jacob at 9:10 AM