This post, which comes after the longest hiatus I've taken since starting this blog seven and a half years ago, is written in the style of

Things I said and did (followed by)

Thoughts that went through my head

I signed you up for cross country, because you love to run and you're good at it without half trying. I encouraged you to go to the optional practices over the summer. I got you contacts, so you wouldn't have to run in the rain with glasses, though it didn't rain, not once in two months. I even managed to become part of a carpool.

This way you can start off knowing people, which should help, with you being so shy.

At the first meet I was so frustrated. "Why is she running so slow? Look, she's just laughing and jogging along!" I felt myself getting antsy and angry, but I didn't show it. I said you did great, and that I hoped you had fun.

What is my problem, why do I care? I don't, I don't care if it takes her 20 minutes to run one mile, but I care that it doesn't, and that she's slowing herself down. It makes me angry, but not at her, at life. It makes me sad. Everything these days makes me sad. What a strange feeling, to be sad all the time, after a lifetime of never being sad. It's easier to be angry. I know what to do with anger, but not with this constant feeling of emptiness. I care because she's interested in running and I'm not interested in anything anymore. I can tell how much she loves it and how much she looks forward to it and I try to think of things I look forward to, and I can't. I used to, even in the hardest times, look forward to things: working out, having sex, eating breakfast, writing, talking to people. When did everything become such a burden?

I emailed the coach after the second meet. I felt like a helicopter parent, but I did it anyway. I told the coach I thought you should pace to someone faster than you. I said if you paced with someone slower, you would slow down so as not to leave the person behind. I told her you would never say anything, that you would always do what she asked. I said that if you had someone faster to pace against, you would see that as a competition with yourself, and you would push through in a way you would not if you were told to compete against someone else. I told her I knew nothing of running, but that I knew you.

I can't even physically run. I haven't been able to run without excruciating pain since my car accident in 1984. Coach, you weren't even born then. And it's not a matter of her doing something I can't do and living vicariously through her. So many of the things she's good at are things I can't do at all. Running, sewing, knitting, the goddamn sudoku. I love that, I feel no wistfulness or regret or envy. We all need to be ourselves.

I watched your time plummet every week. You were put on "varsity" at the beginning, even with over 17 minutes for two miles. Then, right away, after I emailed the coach, we saw you get 15 minutes. 14:25. 13:40. 13:17 qualified you not only for sectionals but as the second fastest girl on the team. After every race, I marveled at how you didn't seem tired, even when it was 95 degrees. You just ignored everyone right afterwards, got some water, took a breath for a minute, and then...you were fine. Like you hadn't just raced at all. Once you got under 14 minutes, you turned to me and said, "I guess I've found my sport."

"So what changed? What's your strategy now?" I listened to you tell me that you liked to hold back. You said you liked to catch up to people, to see how many people you could pass.

This is your thing, this is your survival. I know how to get out of a place, any place, no matter what. Your brother knows how to scream and rage. You know how to do this. Remember the survival game in the woods? I asked how you stayed "alive" so long. You said that you stayed with a pack of boys at the very beginning so you could get out. Then, you ran as fast as you could and hid in the woods, using your smallness to hide as you looked for the fake food and water. You told me that you figured no one could see you. And if they did, well, then they'd have to catch you. How did I raise my kids to understand survival so clearly? Or hell, how else could I have raised you, being me?

I asked if you had used the strategy that I and the coach had suggested, to pick someone faster to try to catch, and you said you had, but that person kept changing, because you started beating the girls you didn't think you could beat. You said it helped to know the person you were trying to catch.

I fought with you because you were so impossible for the few days before sectionals. I tried to stop myself from being annoyed with your attitude, but I couldn't.

I'm frazzled and anxious all the time, I feel like my heart is beating out of my chest. The smallest thing sets me off. I want to get a divorce or quit my job or move or all three but I know enough to know I don't want to do those things, because I know I need help, that all of this has caught up with me, not just cancer but all of it, I know that now, that it's not "just" chronic PTSD over the last seven years but probably the last 30, for too many reasons to name. And I'm sorry that I don't have the patience, but I've never had patience so that's not what I'm really sorry about. I'm sorry about all of the rest of it. But you still can't talk to me like that.

I told you to just go out there and have fun, and I meant it. I said it was so exciting to make it to sectionals as a sixth grader. Just run as fast as you can and don't worry about it, I said.

Why am I nervous?

I didn't run the course to see you at different points in the race, like your dad and brother and many of the other fans. I watched the start and stayed at the finish. I saw your teammate coming in second, and cheered loudly for her. And then I saw another red jersey in the middle distance. Oh my God, I said. That's Lenny.

After, we learned that you came in ninth, at 13:04, and as soon as your next teammate crossed the finish line, she found you and said, you did it Lenny, you made state! Congratulations! And she tried to hug you, as did the other girls, and you kind of half hugged in return. An 8th grade boy told you not once or twice, but three different times, great job Lenny, great job making it to state! I said, holy shit. She's going to state.

Isn't it awkward when people hug you? I know, I know just how that is. I know you don't know what to say but damn it, at least say thank you. Good, you said thank you. How many times has that boy tried to talk to you? Not just today, but all season? How much more could you be exactly like me and not like me at all?

But before that, before I thought all of that, I said, Oh My God. That's Lenny.

Here she comes. I can only think of one thing to say. 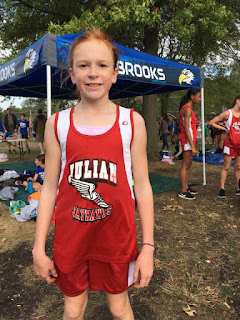