I haven't written a blog post in over two months. That last one was a bit of a mic drop for me; I think in many ways, I am done writing about cancer (if I ever really wrote about cancer here--this blog has always really been about something else). And yet, I do miss writing. I plan to use this platform for writing about a variety of things, both personal and political. But today, at least one more time, I have something cancer-related to say.

Three years ago today, I learned my cancer was back. Facebook reminded me of what I said that day:

I love my husband. I do. The sitter dropped the kids off and he ran around catching lightning bugs with them while I finished writing. I thought I could handle it and I went downstairs to talk to them and they were playing with play-dough and so innocent and my son's voice is such a little boy voice. Gabe was in the kitchen. I went in there and shook my head and said I can't do it and started crying. He said OK I'll take care of them and why don't you put the dishes away or something. And I was thinking huh you random son of a bitch. But by the time I was done, I was more than finished with crying. And I took a deep breath and went upstairs and put them to bed, reading the super sentimental books about their names that we had made for them when they were born because that's what they asked me to read. And I sang to them and kissed them and I didn't cry. Here's to ten years of finally learning how to distract another person away from her grief. Put that one in your vows. You just might need it.

It's hard to think back and try to place myself there, in that place, having to face my children, again, knowing what I knew. I remember telling them both about my cancer two days later, but I don't remember how it really WAS for me that day. The words above help place me there.

And so I could write about three years, but I'm not going to do that. I'm going to write a bit about how a little girl moved into the house two doors down three months before we were bound to move away. My children have lived in two different houses in their lives, but both are in the same neighborhood. We are leaving the city proper after 12 years and moving back to the suburb where I grew up, where my mother still lives, where some things are the same but many things are unrecognizable. My children are at once excited and devastated to be moving.

One day, shortly after we saw the moving van, an 8 year old girl rang our doorbell. She wanted to meet my kids, who were initially too shy to speak to her. After she left, I forced them to go find her. And just like that, they were gone. Somehow, the three kids bonded like they had always known each other. Like many kids in this neighborhood, she attends the local Catholic school. She and my son immediately began arguing about religion. It didn't seem to faze them, and just became a part of their routine. Her school let out weeks before theirs, and sometimes, I would see her waiting patiently outside, wondering when they would be home.

They disappear for hours and play the way we used to play, back before playdates. They have other friends whom they are natural with like this, but this time, they formed this bond themselves, outside of their parents' influence or the commonality of school or sports. They set up lemonade stands, they play sports with made-up rules as three is an odd number at best, they jump on a trampoline, have water gun fights, go to the park by themselves, bring each other popsicles. When we went on vacation recently, we left a note and $20 with the neighbor girl, asking her to feed our fish and bring in our mail. When we returned, this was left in our living room: 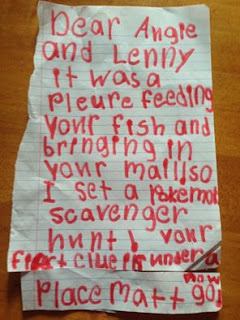 My heart wrenches for them as they are cruelly reminded of what we are asking them to give up, even as I know we are doing the best thing for our family. Children do not control their own lives, and that is a fact we all live with, whether we like it or not. To some extent, none of us has control, which is something I've been saying for years, but is the last thing anyone wants to hear. In this case, we, as parents, made a decision. It's a good one, but we are not the only ones impacted by it. We will all miss this big rambling house on the hill, the house we thought we might grow old in, the house with three ovens in the kitchen and a screened in porch a half block long and a second floor laundry room, the house with its own sledding hill, the house with its light-filled spaces and places to hide. We will miss our friends, but those of us who are grown can always control when we see them again, something our kids cannot do. We will miss a lot of things.

But this? This new friendship, the one that barely got started, is the one that makes me pause. All three of them have known this is the only time they'll have together, this way, to do what they've been doing in secret and in legion with each other. They have one summer together, not even that. It's a season they will always remember. I wonder if they think about it they way I do, if they wonder what will happen to her, how it might have been if they grew up together. I don't speak of this, of course. I just tell them how quickly they befriended her and how that will happen again in our new neighborhood.

You never forget the people who teach you how to leave.

We're starting something new, and I'm sorry, but I'm not. Here's to the anticipation of our new entrance, and to the most graceful exit we can manage. We all know how to do this.
Posted by Katy Jacob at 11:53 AM 1 comment: