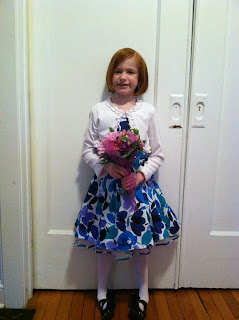 Today, my daughter turns 8. It is her Golden Birthday. We never celebrated that when I was young, and I would have been 22 on mine anyway, so I don't suppose I would have been paying attention. This day is special for many reasons.

And I really have no idea what to say.

Or, at least, I don't know how to say the right things.

On a day of celebration, is it wrong to acknowledge the obvious, even if it is morbid?

My daughter is 8. When I was first diagnosed with cancer, she was 4.

She has lived half of her life with a mother with cancer.

She has always been the sensitive, quiet type. And I don't mean she is literally quiet, though I suppose around strangers she is; she even manages to act shy around her closest friends until she warms up to the idea of them being there. I mean she is quiet in that she's not talking. She keeps everything to herself--especially the bad things; her fears, her concerns, her pain. This is the kid who potty trained herself at 2.5, and in the middle of the night we would hear her get up, run to the bathroom, flush, wash her hands, and put herself to bed. She would take care of her own nosebleeds, no matter how severe; sometimes, we would go into her room in the morning and witness the blood bath. Why didn't you come get us?! we would ask, and she would shrug and say, "I didn't want to bother you." She is not particularly affectionate, has never been cuddly.

When I was 8, I had epilepsy. My medication was very toxic; it poisoned my liver, sometimes gave me horrible stomach cramps. One night, I felt these pains, but they were more intense. I stayed in bed, curled into a ball. I didn't want to wake my parents. It got worse and worse until I realized I needed to tell them, so I got up from bed...and promptly fell to the ground in agony. I had to crawl to their room. I was rushed to the ER, kept in the hospital for a week and finally diagnosed with a toxic overdose of anticonvulsants and (temporarily) "cured" of epilepsy. I went through tests in that hospital that were absolutely excruciating.

I never said a word.

So, I get it. I get where she's coming from, and while I am her mother and I would love for her to open her heart to me, I am not selfish enough to believe she owes me that. I don't believe that there is anything wrong with being the stoic one, the one who fails to reveal herself, the one who is always thinking about something that no one would ever guess. I believe that we greatly influence our children, but we don't make them who they are. They get to take credit for that, all on their own. I didn't make Lenny, I just carried her. I said it before, when she turned 5:

Regardless of what convention tells us, we did not make you smart. You were alert from birth, watching us, waiting to learn about the world, too interested in everything to sleep. We taught you to read, never used baby talk with you, assumed you had some reason. But when you pointed to a photography book at your grandmother’s house when you were fifteen months old and clearly said “Signs” (the title of the book), I had no more idea what to make of that than anyone else. The things you know continue to amaze me years later.

We didn't make her the way she is, but living with us has changed her. Living with a mother like me has changed her. She will probably never really remember a time before cancer entered our house. I have lived long enough to see Lenny live a second lifetime of four years. I have no idea if we will be able to say the same in 4 more years, and even less of an idea if I will be here to see her live another lifetime from now and turn 16. I don't know, and she knows I don't know, and that is a burden she will carry, and while I do not feel guilty about it, I do feel sorry. I'm sorry that in the midst of the cake I baked and the balloons and streamers I bought and the party I planned and the gifts that I wrapped that I am also the only mother she knows who would write something like this on her birthday.

But I am doing this for her, for them. I am taking account of things they might be too young to remember or too innocent to comprehend. I am remembering for them.

So, Lenny, know that I love you. You aren't just golden today, but always. 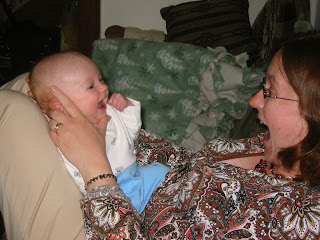 Walking
(For Lenny, Who is 1)
by Katy Jacob

It’s started again.
The whole cycle, the twelve tests.
Because we live here,
you get to see it all at once—
early heat, a river of ice,
eighteen shades of blue.
Or you would, if we let you out.
But the world around the living room table
is a grand place, it exhibits signs
of what is to come, or what is possible.
Cold grooves in the floor,
hairbrushes, paper and keys,
a place to hide things.
You’ve put your faith there.
We can’t know what will happen
in your mind as you let go.
When you do, we’ll sink back
into ever lightening evenings,
and touch this table,
knowing that’s where you learned
to let your heart leap up
as your feet traced a month’s worth of days.
And knowing too that we are not the only ones
who impatiently tell time
by how long it will take us to get to
the places we’ve never been
from the place someone who loves us
will always want us to return. 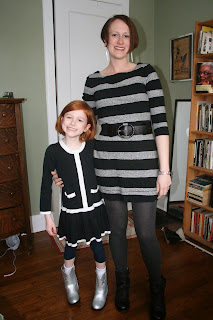