Gabe's got a new nickname for me. And no, it's not G-sticks (Getaway Sticks), a nickname I've earned from a few of my girlfriends for reasons that seem kind of obvious, nor is it "Face," which Gabe has called me for years (like the dude in the A-Team, but female). So what is it, you ask? Well, I'll get there. But first I want to get something off my chest (pun intended).

It's October. I love October. It's my favorite month of the year. I chose to get married in October. October is the anniversary of my losing the ability to walk when I was 9 years old, and I will forever mark it with inappropriate leaf-kicking in other people's lawns. But October is also Breast Cancer Awareness Month. I could write something about how ridiculous it is that I could buy auto accessories with pink ribbons on them, I could write about the Saving Second Base slogans and all of that, but I did a pretty good job in my last blog post of explaining why I think it's important to get some real voices out there, lest we be lost in the din of screaming pink. Instead, I am going to use this first day of October to provide some real breast cancer awareness, about what breast cancer means for those who have it and for those who love people who have it.

I'm going to talk about what we lose to breast cancer. Because of this disease, I have lost:

my breast, and no it wasn't replaced by a better one or a bigger one or by any one at all because I just have one breast now, along with a bag of saline on which my pectoral muscle precariously sits; according to some purportedly well-meaning breast cancer awareness campaigns, this means I have also lost half of my "essence of womanhood," though that seems like a huge load of crap to me; (and look folks! the one on the left AIN'T REAL!) 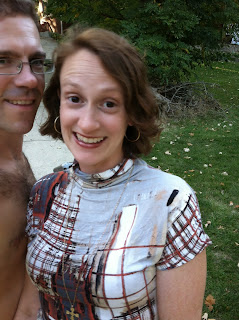 my hair, all over my body, including my eyebrows and eyelashes, but most obviously I lost the hair on my head, which I had been so famous for for a quarter century that when I was in the cancer ward, a woman I knew in high school who happened to be a social worker in oncology, saw me and gasped "oh Katy, not YOU. I mean, your hair was EPIC.";

all of the axillary lymph nodes on the left side;

the ability to sleep, sweat, and cry during the first round of chemo;

the expectation of living a normal life span;

the ability to convincingly tell my children that everything will be all right, as evidenced by the fact that when we called my daughter from the hospital this past weekend, she was so upset that she refused to speak to me;

the normalcy gained by not having to constantly engage in role reversals, as my mother grieves over things that have happened to me, my older brother watches me go through things that age me beyond my years, my employers have to listen to me when I dictate how things need to be with me right now, my kids bring me breakfast in bed when I'm sick, my friends rely on me to tell them how to act around me, and my husband doesn't know what the hell to do but manages pretty well all the same;

my libido and expected sexual function during my last chemo, as well as the ear of medical professionals who did not take my problems seriously;

the normal cycles of life, having experienced menopause 15 years too early and then, soon after that, puberty 25 years too late;

the joy of breastfeeding my infant son;

the ability to have more children, since many doctors consider my cancer to be "pregnancy related," and the risks are just too great;

inclusion in this club I didn't even want to be a part of, because I have had cancer twice now, and the culture that exists even within the survivor community, which focuses on cancerversaries and being NED and fighting, does not easily apply to someone whose cancer had the gall to COME BACK, whose cancer could not be killed by chemo, radiation, staying skinny, or engaging in copious amounts of exercise;

my proud claim of having no tattoos;

the relative ease of travel, since I can't really risk the extra radiation by going through the full body scanner, so I must be subjected to patdowns each and every time;

what little patience I ever had for bullshit;

whatever filter I ever had for my mouth, along with whatever caution I used to have that stopped me from speaking my mind all the time, every time;

too much weight when I didn't have it to lose;

any sense of anonymity, privacy or modesty that I might have had, as people feel free to judge me by every bite of food I eat or activity I engage in, while the whole entirety of humanity seems to have felt my breasts, and people I have never met believe they know how it is for me;

my sense of nostalgia, because the things I pine for are the things that haven't happened yet;

the expectation that I will live to see my children grow up, that I will grow old with my husband; even if these things come to pass, the EXPECTATION of them is gone;

my sadness, grief and fear over having had cancer.

All of these things are gone.

This is not to say that I am a broken person who has been beaten down by cancer--not at all. Speaking these truths does not mean I am negative, or depressed, or bitter; it simply means I can take stock realistically and still keep walking. Like all people who live with adverse circumstances, like all people who live with suffering right alongside the corn flakes they eat in the morning, I am still myself. I am still a relatively smart, resourceful, talented, fit,happy, goofy, sexual, irreverent, pissed off, attractive person, on whatever scale there is that measures those things. Cancer has taken some things, but not the most important things. Cancer has also given me some things--like nicknames.

My husband has taken to calling me Bourne. Why, you may ask? Is it because I am some no-nonsense, indestructible cancer slayer who takes no prisoners and takes even less shit?

No, unfortunately that's not the reason. He calls me that sometimes because of that scene in the Bourne Identity, when the two assassins are sent to kill each other, and they are engaging in a fight that neither of them understands, though they both know that they are different people than they were before the battle began, and they also both know that they will both lose to some degree in the end, regardless of who is left standing. He calls me that because at that crucial moment, the unnamed assassin looks at Jason Bourne with that sad, ageless gleam in his eye and says:

Look at us...Look at what they make you give. 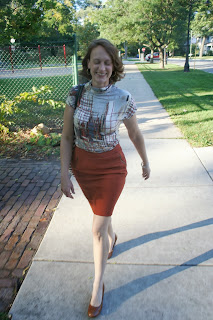