Sometimes, a baby elephant grows into a mama elephant. Right after receiving the following essay from Lulu Luke, she discovered that her fourth TNBC cancer had metastasized to her lungs. As you all know, metastatic breast cancer is incurable. Lulu is currently involved in a clinical trial for a new chemo drug that will hopefully provide benefits for Stage IV TNBC; many treatments for advanced breast cancer focus on estrogen positive cancers. Here is Lulu's story. The lines in italics are the questions that I asked her; with the exception of light editing, these are her words verbatim. 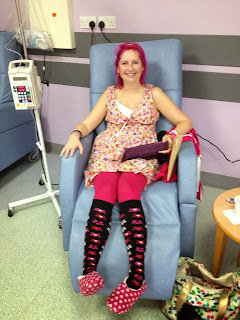 Tell me about yourself.

My name is Lynda Luke AKA Lulu. I'm a 45 year old mum to Hannah, 22, and Jamie, 19. Hannah has special needs and a mental health disorder. I work as a nurse. I actually work as a breast care nurse in screening and genetics. I started this job after my second diagnosis. I was first diagnosed in April 2006, age 37 with invasive ductal, grade 1, stage 1, breast cancer after finding a lump in my right breast. Treatment was lumpectomy and sentinel node biopsy, followed by further excision, radiotherapy and tamoxifen.

In may 2009, following my routine annual follow up mammogram, I was diagnosed with grade 3, stage Triple Neg ductal BC in my left breast. Treatment was lumpectomy and sentinel node biopsy, chemotherapy: Epirubicin x4 and CMF x4, and radiation. I had to stop tamoxifen during chemo but restarted it after this was finished.

In October, 2009, I had bloods taken for genetic testing and results came back in January 2010 that i was positive for BRCA2. In September 2010, I had a full hysterectomy with removal of my ovaries to minimise risk of ovarian cancer.

Tell me about your recent recurrence. You can tell me how you found out, how you felt, what you did, what the process entailed, or any combination of things that seem most relevant to you..

In August 2011 (a month after my 43rd birthday) after a delay of three months with my MRI scan booking being forgotten, I was diagnosed with a recurrence of grade 3 TNBC in the interpectoral lymph nodes between my pectoral muscles in the chest wall. I had a surgical excision and level 2 ANC, followed by carboplatin and taxotere chemo x6 and radiation to upper left chest wall. Both interpectoral nodes were positive; all axillary nodes were still negative. Path showed muscle involvement. Having had BC twice already plus a scare after chemo, I was actually quite calm about this diagnosis. I suppose I kinda was expecting it, as I had noticed the area getting slightly bigger. It was the same place as a scare at the end of 2009 but the biopsy I had at the time came back as fat necrosis, although the radiologist was pretty sure it was malignant at the time. So who knows?

Because of being a BRCA carrier I had an annual Mammogram and 6 months later an annual MRI. The mammo I had in November 2010 was normal apart from a cyst I had drained, so I wasn't that worried about this area, but by the time of MRI I noticed it was a little more lumpy so I made sure that bit would show up on the MRI.

When I was recalled I wasn't overly concerned at the start. But after clarifying what they had seen on the MRI the day before my ultrasound review, I went into melt down and panicked, cried, worried about the future for a couple of hours and got it out of my system. So when I went in and they wanted to biopsy it and they thought it was cancer, I was ok about it all.

Tell me what is different for you with this recurrence.

For me the second cancer was the worst. It was the one I feared the most, the one I cried about the most. The worry from the first one was cancer coming back so when I got no 2 that made it a reality. By the time no 3 came along I was like, what have I gotta do this time to get rid of the bugger. The biggest issue I had as always was telling my parents, especially my mum who had BC 15 months before my first diagnosis. She broke down after I told her about the first one, was hysterical after the second one, as I hadn't given any warning I was being investigated as I didn't want to worry her if it was nothing. On the day I had the biopsy for no 3, she and my dad went on holiday in Ireland and I was worried about her reaction if I delayed telling them until they were home, so I phoned and said the doctors were worried and I'd need a biopsy. I'd actually had the biopsy and fine needle aspiration and knew the results had shown a malignancy, but I thought that was enough info to keep them informed without spoiling their holiday completely.

Tell me how you feel about the notion of being a cancer survivor.

Personally, I hate this term. I'll only know I'm a survivor of BC when I die of something completely unrelated. In the meantime I live with BC and beyond BC. I live my life, I love my life and I don't want BC to take over my life even if does eventually take my life. However I am a self confessed BC bore. I have read lots about it. I work with BC patients, I have BC friends. But BC doesn't scare me. It doesn't stop me from doing what I want to do. It may even have encouraged me to do things I wanted and was a little afraid to do, to go places and experience things I might never have done.

I'm not one of those I'll do anything to stay alive type people. If I want a beer I'll have one, if I want a cake I'll have one. I don't deprive myself of things I like just so I can live a couple of extra months or years. I would rather live my life even if it's shorter than exist just to be on earth longer.

Tell me a little bit about how others have reacted to the news.

As I said before, my mum has been the hardest to tell. When I first found out I had cancer it was less than a year since she had finished treatment and she had been having more investigations as they were worried she had mets in her liver. Thankfully, she didn't have liver mets. When I told her on the day I was diagnosed I had BC too, she crumpled in front of me. When I got the second cancer after the first day of being in a blind panic, I'd convinced myself it was benign so again I didn't want to worry her over nothing. It wasn't benign; it was very malignant and it was my dad's birthday and when I told mum she actually was screaming... Totally screeching..... Like a banshee.... totally hysterical! She ran through the house to her bedroom and slammed the door and sat behind it crying. She was so affected by it.

When I got cancer no 3, I didn't see her reaction because she was away, but I think because I'd warned her she was actually much calmer; she was still very anxious but not hysterical this time.

Some of my friends, even my BC friends who work in a similar field, were saying it's maybe a mistake and it will be ok. I felt a little disappointed in them that they didn't just say 'sorry to hear that' or give me hugs or something similar. That whole "oh it must be wrong" makes you feel kinda not believed. Also all that brave, inspirational stuff gets spouted out yet again; I am not brave or inspirational, just doing what I have to do to get through the whole thing.

Tell me what you think it means to have cancer and what words you would like to use to define this experience.

Having cancer is rubbish. Having cancer treatment it really rubbish. Keeping on getting cancer and cancer treatment is really really really rubbish! However, along the way i have made some of the strongest friendships of my life. I have discovered who my friends really are and the strengths and weaknesses in those around me. It has led me to a field of nursing I hadn't discovered before and opened up doors to experiences I'd never have considered. I wish I never had it but I love all the things I've gained.

Tell me one or two specific anecdotes—involving people in your life, medical experiences, thoughts or dreams you have had, conversations with others, or things you have noticed in the world—that typify what this cancer recurrence means to you.

This cancer recurrence doesn't mean anything different to the previous two. Nothing special happened this time that may or may not have happened before. I just like people to know that have a recurrence that there is life after it. I feel lucky.... I know I've had BC 3 times but I was first diagnosed in 2006. I have lost so many friends who didn't make it. They never ever didn't have cancer during treatment; it progressed and took their lives leaving their kids without mothers. It makes me so sad still that my lovely friends Hazel, Michelle, Tina, Rhian aren't here. Some other lovely friends never got the chance to be mums like Sharon, Sarah, Gail and Karen. And yet more lovely girls are fighting a fight that they know they will never win like Emma, Angie, Sue, jennie, Lorna and Lynn. We go for lunch, we laugh, we cry, we drink pink fizz and cocktails and we have as much fun as we can because one day we wont be able to do that any more.

A recurrence isn't mets. A recurrence wont kill you any sooner than a primary cancer, it won't make you get mets any sooner. It's not the primary or the recurrence that gets you in the end. It's when the cancer goes elsewhere. Maybe one day they will be able to stop it from doing that.

Tell me anything else you’d like me to know.

Im a BRCA 2 carrier and although my mum had Bc at 57 only 15 months before me she is negative for the gene. I got it from my dad. My kids both have a 50:50 chance of inheriting it. If they do, this greatly increases their chances of developing certain types of cancer. I really do hope when they decide to get tested they are negative.
Posted by Katy Jacob at 11:41 AM