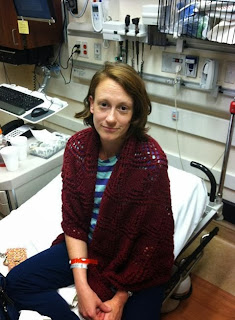 Some of you know how I have spent the last day or so. I had a fever, it got worse, I was told to go to the ER to make sure I'm not neutropenic and subject to infections that could kill me or about to have pneumonia or any number of a million different things that can happen when one is on chemo. We had to scramble to find a sitter to watch the kids for a few hours before a friend came over to watch them. I felt like shit, so I didn't want to drive myself; I also had flashbacks to the last time I went to the ER during chemo, and I drove myself thinking it was no big deal, and I was admitted for two days due to heart trouble. So I got prepared, and packed an enormous Harry Potter book, a toothbrush, deodorant, etc., expecting to stay a while. We drove out of the neighborhood to the hospital where I receive chemo, since I would rather be admitted at the place where all my doctors are.

We waited over an hour before I was called to go to a room, and I shakily stood up, wearing an attractive protective mask on my face, and at that very moment, this thing straight out of a TV show happened. The woman who had called me said, wait, go back, I was just called outside. Ten people went rushing out to the stretcher that had just been brought inside; we could all see them doing emergency CPR on this woman. I had to wait another 45 minutes to get my room. In the meantime, Gabe overheard the story, and at one point it sounded like they were going to call the time of death. Apparently this woman was having trouble breathing so she asked for her inhaler. A friend was driving, her son was in the car. And then--she stopped breathing and they were stuck in traffic. We all thought she had died. But later, when I was getting a chest X-Ray, we saw her, not looking well, but still alive.

I received good care, all of my labs and blood counts were good, and after six hours, we went home. My fever has subsided but I have been sick as a dog today; I weigh four pounds less than I did yesterday. I'm probably just sick, like a normal person; but the reality is that chemo exacerbates the effects. 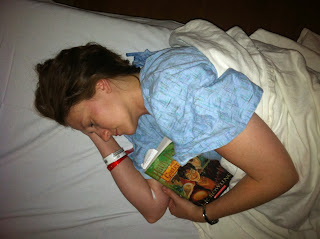 In the hospital, when the "real" doctor finally saw me, not the resident, not the med student with his flowing blond locks, I had an interesting experience. After hearing the litany of medical things that have happened to me in my life, he just kind of talked to me, as if he respected me and what I had gone through, so maybe, just maybe, I knew a thing or two. I refused the IV, because I hate them and I'm trying to save my veins, and said they should just take the bloodwork without it. I almost refused the chest X-Ray. And he just said, you're the patient, you can refuse whatever you want. We will do what you tell us to do. And then, he told me that I look great. I said, damn, people ALWAYS tell me that. And he said, well, it means something. I've seen people who just look...well they don't look good. You're not one of them.

Story of my life.

But he got me thinking when he said that they would listen to what I wanted them to do with me. Actually, a lot of things have got me thinking this week. A friend wrote a comment on one of my posts thanking me for being a voice for women with breast cancer, because she feels like she lost her voice the moment she was diagnosed. I've been pissed off about various offensive ad campaigns that make breast cancer seem like some kind of rite of passage, some kind of off color commentary, related to training bras and mammogram parties and all kinds of other ridiculous things. I've been thinking about the twitter pic someone shared where a woman posted a picture of herself with the caption: "sometimes I wish for breast cancer, so that I could do chemo, get skinny, and get a free boob job." I've been thinking about an article shared by a woman whose fourth bout with breast cancer has turned out to be mets, wherein this comedienne, who is a breast cancer survivor, claims that other women with breast cancer are just seeking attention and using cancer as a badge of honor because they have low self esteem. I've been thinking that this is the last Sunday of NFL football without convicted felons wearing pink shoes. I've been thinking about the enormous amount of appreciation and love we have received after posting that simple interview about what Gabe thought of my mastectomy.

And all of that has led me to think this:

It is important to have a voice, and to be a voice for others who feel they have lost theirs. It's especially important for women. It is important because if we don't speak for ourselves, someone else will speak for us, and what they come up with will be a huge load of bullshit.

Breast cancer is a celebrity disease. Everyone knows us, everyone understands us, everyone lives in our bodies and our minds and our lives. Except they don't have a freaking clue. When I had epilepsy, I did not feel the need to talk about it much, in part because my experience with it was relatively manageable, but also because no one was out there telling me how it should be for me. Epilepsy was not a JOURNEY. It was not a rite of passage, a stepping stone to a better understanding of life. No one elbowed me in the ribs and talked about the shit going on in my brain. No one told me I would stop having seizures if I just had a better attitude. It was an illness. A neurological mistake. A thing that led me to take poisonous medication that eventually reached an intolerable level of toxicity in my little body. A condition that left and came back and could come back again, any day now. No one told me how to define it, how to live with it, and so I did it my way.

And I learned things. I learned to not always trust doctors. They have egos, and sometimes they're wrong. My car accident taught me the same thing about the police, and government officials. I learned to speak up for myself, at 8, 9 years old. No, I won't sign that form until my parents are here. Mom, I don't want to take that medication anymore. I learned to stand up for myself, to tell other kids who said that people with epilepsy were "retarded,": Really? Well, I have it, and I'm in your class, so what does that say about you? I learned to explain in straight language why I was in a wheelchair and make no apologies for it. As a teenager, dealing with all the sexual harassment and all the things I've talked about before, I learned to be mean, to fight with my fists, to yell and be a bitch and do whatever I needed to do to protect myself.

As a cancer patient, I have fought with my doctors, disagreed with them, refused certain forms of treatment. And all of that has led to positive, not negative, outcomes for me. Screaming like a crazy Medusa, long curly red hair flying and blood on my gown from the mammogram they made me do soon after my first lumpectomy, got me brought back into the doctor's private office to read the radiology results myself. Crying and invoking my status as a young mother of a baby after I learned that I needed a second lumpectomy got me a surgery date 16 days earlier than what I had been offered. Standing my ground and looking the oncologist in the eye enabled me to take a form of chemo this time around that is less toxic and less likely to lead to long term permanent damage if I am lucky enough to live that long. Refusing reconstruction in an adamant, stubborn voice, was the only reason I was offered the one-step reconstruction that spared me multiple surgeries and long recovery times and enabled me to wear a bikini ten days after my mastectomy. And so, women with breast cancer, that disease everyone knows so well, I'm telling you this:

We don't get anything from silence but someone else filling the void.

I understand that not everyone is like me. Many women don't like to fight, don't like confrontation. Women are taught to see the best in people, to believe that when others speak for them, they are doing it out of a sense of compassion, even if that's not true. Many women don't know what to say, whether it's about cancer, or sexual abuse, or gender roles, or what have you. And that's why I do this. Because every once in a while, a teenage girl writes me to thank me for what I wrote about the issue of consent, and she shares it with a bunch of high school kids I will never meet. Every once in a while, a woman writes that I have written something that has helped her gather her thoughts and understand herself better. Every once in a while, I can give someone else the gift of having their voice heard, such as when I interviewed my husband about my mastectomy, and he really didn't want to do it, and I had no idea what he would say. But I live here, and I know what it has meant to him to see the response we got from that strange little moment of public intimacy.

And of course, more than anything, this has brought me back to myself, to the real Katy Jacob, the one who was always thinking about things in a strange and circuitous way. People the world over might think they know all there is to know about breast cancer, about women, about femininity and sexuality and gender roles and marriage and friendship and parenthood and everything else; people might think they have a right to tell you how it is for you, or how it should be for you, but being me and doing this allows me to say this:

My story is mine to tell, but this story sits inside a much larger story, one that relates back to all the people, those I know and those I don't know, those I've met and those I might never meet, those whose voices are much stronger than mine and those who will never speak. It's just a story, but it's not a simple one, and it's not exactly what you might expect.

But by telling this story, all along, since I was a little girl, whether softly or loudly, I have claimed myself before anyone else had the chance.
Posted by Katy Jacob at 12:34 PM