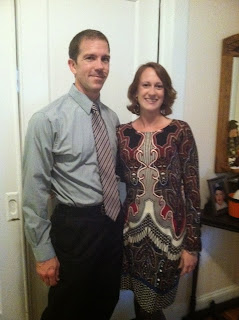 I haven't been here in a while. I haven't had much to say about cancer. I haven't felt much about cancer either. I'm just living my life, and my life is very busy with a new job and little kids and then, the chemo and everything. I don't think about cancer that much, which might surprise you. I do think about life a lot though, and cancer might have something to do with that pondering, but it might not--that might just be Katy being Katy like she's always been since a child.

I've been thinking about relationships, and marriage, recently. I wrote a really short blog post for my 9 year anniversary, but that's not what I mean.

I've been thinking about how happy I am not to be dating, since I'm not sure I was ever very good at it, even though I had a lot of practice from about age 12 on, but also since I'm happy to be in this stable place in my life.

No one needs to get married. No one needs one partner. It's a choice, not a requirement. Lots of people lead happy lives by themselves or with multiple partners or what have you. I never had a vision of myself being married; in fact, when I used to think about myself having kids, I always envisioned myself as a single mom. This life I lead takes me by surprise, and it takes my husband by surprise too, I'm sure. We both had grown-people problems as teenagers, we both grew up in strange circumstances (him much more than me), we both had suffered in our youth and faced the notion that life was just hard before anyone had to tell us.

We both probably had our ideas about what we WANTED in a person, what we didn't want, etc. There are so many qualities in people that you can enjoy and desire and be repelled by and despise. So much of that is immaterial. If you do make the decision to lock it down with one person, what does that mean? Who should it be, who should you be, how should you both behave? What are you supposed to give to each other?

Many people have this belief that going through something like cancer makes you stronger as a couple. I've been pretty clear that I don't think that is necessarily the case. Cancer has made me less patient, less tolerant of bullshit, and it has brought us to some very dark places that neither of us ever wanted to visit. But on the other hand, cancer has in some ways shown me the bare-bones version of what a marriage IS.

Forget what you want. Forget what you think you need. If you are in a lifelong or semi-permanent or committed relationship with another person, what you should be for that person is this:

You should be a co-pilot, a partner in crime, a second--a lieutenant.

I have just spent the last hour with my husband, having my little buzz shaved off for good. I really liked it for the two weeks that I had it, more than I expected. I felt comfortable going out in public with it. But I couldn't stand how it was coming out constantly, even while I was brushing my teeth, even while I was wearing a scarf. My head was hurting all the time with the little hairs pulling, making it hard to sleep. I was starting to look like I had mange. So Gabe got his new clipper set out and went to work. I just looked more ridiculously mangy and we both agreed that wasn't good. So then he got out the Barbasol and safety razor and started a long slow process of shaving my head smooth. I started to cry those dry tears and I'll admit I'm doing it even as I write. What kind of fucking medicine makes it so that you can't even really cry? Gabe is more of a crier than me by a large magnitude, so that started him off as well. There we were in the bathroom, both crying, hair all over the floor, my hair all over his shirt. He said he never had a father to teach him to do this right (to which I wanted to say, do fathers and sons often shave each others' heads? but you know, I don't have an answer, being a girl), and even if he had, he never in a million years could have pictured himself doing this with me.

There's the whole in sickness and in health part of your marriage vows. But then there's standing in your basement bathroom with your wife wrapped in a towel, sitting on a stool, while you shave off all of what's left of what used to be her really pretty hair and then you take the expensive after shave that your mother in law gave you for christmas years ago and rub it all over her head, feeling guilty that you gave her razor burn. And you tell her that she looks sexy, though she knows that's a lie.

And, on the flip side, you should be the one who recognizes this:

But there is something about (the experience of Gabe shaving my head) that sticks with me, thinking about it now. I interpreted Gabe's comment about his father, or lack thereof, as being probably deeper than it was. He wasn't talking about some life lesson he never learned. I think he was saying that he had never learned how to use men's clippers before; that should have been obvious since he was reading the instruction manual before he attempted a hack job on his own hair. I think he was saying, hey, I don't know what I'm doing, I've never used these before, because no one ever showed me how. Once the attempt to clip my buzz failed, he actually gave himself a very nice haircut.

I'm thinking about the days when Gabe doesn't use the electric razor on his face and goes for the Bic. It's often not a pretty sight. There are cuts, bloody kleenex on his face, razor burn that lasts for days. Three days ago he shaved my entire head--huge heaps of short thick hair--with a disposable razor and a 79 cent can of shaving cream. And I had not one nick, not one spot of blood. My razor burn was gone within an hour.

It doesn't impress me that he shaved my head, that we cried, that it was hard. The image I'm keeping is of me sitting still, watching the whole thing in the mirror. What I couldn't see, the part that really means something to me, is his perfectly steady hand.

You might want a lot of things, you might think there are needs that people can fulfill for you, but you would be wrong. Cancer has taught me a few things, I suppose. What we all could use is a person who can do hard things gently. We could all use a co-pilot, a person who tries to save you both when you are unable to save yourself, because he volunteered, because that's what the job required, because he wanted to play a role in how the story ended, because what you do together is life and death and all the things in between. 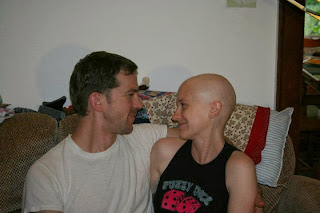