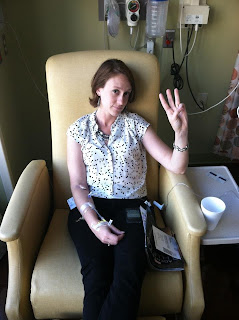 I'm so over this idea of the new normal. What is normal? Who is normal? Have I ever been normal even for a single day? Why is normalcy even the goal?

We cancer patients hear this all the time. This is your new normal. Here are ways to cope with the new normal.

There are all kinds of things I've been thinking about writing, and all kinds of other things that I have done instead because I get too pissed off thinking about stuff. I think it is a grave injustice for people to talk about the new normal to folks who have had cancer. First, there is the assumption that our previous lives were "normal," and that cancer is just this huge bitch-slap in the face that destroys our sense of self and makes us call out the injustices of the universe.

I call bullshit on that.

Breast cancer is a terrible disease. The treatment for it is brutal. The surgery is disfiguring. And no matter what the "survival" statistics state, 30% of women with early stage disease will later be diagnosed as metastatic. So the death rate is at least 30%, since metastatic breast cancer is lethal 100% of the time.

And yet, it is. Cancer afflicts people from all walks of life. That is true of all kinds of suffering. It is not abnormal to suffer, for life to be hard and even debilitating. That is a pretty regular state of affairs. I have conflated my experiences with epilepsy, my childhood car accident, and even sexual harassment and abuse when talking about cancer not because I think they are the same things, but because in some strange way all of those things prepared me to do this without having the same burden of other women for whom breast cancer is one of the first really bad things to befall them, or at least one of the first bad things that changes their bodies and their physical abilities.

It's hard to not be able to walk, or go to the bathroom by yourself. It's hard when your brain misfires 100 times a day. It's hard when other people see you as a body to try to use or hurt for their own selfish purposes. But experiencing these things does not mean that you are suddenly ABNORMAL or in need of a new normal.

It's just life, the way a lot of people live it, and it's better than many people's lives.

I mean, look. I don't want to be in menopause at my age. Everyone knows that. I want to hold on to my cycles and my sexuality because they are mine and because it's not my time yet. But 50% of the human race will go through this change if they are lucky enough to live long enough. And people do it. And then we turn this huge change in life into some kind of punch line, because we don't know how to deal with women and their issues, and we don't know how to deal with anyone and their suffering. There is some kind of collective desire for it all to just GO AWAY, it seems.

I have never wanted to "get over" my various issues in my life. I have never felt that they should just go away. I have always just wanted to learn how to live with them. I've used this analogy before--it's like when the women's magazines try to tell skinny girls like me how to find jeans that hide/distract our big booties. Um, I don't want to hide it. I just want pants that fit.

That's it--I don't want to get over it or make it go away and I don't want to sit here in some weird ennui of new normal. I just want to fit cancer into my life, because I have to, so that it doesn't try to take over and fit me into it.

When you throw normal out there as the goal, it has huge and unfortunate consequences. I have heard from young women--some of them so much tragically younger than me--wondering when they will feel that their reconstructed "breasts" will feel normal.

Oh honey, I hurt for you. Because you had cancer. Your breasts aren't breasts anymore and there's no reason they should look like real breasts, because this is what cancer looks like, and none of us will ever have our 23 year old breasts back and the surgeons of the world should STOP USING THAT AS THE MEASUREMENT OF SUCCESS. I have one normal, even kind of perky breast. But it doesn't look like it did when I was 18, because I nursed two babies with it. I have one thing on my chest that has a scar, no nipple, and is cold to the touch because it is a bag of mfing saline, people, not a breast, because that shit was trying to kill me, so I don't want the normal one back, thanks. When I hear women feeling so sad about their "new normal" bodies, it breaks my heart. But my heart only breaks momentarily, and then I revert to myself, and I tweet things like "It becomes obvious that the AC in the office is jacked up too high when you only have one nipple. #justsaying." The things that happen in life are absurd, and we had better be able to admit to the absurdity or even revel in it, because sorry but I don't have time to cry.

And being bald, or fatigued, or having bone pain...these things are difficult, true, but why so much emphasis on acting as if they are not happening? I'm sorry, if my hair thins on this chemo, I'm buzzing that shit. I don't care if I look normal. I don't even know what that means. Was it normal to have long curly red hair? No, it was not, since only 1 in 100 people in the world have this hair color. Bald is bald is bald and so fucking what? And if I'm feeling that crushing fatigue that I felt for a few days during the last chemo cycle, yes, I am nuts, so I will force myself to go to the gym or take a long walk in order to feel better, but I will not feel one iota of awkwardness if I get off the bike and go sit down and people worry about me or whatever. This is chemo, folks, and this is NORMAL for chemo.

I did my third of twelve chemo infusions today. That's #11 for me since July 2010. When all is said and done I will have done 20 chemo infusions during the prime of my life, along with everything else. I'd like to think this will be over in January and I will never have to do it again, but on the other hand, women with mets do this for the rest of their lives, which are too short, and I know that. I hope I don't suffer long term consequences, but I recognize that I might. Cancer has long term consequences. That's the nature of the beast. That's the nature of many beasts. The body is a fragile thing. But that does not mean that those of us--so many of us, in so many ways--whose bodies suffer are ourselves fragile beings in need of reassurance that we are still ok, still normal. Maybe we are not normal, maybe we never have been, maybe at some point down the line we stopped caring about that.

Almost a year ago, I wrote a post in my other blog about Gilda Radner. And what is it that she said, that has inspired so many people who have dealt with cancer in their lives? Did she say that she wished for normalcy? Hell no. What she wanted is what we all should want, because it's the only real thing: