Day 1,184: A Man's Perspective on Mastectomy 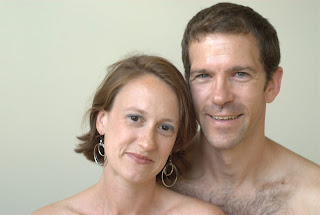 K: OK. We won’t talk about that part anymore. What about when you found out I had to have a mastectomy?
G: I guess that was inevitable.

K: Did it make you sad?
G: Absolutely. Your breast is a part of you.

K: What about thinking about how I would look or whether I would be sexy or whether you would still be attracted to me?
G: I love you and I care for your body. It’s a part of you. It’s one of many aspects of you that makes you who you are and losing a piece of that is sad. But it’s just one tiny facet. I was worried your reconstruction would fail and you would go through all kinds of extra procedures and infections and they’d have to pull the whole thing out and start from scratch. I kind of didn’t want you to do the reconstruction. It seemed like a waste of time and energy.

K: Would you have thought it was weird if I had just one breast?
G: I think it’s weird that you have cancer. I don’t think that anything else matters in comparison to that.

K: OK, so I did decide to do the reconstruction and I looked at it right away and it seemed ok to me. I wasn’t sad and I didn’t have body dismorphia. What do you think about it?
G: I was worried about a big surgical seam in a part of your body that’s under pressure from an inflatable bag. But now that it’s healed and the necrotic flesh has been removed (!!) I don’t usually think of you as having only one breast.

K: What about the lack of nipple and the scar?
G: The lack of a nipple is sad. It’s like having a toe or finger cut off. It’s a sensitive area and you don’t have it. The scar is just like your merit badge for being a cancer survivor.

K: How do you think I look when I’m naked?
G: I think you’re gorgeous and you have an amazing body and I barely notice the fake boob. You know when they have those pictures of people they want to keep anonymous so they blur their faces? The fake boob is like a blur over that part of your body.

K: Do you think it affects our sex life?
G: No.

K: It must be different touching that though.
G: That breast has been kind of hands off for years since I gave you that mastitis so I don’t know. But it does feel cold relative to the rest of your warm body. That’s a little strange. I mean in the winter will it freeze?

K: I think you’re going to get shit for saying that. Anyway, it’s almost October, and we’re all going to be inundated with obnoxious crap about boobs and tatas and second base and cancer. Does me having a mastectomy change any of your feelings about that stuff?
G: No. It has always pissed me off. It trivializes and belittles a really serious problem. We don’t have a rescue the willies month for prostate cancer. For men’s problems, we take it seriously. For women, I guess we figure you should just suffer anyway because medicine was designed to help men. Old white men in fact.It’s you having to do chemo again that really makes me just (long pause)…furious. I think it’s wrong that so much money and research has been devoted to new chemotherapies to prolong life a little bit as opposed to more work to determine if chemo is even necessary.

K: Well, it’s only that effective for me because my chance of recurrence is already low. And obviously I did everything and my cancer came back anyway. So are you saying that you don’t think I should do chemo?
G: I wish you didn’t have to and we’ll never know whether it worked or not.

K: If I’m still here in 10 years maybe it worked I guess.
G: Or maybe it wasn’t necessary.

K: Do you think I’ll be here in 10 years?
G: I don’t know. But I intend to make the most of the time we have together (crying).

K: Sorry, I didn’t mean to make you cry. Anything else you want to say?
G: I love you no matter what.

K: Any last words about the mastectomy?
G: I hope you never have to use the implant as an emergency hydration survival tool during the zombie apocalypse.

K: OK we’re done here. Can you go help the kids with their bath?
G: Yeah ok. I didn’t want to do this interview but it wasn’t as bad as I thought it would be. I wish it wasn’t necessary to talk about any of this. I wish you didn’t have to do it.