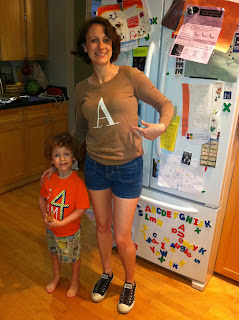 “The prime purpose of being four is to enjoy being four; of secondary importance is to prepare for being five.” –Jim Trelease

My son turns four today. He is a boy now, no longer a baby, creeping deeper into a childhood that will lead to an adolescence that I still fear I will miss. Every once in a while, I can envision what he will look like when he’s older, or daydream about whether his nutty personality will translate into years of entertainment or danger. I don’t have as much reverse nostalgia as I had in 2011, when the sight of boys of just about any age could send me into an unexpected tailspin of grief, but it’s there sometimes all the same.

I am not one of those mothers who laments the time that has passed. I don’t get wistful over babies or clothes my kids have outgrown or memories of their past selves. Perhaps I would have never been that way, as I am not particularly sentimental. I’ll never know now whether that is the natural state of affairs or the change in perspective that cancer brought into my life. I am the mother who gets this aching feeling when I think about my children’s future selves, the various phases and ages that I can only imagine. I would love to speed up time and see them as adults, safe and secure in their grown up sense of themselves, but of course I don’t want to miss everything as it actually happens.

Reverse nostalgia; one of the side effects of cancer treatment that I didn’t see coming. I don’t know why I feel this more intensely with my son than with my daughter. Perhaps it’s because I am a woman, and I was once a girl, and therefore I can see her in myself and imagine her in ways that aren’t available to me with him. Or maybe it’s because his personality is so extreme and I don’t know how in the hell that’s going to play out over time.

Or, maybe it’s because he was just a baby, nursing happily on my cancerous breast, when our lives turned upside down, and I had no idea back then if I would see him reach kindergarten. Of course, I still don't know that, but the possibility is seeming more and more likely as time passes.

Four is an age that is often overlooked. People have few memories of four. Children aren’t enrolled in traditional school yet. Sometimes, preschool friendships survive into adulthood, but not often. Adults are prone to underestimating the feelings or experiences of kids that age. At four, you are too young to make big decisions, but too old to be immune from the ramifications of small decisions.

What can happen at four that really matters?

When I was four, my mother died. She bled to death internally after an operation. She was resuscitated and brought back to life. She was in a coma for weeks, in bed for months. My grandmother took care of us during that time. There was a huge snowstorm that year that effectively shut the city down, and I walked to preschool through snowdrifts taller than me anyway. When I was four, I stopped sucking my fingers. I could read and write and I kept stats at my brother’s little league games. When I was four, the only decade I had ever known turned over. When I was four, things happened that were important.

When my daughter was four, I was diagnosed with cancer. She spent almost her entire fourth year dealing with a mother in aggressive cancer treatment. And yet so many other things happened as well. I just asked her what she remembers about being four, and this conversation ensued:

L: Oh, I don’t know. That was such a long time ago.
A: But then, if she doesn’t remember, how will I know what to do when I’m 4?
L: It just comes naturally. You knew how to be three, didn’t you?

Ah yes, children don’t understand anything, do they?

My son is so little, and so old. He is so aggressive, and so empathetic. There is a storybook that we read where a bunch of animals have a sleepover, and the owl is left to play checkers alone because he is nocturnal. Augie always says that he would like to be in the story, so that he could play checkers with the owl, and he wouldn't be alone. He wants us to understand that he doesn't feel SORRY for the owl. He understands that the owl might be happy; he simply would like to offer to keep him company.

Augie is the one with rhythm, the one who can’t stop singing and who remembers every lyric to every song he's ever heard, who loves to get naked and ask inappropriate questions about alcohol, the one who looks jealous in a real, grownup way every time he sees his parents kiss. I’ve written about him before, but I often don’t know what to say. His personality is, in some ways, best-suited to short-form writing; Augie is like Twitter personified. He is just something else.

The things he says are just too much. Sitting at the breakfast table when he was 2 years old and could barely speak; he turns to me and says, 19 more years, mommy. 19 years until what? Until I can have a beer. When I asked him why he couldn't just listen, he said, You know I'm three, right mom? I'll listen when I'm six. This is the kid who, at two and a half, when asked what he would ask for from Santa for Christmas, got a really mischievous look in his eye and said: A Mountain. He's always asking about girls, always shaking his booty. Always giving us reason to just shake our heads.

Teenagers and young adults love this child. He steals the spotlight away from other kids, away from our daughter. He uses his cuteness to get his way, with other people anyway, since it doesn’t work for him at home. He is charming and manipulative and devious and willful. He’s funny. He loves animals; in fact he loves them enough to give up his mamas cold turkey so that he could watch the class hamster for the week of his birthday. Last Wednesday, I told him he couldn’t have the hamster come home with him if he didn’t give up his mamas at night. He looked at me and sighed. I know, mom. But not tonight. And he put one in his mouth and held onto the other one and would not budge. Not tonight. And then the next night, Thursday, the night before we were to bring her home, he gave his two mamas to his father, and he was done with them forever, just like that. 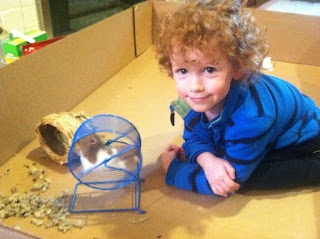 This one, where do his questions come from, how does he know what he knows? What’s behind those eyes? He will deliberately disobey me, make a mess, take his pants off, start singing and dancing, punch something and start making animal noises all within the span of three minutes. And then, he will pause. And he will ask me a question:

Mom, when we die, who is left alive?

And his father and I will raise our eyebrows, and his father will begin to talk about the memories that our loved ones have of us. I am a mother, so I say this: when I die, you will still be left alive.

And he will sigh, looking at us like we have obviously failed to understand the question.

And all we can do is look at each other, knowing that he knows what we know.

Happy four, kiddo. I’m so glad I was here to see it. Here’s to more years of you teaching me a thing or two. 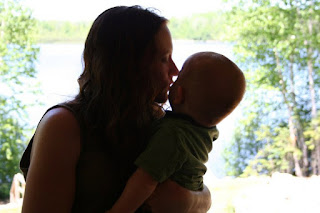