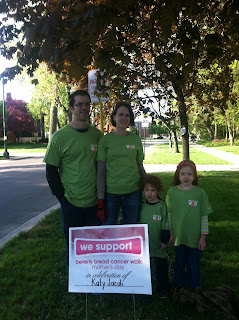 It's Mother's Day. That means that I'm supposed to write one of these, right? I should write a post less sad and fearful than the one I wrote on Mother's Day in 2010, for example. I don't have too much to say today, however. I had a team for the Beverly Breast Cancer Walk. I surprised the teenage volunteers when I walked up to the survivor booth to claim my ribbon and flower. I nodded at the people in my community who didn't know until today that I was one of "them." I did the normal mother's day things--like eating doughnuts and having too much coffee and spending time alone. My mom stayed over last night and instead of going out, Gabe and I played scrabble with her. By the way, if you ever want to feel the cold inevitability of despair, just play scrabble with me.

There are a lot of reasons that Mother's Day is meaningful for women in general and women who have survived cancer in particular. The day can be filled with a lot of happiness and a hell of a lot of sadness for a lot of reasons. I don't feel particularly emotional about it anymore. Because this forum is available to me, however, I will give voice to some things that make this day different for me.

of the last time I ever nursed my son, on this morning three years ago, because I had just been diagnosed with breast cancer five days earlier and I didn't know if I would have breasts anymore, and I knew for certain that I would have to do toxic chemotherapy that would poison him if I kept nursing. I never thought I would be one of those moms who would nurse a kid for two years. I would have with him, because it was so easy, but I never got the chance.

of the fact that I had always thought I would only want two children, but then I found myself wanting three, but I never got the chance to do that either. It would have been too risky from a recurrence perspective, and since I had two healthy kids already, I had to give up that idea.

of my husband's decision to take one for the team and get sterilized because we couldn't have any more kids, which cemented the decision to not have more children not just for me, but for him in the future, even the future where I might not be here and he might have had the chance to build a family with someone else.

of Gabe's grandma, who died less than a week before I finished cancer treatment and who always seemed to adopt the attitude that my cancer wasn't real, which actually didn't bother me.


of the fact that I have been through menopause and puberty both in the last three years.

of the moms who helped raise me, and the men and women who weren't moms at all but helped raised Gabe anyway.

of the two healthy kids I have that many women who had breast cancer when they were young never had the opportunity to have, because of menopause, treatment, death, or some other reason related to cancer.

of the four Mother's Days that I have experienced since my cancer diagnosis.

of the four I experienced before that.

of the ones I hope to have in the future, which isn't a memory so much as a desire that is similar to the desire of every other mother I know, and yet different, as most things are.
Posted by Katy Jacob at 4:45 PM