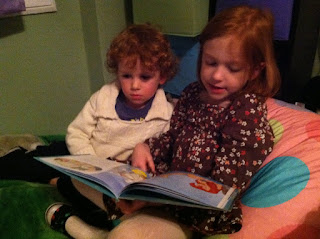 A few days ago, I wrote a post about my strong belief that Gilda's Club should not change its name. I decided not to make that a KatyDidCancer post, because to me, it was broader than that. When Radner spoke of "Delicious Ambiguity," she admitted that she had wanted to continue to believe in "magical thinking," even through her cancer diagnosis, but at some point she just couldn't anymore.

Doesn't that happen to all of us at some point? Of course it does. Part of what makes childhood unique is the strong power of magical thinking. Make-believe games, imaginary friends, playing more with the box than the toy inside it, and the ways that children continuously remake themselves, are all ways that kids learn to navigate the world.

I think this is really important. My kids go or did go to Montessori school for early childhood education, but I don't believe in the Montessori philosophy that says that children should only play "real" games, lest they not be able to tell the difference between fantasy and reality. I don't believe in this because here I am, 37 years old, and I want someone to tell me:

What the hell is the difference between fantasy and reality?

Truth is often stranger than fiction. Take it from me. I've learned that the hard way.

Around this time of year, there are millions of parents who navigate ways to try to keep the idea and the magic of Christmas alive for their kids. We aren't religious here, but we are serious about our Santa. The kids even believe in Santa Mouse--he stuffs the stockings and you have to leave him cheese. Trust me, it's a book--and a classic one, at that.

Augie is three and a half and believes in Santa whole-heartedly. I've wondered about Lenny, though. Last year on Christmas eve, we showed her the Norad tracker online. Santa was in Estonia, on his way to Helsinki. I told Lenny how long the tracker said it would take him to get from the one to the other, and then asked her when Santa should arrive in Chicago. Lenny is a geography nerd. There she was, 5 years old, and she knew all about Estonia and Helsinki. Then, she put her fingers on the computer, did a little calculation in her mind, included the time zone change, and guessed to within 45 minutes of the tracker's estimate.

How can a kid like that believe in Santa? Her logical mind is telling her one thing, but her magical thinking heart was telling her another.

So you know we really screwed up when the tooth fairy skipped over this house on Lenny's third lost tooth. We had to make up a whole story about the weather being the reason she couldn't make it. I know she wanted to believe us. And I know that she didn't, but she played along anyway.

I played along too, most of my childhood. I tried to pray, came to the conclusion I was talking to myself. I listened for hooves on the roof on December 24 for as long as I could, until I fell asleep. I ignored my parents' handwriting on all the notes from various magical beings. I cried when my brother told me there was no Santa, even though I knew that already.

Having children proves to you that there are very few differences between being a child and being an adult. Even children wish they could believe in things that seem impossible. As an adult, you take great joy in the magic. I swear my mom was still playing Santa when I was 20. We tried to keep the magic in the season even when the season proved to be ridiculous, like the last year we had a real Christmas tree, when I was maybe 17 and my brother 20. We bought the tree, they wrapped it in that stuff, put it on the car. My mom drove us back to the house we grew up in, which would sell to another family the next year when my mom moved into a three room apartment, and the whole drive we wondered what that strange chirping sound was. We got home to find a bird had been dying in the wrapping the whole time.

My brother had to vacuum the dead bird out of the tree. The next year, we bought a small fake tree, and that is the tree that stands in my house to this day.

Oh, how life steps in, even when the visions of sugarplums are dancing.

But the mind, or maybe it's the heart, is stronger than reality sometimes. I don't think that changes with adulthood--it just shifts. It is that heart, that mind over matter, that allows us to keep plugging along, laughing, loving, working, while death sits tapping at our shoulders.

Having children just makes this clearer.

Yesterday, Lenny pulled Gabe aside and whispered in his ear. There's really nothing for me to add to this.

Daddy, I want to tell you something. I just realized that I can believe in things that I can't see. Last year, I thought that Santa Claus was just someone in our family who left presents under the tree when everyone else was asleep. But now I realize that's not true.

Because who would want to stay up until midnight?
Posted by Katy Jacob at 7:34 PM