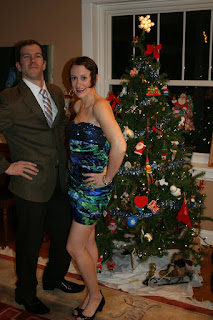 I haven't written in a while, and I definitely did not intend to write today--until I looked at the calendar and realized that today is December 10.

December 10! My day of celebration. My two years post cancer treatment. And it almost slipped my mind, just as it did last year.

I am almost amazed that I can look at this computer screen without passing out. I have been sicker than I've been in years over the last few days, with an illness that seemed to come out of nowhere. Now, I did go to this fancy "ball" on Saturday night in my neighborhood, and I will admit that I had too much to drink--at least for me. That means that I was drinking Jameson's on the rocks, and I had three of them over the five hours we were there. I was also drinking water, and eating, and dancing my ass off, so while I knew I was drunk, it didn't seem that serious. Of course, I don't weigh a whole hell of a lot, so it doesn't take much. Regardless, we had left for the event feeling a little guilty, since both of our kids were sick with high fevers and general lethargy. We had planned to take them to their grandma's house to spend the night, and they were so excited about that, and SO disappointed when we said that couldn't happen. My mom was willing to come out to our house right before bedtime so we could still go to the ball, so on we went.

I was a little out of it when we got home, much to Gabe's amusement and pleasure I'm sure. Somehow, I still felt drunk at 4 in the morning when I awoke to go to the bathroom, which didn't make much sense to me. When I finally emerged from bed at 8 am, I felt like I had the most egregious hangover of all time, rivaling the worst (and first) hangover I had ever had, 10 years ago. That seemed strange, since I hadn't drunk THAT much. I made myself coffee (mistake, I know), had some quiche and some fruit. I felt like death warmed over. I went back to bed, feeling like that "bad mom" who can't tend to her sick kids because she's too much of a party girl.

Then, with a look of genuine concern on his face, Gabe decided to take my temperature. The thermometer read 101, which is about a 4 degree fever for me. I realized that my entire body ached, especially in my hips, deep in my bones. I had chills. When I finally vomited, everything spewed forth like a fire hydrant.

I spent 24 hours not moving from my bed, except to get sick in the bathroom. At one point, it was coming out both ends. Gross, I know.

But also? Not a hangover.

That Jameson didn't help, and God knows it will be a long time until I drink that again. But my kids had the right idea--on Saturday, neither of them ate anything. ANYTHING. They refused every single thing we offered them except one popsicle when my mom showed up. So their little bodies were smarter than mine, which was unlucky enough to be filled with alcohol and mini-cheeseburgers and pasta and UGH just talking about it makes me want to hurl.

Yesterday, I managed to eat about 3 teaspoons of jello and one saltine cracker. I couldn't even stomach ginger ale. I lost almost 3 pounds. I've managed a piece of toast, a little jello, and some Product 19 cereal today.

OK, so damn, Katy, you got sick. Who cares? What does that have to do with cancer?

Well, aside from the fact that even in the midst of a very obvious stomach flu, I sat there wondering why my hips just felt like they were ON FIRE. In the back of my mind, I wondered about cancer. Of course, that's ridiculous. So is having an aggressive form of breast cancer at age 34. So, your mind goes weird places as you sleep for maybe 10 minutes at a time, all in fits and starts.

I was so out of it yesterday that I did NOTHING. I didn't watch tv, nor read. I laid there, awake half the time, staring into space. Now, my body is mad at me for not having moved for the last two days. Gabe seemed to think I was at death's door, because I NEVER do NOTHING. I usually do at least three things at once. He seemed really worried as he kept tending to me and the kids and probably wondering when he was going to get this illness.

It reminded me of the fact that I hadn't vomited since chemo. They told me back then that "people don't really get sick on chemo anymore" because they are freaking LIARS. That $100 per pill Emend was a wonder drug, but because my body rejected all the other potent side effect meds, I got sick all the time. It was a relief to vomit, for that feeling of nausea to subside for even a minute. I was desperate inside that nausea, forcing myself to puke, eating only to survive. I lost 7 pounds in 10 days, and I only weighed 117 to begin with; that's how I learned that my "fighting weight," the weight I need to be to feel human, is 113. So at 115 this morning, I knew I needed to get something in my stomach.

I remember not so long ago, Gabe consoling me in the bathroom, patting my bald head. I remember him kissing me less, and I thought it was because he was no longer attracted to me, but it turned out to be because he was so afraid he would pass germs on to me and than I would die from weakened immunity that he was scared to be intimate with me. I remember not sleeping at all for five nights, losing the ability to sweat and to cry, the menopause, all of the crazy shit that happened.

And I remember that I just kept doing everything the same, to the extent that I could. I worked, I went out socially, I still had a sex life and I still mothered my kids and I lived a relatively normal life within all that shitty shitty sickness.

So what's changed? I get the flu for 36 hours and I just throw in the towel? I mean, I didn't even SEE my kids yesterday. I didn't consider going into work today, though I have a lot going on that needs to get done. I laughed when Gabe asked if he should sleep in our bed or downstairs. I have had so much worse, for such longer periods of time, so what gives?

I think that we react differently to things when we know they are temporary. I knew this was a flu, and even though it doesn't help to think about the proverbial "24 hour" nature of these things when you're terrified to stand up because you know that will make you sick again, you just figure you can wait it out. When you know that you will feel like shit for at least four months and that maybe, at the end of the day, that's as good as it will get, that worse things might await you, you stubbornly cling to your life the way you used to live it.

I was in cancer treatment for 8 months. I fast-tracked myself, gave myself little to no time between stages of treatment, so that I could be done by Christmas in 2010. The side effects lingered; I had horrible hot flashes and other menopause side effects for three more months. So, I dealt with feeling like shit from cancer for a little less than a year.

And it's been two years, to the day, since I finished with that. I still have side effects, especially from surgery, and I'm dealing with this annoying second puberty, but in general I feel pretty damn great.

These two years have given me the normalcy that other people have--the ability to get sick and just be pathetic, even if I still have those thoughts that question every illness, those moments when I wonder if each ache or pain is cancer returning. Cancer related sickness was something to fight, not give into, something to work through because I just didn't know how it would be after treatment, or if there would be an "after treatment" for me. For so many women, that time never comes.

Two years ago today, I had my last radiation treatment and, hopefully, finished my cancer treatment for good. I wrote a post that day about all that I had gone through that is still painful for me to read. I look like such a cancer girl in the pictures in that post, and yet there's something else there too, some essential side of myself, the part that had stopped caring about eyebrows, the whole "attitude" that people told me I possessed back then, which I really couldn't see in myself.

I have had a two year reprieve, a gift, really, something that might just be temporary, though we can sure as hell hope not. I have had more time since cancer than I had in it. And that time has allowed me to get sick like a NORMAL person, one who doesn't have to just keep plugging through the mess. I am very, very grateful for these two years. I am also very, very cognizant of the strength it takes to be in cancer treatment forever, as so many people are forced to do.

If I felt healthier, I would celebrate this day, but instead I will end with three thoughts. One is a solemn vow to pretty much never eat quiche again. The next is something that happened Saturday night at the party, a small thing, really. I was talking to a woman who knew me from Montessori and introduced me to her husband as "Lenny's mom," probably because she had momentarily forgotten my name. He looked absolutely shocked to see me. He touched my shoulder and said "Wow! I didn't even recognize you." All I could do was laugh, especially because as I danced the night away with my rhythm-impaired husband, tipsy and happy, I could really barely recognize myself. 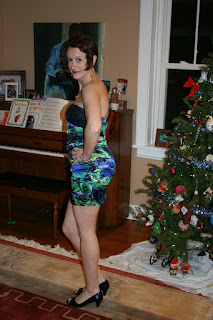 And finally--this. This passage, written two years ago, when I was so much myself, but not enough time had passed for me to see it. Here's to more sets of two years!

I am not going to be one of those people who says that cancer gave me a gift, and I am not going to smile about the hope and inspiration it brought into my life. Maybe I should, but that’s not me, and those words seem pretty hollow, so if people wanted to hear that I assume they stopped reading this months ago. I will say that the one thing cancer did for me was give me a reason to write about something other than economic development, payments, or predatory financial scams. It’s not that this trip was worth it. It was total crap, actually, and the trip hasn’t ended, won’t for years, assuming I have years. But remember the scene in Field of Dreams when James Earl Jones goes into the cornfield? Why does he get to go? Well, maybe it wasn’t a privilege, but he went so he could write about it, and tell other people what it was like. I don’t think for one second that I’m as cool as James Earl Jones, or that I have some great wisdom to impart, or that I have some kind of absurd cancer calling, but someone or something pushed me into the cornfield, and in order to get through the maze, I have needed to write my way out.
Posted by Katy Jacob at 3:57 PM