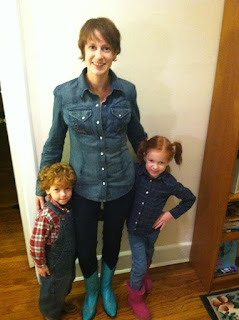 There's this pervasive rhetoric out there that cancer makes you some kind of uber-parent. After cancer, you are apparently supposed to be infused with a Zen-like understanding of the universe that enables you to calmly and rationally deal with any parental situation put before you. You are supposed to change dramatically, and yet not allow it to be OBVIOUS that you have changed, or why. So you aren't supposed to bring up the Big C at the same time that your life is supposed to be changed for the better because of it.

That's a bunch of crap.

I've said it before--I'm an impatient person. It's entirely possible that cancer has made me less patient, not more, but we will never know, will we? Because this is the only Katy that there is. I started thinking about how we might have some slightly altered conversations at my house the other day, when I got pissed at Gabe for forgetting to feed the kids any lunch on Thanksgiving. I was cooking for two days, and then I went for a walk, hoping they would have had a snack by the time I got back. I even reminded him about it before I left. But no, they were all too busy playing outside. I know I should have been basking in the post-cancer bliss of appreciation for the beautiful weather, but instead, I was annoyed by how hungry they were just an hour before Thanksgiving dinner. So I said this:

I have been cooking for two days. You are NOT eating right now. You will just have to be hungry until dinner. OK, fine, you can have a banana--but that's IT. Your DAD was supposed to REMEMBER to feed you. (Turns to guilty party). Jesus Christ honey, how can you forget to feed your own children? I mean, WHAT WOULD YOU DO IF I WAS DEAD?!

After the look Gabe gave me for that one, I thought it would be worth sharing some other gems as an addendum to the first installment of this, written almost a year ago:

What do you MEAN you don't like this dinner? Do you understand that this food is absolutely DELICIOUS (shoveling food into mouth, so glad to be able to taste it and keep it down)? It isn't a requirement that food taste good you know! YOU STILL HAVE TO EAT IT! 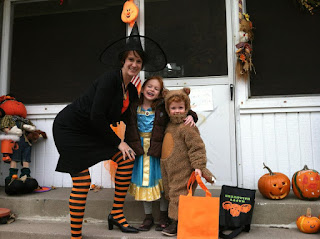 So, do you think I should wear my hair for Halloween, like as part of my costume? No? Well what should we do with it? Do you want to play with it? No? How about one of the other wigs then? The normal ones or the green one or the purple one? Maybe one of your dolls could wear them.

You're awake because you're having nightmares about a dog getting bitten by tics? Well, you know, that's not so bad. I'm sure the dog will live. We all need to sleep now.

You injured yourself? Are you bleeding? I'm sure you'll live.

So you have injured yourself and it's just bleeding a little? OK let me get a bandaid. You'll live. Tell your dad if it gets worse, because I'm going to the gym. 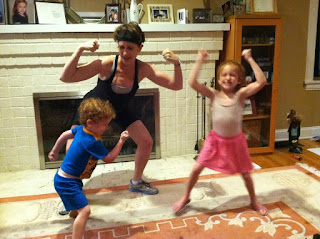 Lenny, have you lost weight? You don't have any weight to lose! Take it from me! You will feel weaker, not better, if you get smaller. Here's some butter to eat and also some two pound weights. Start lifting!

No, I don't remember when the dinosaurs died. None of us remembers that. No, we were not zero, we were nothing. Humans didn't exist. Do you want some raisins?

Yes, your dad and I are going out two nights in a row. We still like each other and life's short.

No honey, I don't really remember when you first learned to walk.

I'm going to the doctor. Jeez, kiddo, it's only a checkup. DON'T WORRY ABOUT IT!

Yes, Daddy is having surgery. What's the big deal? Lots of people have surgery. Why do you need to know why? Wait, why are you crying? Oh shit it's just surgery so we can't have any more kids! There's nothing wrong with him! Why is he doing the surgery and not me? Well, I've done enough.

Look whatever your name is, you had better listen to me!

Lenny, if you don't take care of your hair, we are cutting it super short. These tangles are ridiculous. Augie, you will just have to put up with people raving about your curls all the time. You both know something they don't know: IT'S JUST HAIR.

Don't fake cough at me. Pretending to be sick isn't funny.

So I see that your favorite stuffed animal right now is a demon with a pitchfork. What's his name? Little devil? Cute. 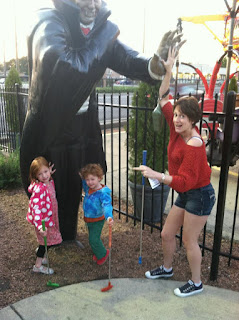 I know it's a school night, but we are going to go to dinner and go mini-golfing, because tomorrow is my birthday and I'm really happy to turn 37. You won't get enough sleep but I don't really see how that's relevant in the grand scheme of things.

Yes, I see that your brother has grabbed onto your leg and won't let go, and you look pretty annoyed about it. Go ahead, hit him a little. You told him to stop at least five times, and you're pretty strong. Use it while you've got it.

Are you really going to keep using that pacifier? You know what, fine. I'm not going to stop you.

Yes, everyone dies. Hopefully not any of us anytime soon.

And then there are all the silences, the times when I don't say anything, because my kids ask me about what they will be when they grow up or where they will live or they talk about getting married, not even really knowing what that means, and I just slightly turn away. Still wondering whether I'll get to see any of that. Still a sucker for Augie's go-to strategy for getting out of trouble, even when he breaks a vase that held branches of the pussy willow tree from my dead grandmother's garden and it came down to me to discipline him. He sobbed, asking, "Is it going to be all right?" And I said No, the vase won't be all right. It's broken forever and you need to apologize and listen when we tell you not to do things, like throw stuff in the house. You might need to use some money in your piggy bank to help replace it.

And then he looked at me with those big brown eyes, asked, "kiss?" and grabbed me by the back of the neck and swooped in like he always does, something I'm sure he learned in one of his past lives, and because he believes that this fixes anything and I don't really believe I'm in a position to argue, I responded: And yeah, in general? It's going to be all right.. 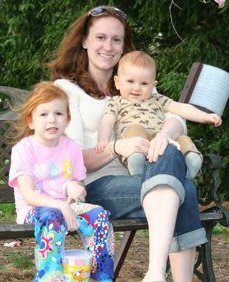 This photo was taken 10 days before my cancer diagnosis.