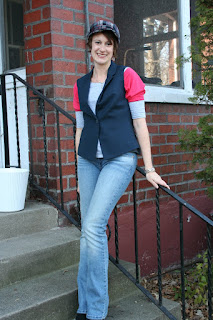 This is the third year that I have felt the peculiar pressure to try to prove to the world that I am thankful for being here, to make it clear that I feel grateful for every breath in a way that others do not. It is an odd bit of cancer-related malaise, this assumption that I of all people must be happy to be here in the world.

It is odd, because it is false.

It is not false because I am not happy, or thankful, or relieved. I wrote what I needed to write about how it feels to contemplate Thanksgiving post-cancer last year, and someone once said that what was once written well need not be written again. No, it is false because it is ridiculous to assume that I, and others who are experiencing or coming out of difficult times, didn't feel gratitude before my suffering commenced.

I am bothered by our focus on thanks at Thanksgiving. It reminds me of our focus on "tolerance" when we are reminded to contemplate the "other." Each carries within it an expectation of privilege, a collective hand across the brow that says "whew! glad I'm not that other guy!" After all, we are encouraged to give thanks for our plenty, as if it would be appalling not to have it. We are encouraged to remember others who are less fortunate, as if they are somehow separate from us. This is not so different from being told to tolerate the existence of other people in the world, as if the reminder that not everyone's life looks like ours is simply a bothersome inconvenience.

Our culture is obsessed with the idea that we can all lead "purposeful" lives, doing what we want, bestowing our gifts on the world. If a person is adept at something, such as writing, she is told that she has a gift that she is obligated to share. She might disagree, not because she wants to keep this skill to herself, but because she is not at all convinced that her place in the world is important per se. She is fairly convinced that no great chasm will exist in the universe when her time is up, and she does not believe that we were placed here on earth to be our fullest selves. In fact, she is not religious, and does not believe that we were placed here at all, or that any one of us has a specific destiny to fulfill.

So what is the purpose of all of this, in this context? How should we place our relative plenty in the face of so much nothingness?

Perhaps we could start by recognizing the illusion of choice. We live in a society that believes in its own myths, one that puts forth the idea that life is but a series of choices that are open and equal to all people, and we only have to have the moxie and strength and determination to make the right ones. But that is an assumption so steeped in privilege that it doesn't even recognize itself as privilege.

When a person feels she does not have a lot of choices, that does not mean that she is weak, or not trying hard enough, or that she has a deficient personality. Choice is relative. A lumpectomy is not a preferred choice over a mastectomy, for example; one wishes only for the choice of going home, never having had cancer at all. One is not truly "choosing" one form of toxic chemotherapy over another. And if a woman finds herself in a situation where she is not particularly "fulfilled," such as in a job that has lost its luster, that is not because she is making a cowardly choice. It is, perhaps, because she recognizes that life isn't always about fulfillment of desire, but rather fulfillment of responsibility. She can see the people who have lost the ability to choose how to spend their days due to their experience with illness or discrimination or plain bad luck, and she can realize that sometimes, life is what you have ended up with, not what you had planned.

If we can choose, we should realize why we are in a position to do that. Our choices and the things we have to be thankful for are but an accident of history; they can change or be taken away at any time. This makes me think about how I used to argue with some of the truly dedicated students studying urban planning with me in graduate school, who were convinced that things such as big box retailers and strip malls were destroying the fabric of our lives. As they made erudite arguments about why local, mom and pop stores should be encouraged in lower income areas, I would ask this:

Why do poor people always have to choose between having something that is less and having nothing?

In middle class communities, folks do not have to choose between going to a discount pharmacy such as Walgreens to pick up their medications and going to an expensive, quirky store managed by local residents that throws itself back to the 1950s with more than a hint of ironic nostalgia. Rich people do not have to go to community meetings and public hearings in order to have the option not to purchase milk for their children at a high markup in a liquor store. When there are real choices, we can demand the best. That does not mean that others shouldn't be able to demand at least something.

While some people sit high on the mountain discussing the rain, people in the valley already know that it is flooding.

What the people on the mountain don't necessarily understand is that they will, inevitably, live in the valley one day themselves. That is true for all of us, whether we admit it or not. It is what we do with our knowledge of this that provides the possibility for moments of real grace.

This year, during our annual time of Thanksgiving, my husband made this remark to me: We can't all be so lucky, Kate. Not everyone has found that fountain of youth, as you have. I laughed and said that half of the fountain of youth is good DNA. Silently, I told myself this: The other half lies in knowing that you will die.

That is this year. Last year, in my Thanksgiving post, I said this: Maybe we all should be thankful to have suffered, and survived.

That's the only absolute truth that I really understand. It is through suffering that we learn empathy, that we come closer to the collective understanding of God, that we can be grateful for the shoes we walk in every day. So I would say that we were not put on this earth to fulfill ourselves, but rather to make improvements. We can only recognize what needs to be changed if we have suffered and lost ourselves.

And so, this year, I will not focus on being thankful. I will, rather, be mindful. Mindful of all that I have, of all that I have lost, of the opportunities and challenges that await me, and, most importantly, of the extreme specificity of living in this body, in this time and place, at this point in history, and of what that means for how my life is lived as opposed to how others experience the world.

All of these deeper thoughts bring me, at last, to this: Today, while I was searching for all of my Thanksgiving recipes, I came across a poem that I had written about 10 years ago. Amongst all of the coupons, recipes, menus and random pieces of paper in a timeworn binder, sat this poem that is about, of all things, a radio station I listened to as a teenager that advertised itself as "all rap, all the time." You could only hear this station if you happened to be in certain areas--blocks, really--on the west side of Chicago. This might seem strange to you, but it is a fitting ending to me:

In that lone car on a straight stretch
of broken Midwestern pavement
so that ten years later
I could recover
the blip in time that cemented us
into that insignificant moment
and I could say to you,
Here, we were here,
it was real,
remember?
Posted by Katy Jacob at 4:19 PM