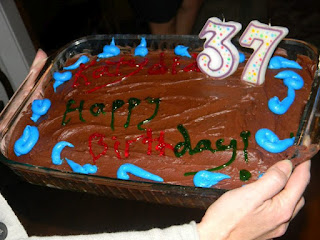 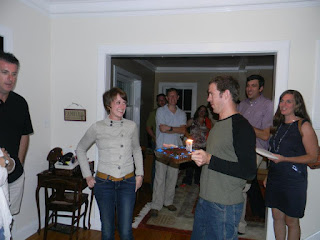 Why do we celebrate birthdays? I mean, don’t get me wrong. I believe that I am entitled to a birthday celebration that is at least a few weeks long—especially now. I throw myself parties and bake myself cakes and take time off of work and guide my husband towards gifts that I actually would like and go out to dinner and minigolf with my kids on a school night and raise a glass and initiate birthday sex and in general just breathe a huge sigh of relief and take a quick look over my shoulder, on every August 22.

But really, what’s the birthday celebration all about? It seems like we should be congratulating our mothers on the anniversaries of our births. What did we do, after all? We were just BORN. It’s not like that’s an achievement.

Except, maybe, it is. Sometimes you have to fight to be born. And maybe, just maybe, you show yourself, your true colors, from the start. The story of the long labor that led to my birth is legendary, especially because my dad told the nurse he thought I was trying to wiggle off of the hospital scale. He was told that was impossible, because newborn babies really can’t move. And then, the nurse looked over, and said, Jesus, that kid is squirming to get off the scale.

You know, just trying to get the hell out of dodge. Always looking for an exit—that’s me.

Lenny was not interested in the whole thing—I had to push her for two and a half hours. The heart monitor fell off inside my body, AFTER her heart rate plummeted precariously following the epidural. When she was born, her head was cone-shaped and beat up from the fight. She didn’t cry. Gabe wondered if she was even alive. She didn’t feel like eating, she had trouble hearing out of one ear, she had jaundice. And yet, people in the hospital came to see her—nurses, other doctors I had never even met-- and marvel at how pretty she was. Through it all, she just sat there—looking, always looking, waiting to see what would happen next.

Augie couldn’t wait to get the party started. He came three weeks early, spared me the 8.5 pounds my bum hips probably couldn’t withstand, and was completely healthy at just under 7 pounds, wailing and eating and looking pissed off right away. After nursing furiously every few minutes for hours after birth, he fell asleep for two entire days. Within weeks he was laughing in his sleep.

So maybe that’s what we celebrate—the fight, and the way we experienced it, and the fact that we’ve had the opportunity to do it again, for one more year. The initial fight is one that we will never remember, that lives on only through stories told to us by people who were there. And that story begins the story of our lives, the lives that so many have to fight for every single day.

I wrote a pretty damn good blog for my birthday last year, if I do say so myself. I summed it up near the end, saying, “I think about getting old, and I still hope I get to do it.”

And that’s the truth. I don’t think about getting middle-aged, or worry over my lost youth. It helps, I suppose, that I still get carded sometimes, and that kids 15 years younger than me whom I see as potential babysitters assume I am around their age until they find out the truth and then they say things like “wow you look GREAT,” (for your age you freaking dinosaur lady, I mean my god when I’m that old I will be this short of THE GRAVE.”)

I suppose it helps, but really, I want to be 37. I definitely feel 37. I’ve felt like an old lady since I was a child. I don’t mean that in a negative way. But life, and the experience that came with it, was always very much with me. I tell my kids that all the time—this age? This specific number of years? I’m proud of it. Lord knows, I’ve earned it.

The kids see things differently, of course. They want to be older—right now. Augie figured out when he was 2 that it would be 19 years until he was allowed to drink a beer, so at age three he has switched that question around: “Mommy, how old do I have to be to drink wine?” Lenny always wants to guarantee that she will be three years older than her brother NO MATTER WHAT. She asks how old I was when I got married (never when I met her dad, because, in her mind, we have always been married, waiting around for her and her brother to miraculously be born), what year it was when I learned to drive or left for college. Those questions are on her easy days. Other days, it’s “mom, is there anyone in our family who was alive 90 years ago?” “No one lives to be 200, right?” “When the universe began…”

CHRIST LENNY, ENOUGH! Can’t you just ask me about the legal drinking age like your brother?

Augie wants to know WHEN his best friend is moving back to Chicago—not IF. He asks when he will go to Lenny’s new school, how many years it will take to get there. The answer could possibly be never, since getting into the public school that Lenny will attend in the fall is as notoriously difficult and absurd a process as anything Kafka dreampt up.

In a way, Lenny understands already, and Augie’s starting to as well. 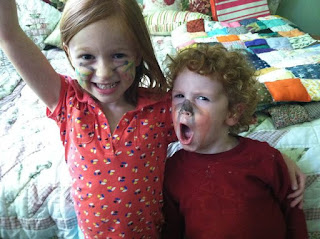 Time—what a concept. Time keeps moving, but at some point, you stop moving. What a thing to wrap your mind around. To them, time is about experience—the things you get to do, the places you hang your hat. To me, it’s about memory.

How old was I when I started drinking coffee? I don’t remember—probably 15? One day my mom was making coffee for herself and maybe I asked for some, and it was just the two of us living in the house at that point, so she didn’t flinch, or she offered me a mug, or somehow we just found ourselves silently reading the paper and drinking coffee like that’s what we had always done.

What do you mean, there used to be two Germanys? Well, see, there was this wall…we talk about it as if it “fell” when I was 14, but of course that’s not really true, and that physical wall was all tied up with this political concept it is hard for you to understand and this other country that no longer exists. I remember being assigned the role of the Soviet Union in a debate in 6th grade, wherein I was forced to defend my nuclear strategy, and then right around my 16th birthday I was cuddling with my boyfriend at his parents’ house on the couch in the basement and we were watching this whole scene involving an attempted coup, and we looked at each other and actually said, in spite of our youth, we are watching history unfold on the television right now, and within months there was no more Soviet Union, and no matter how much geography you know right now, you really have no idea what I’m talking about, do you honey?

Or, time sneaks up on us when we least expect it to or want it to, and when we are out at the karaoke bar for a fun celebration for a friend’s birthday, right after we celebrated my birthday with a big party at our house that I baked ten different desserts for, suddenly your father disappears. Time is so relative that it takes me a while to realize he has gone. Finally I text him and he tells me that he is out in the car. Excuse me? What the hell are you doing? Well Kate I really wanted to sing a romantic song to you for your birthday but then I just started thinking about the last time I did that at this bar, two years ago when you were bald and in the middle of chemo and everything came rushing back at me and I knew I was going to lose it so I went outside. And at that time and in that moment I knew I should sympathize but I didn’t. I told him fine but you’d better get your ass back in here soon, and when he wasn’t back in a few minutes, I sent him a text that summed up my feelings on the matter and prompted him to scurry back into the bar:

And it was, in a way, but of course, in another way, it wasn’t. His time wasn’t up yet. Neither is mine. I’ve just had to fight a little bit more for the time I’ve had. So here’s to the fact that Katydid 37, when she wasn’t sure if she would do 35. When I hear another woman my age lament the closeness of 40, I think, girl, I’m TRYING for 40. In 2015, I hope to be able to mark 5 years NED, 30 years of being able to walk again, 9+ years of watching my heart walk around outside of my body, 23 years of wondering if my brain’s electrical impulses would cooperate without help, 40 years of the stubborn, difficult, eye-rolling, trash-talking, fight.

I’m trying for it, for more of this concept called time, because I don’t know any more than anyone else when my time will be up. The jury’s still out on that. The jury’s settled though, on one other matter:

Clocks and calendars keep some of our time, but our stories keep the rest. 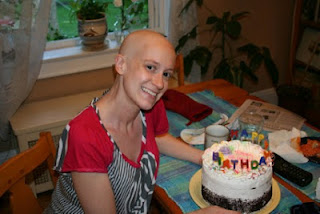 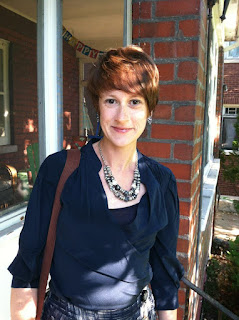 Thanks to Tracey Medrano Becker for taking the first two pics in this blog at my awesome birthday party.
Posted by Katy Jacob at 7:39 AM