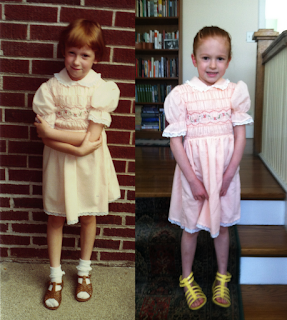 I had just all but decided that I was done with this blog when I discovered this picture my mom had given me around Easter this year, after she saw Lenny wearing a dress I wore 30 years ago on my 7th birthday.

That picture! That's it. I want to write about that.

I suppose the KatydidCancer blog doesn't need to be about cancer all the time anymore. Especially since it has never really been about that, not entirely. It's been about so many things, the body primarily, the way we interact with and make peace with our bodies. It's been about motherhood and gender and marriage and writing and sex and death and all of those things they used to tell us were "universal truths" when we were in school.

And today, it's going to be about a picture. Or, rather, two of them.

Look at me. Look at those eyes, that smirk, that boyish stance trying to make peace with the frilly dress. Look at how I was so much myself back then, in August of 1982, when I turned 7. Nothing in me has changed. I can see that now. Nothing.

And then, look at her. Look at my daughter, wearing my dress, one of the ones my grandfather picked out for me because he had two boys and always wanted to pick out clothes for a little girl. Lenny in that dress is some kind of dream literally 60 years in the making. And there she is, so very Lenny, as she always will be. Those feet, turned in, that half-self-conscious rumpling of the dress, the bruises on the shins...that face.

Thirty years, from one to the other. I passed on my red hair, my big brown eyes, my long legs, and a peach-colored smocked dress. And I taught other things as well. Those 30 years collapse easily when I see my daughter get lost in a book the way I used to do, when I hear her making up stories, creating her own little world in her room by herself. She got some things from me, it's true. That exasperated tone of voice, that impatience, that nerdiness. She prefers the company of one or two great friends over a crowd. She loves shoes. She likes to jump rope, she never sits still except to read or draw, she has little time for television. She talks to herself. Gabe has told me that he envies that in me, my ability to talk to myself, and he wonders what I'm saying. He has told me that he has no internal dialogue. While I have to wonder how two such vastly different people ever got together, I could honestly tell him that I don't either.

What I have is a virtual internal tower of Babel.

There are so many other things that Lenny is that I am not, that she enjoys that I do not. She is dolls, and gymnastics, and geography and arts and crafts. I am bugs and basketball and geometry and poetry. We are different, but the same, me in my tank top, bike shorts and sneakers after spinning, she in her leotard, skirt and sandals after gymnastics, both flexing, both laughing, two goofs in a wide open messy living room. 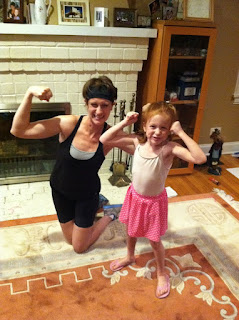 I see myself in that dress, and I can see myself over the course of 37 years, in a way that begins to make sense. The phase I went through from age 5-7 where I wore dresses and patent leather shoes all the time led easily into a tomboy phase from age 8-12 so severe that at one point I wanted to give myself a boy's name, to hide the girly aspects of myself that were starting to become apparent. And then, I ended up somewhere in between. I can see that in Lenny too, that interest in trying on different aspects of herself. I can see that she isn't yet convinced that there's someone she's supposed to be, that she is going to spend years trying to figure it out, and yet...

She's been right there, all the time, looking into the camera, just so Lenny.

When Lenny was two and a half, I wrote her a poem. I wrote it after giving her and the boy next door, who was not yet two, a popsicle. Those kids acted as if receiving that popsicle was the single greatest thing that had ever happened to them. So I wrote this for her. Gabe printed it out and framed it, and the poem has sat on her dresser ever since, usually covered by toys and socks and hair ribbons and books. A few weeks ago, it fell, and she thought it had broken. I didn't think she even remembered that the poem was there, but oh, how she cried, to think it had broken. The frame was fine, and I told her, Lenny, we could always buy another frame. Even if it broke, I could always print the poem out again.

But, I suppose, that wasn't quite the point.

There are two things that I think about that poem. One is that it is the most practical thing I have ever written, this simple poem that my two year old daughter could understand. The other is that, at the end of the day, it is possible to know everything that you could ever need to know about a person by how she would answer that question.

The last time I handed a popsicle to Lenny, a week or so ago, I heard her--my daughter, the child who never seemed to be listening when I read that poem to her-- mumbling to herself: Because they're cold? Because they're sweet? Because it's summer?

And I wondered to myself, what is your answer? Because I, I am grown. I am no one if not myself. I am Because of the front steps. And your father, I know him well enough to know that he is Because of fireflies.

So it goes, that 30 years after they were born, the front steps and firelies got together and had you, Because you get to choose, and three years later, your brother, because of the jokes.

How I hope that when you are grown, and you hand a popsicle to a child, be it your child or someone else's, that I am there to see it, and that you could tell me, after you have had enough time to be sure, whether or not I was right.

And I suppose I should ask the same question of a different you. So, dear reader, which are you?