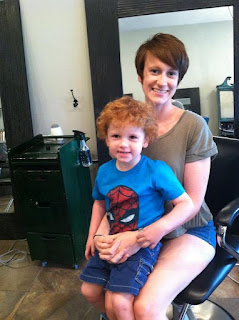 I've been going through my son's clothes, getting ready for the changing season. Realizing that he can wear the same size in shirts that his sister, who is more than three years older, can wear in pants. Acknowledging that I will never change another diaper, at least for my own child. Ignoring the fact that when he dresses himself, if I can get him to do that, his pants are always on backwards. Accepting that he will run around the house naked, yelling things like "uh oh where is my penis?! haha!"

Admitting that my baby is no longer a baby.

A boy who still sleeps with his pacifier.

In fact, he has four of them. I thought we were down to two, but somehow two more turned up. He never uses them except at bedtime, when he puts one in his mouth and then holds the other three, like small versions of lovies. He sometimes rubs the silicone against his face.

And he still calls them "mamas."

He knows that they are not usually called mamas, and that the technical name is pacifier, and that other people call them binky or pac or nuk. But for more than two years, we have called them mamas.

Like many children, one of his first words, before his first birthday, was mama. Augie, like many boys, spoke coherently much later than his sister. Out of guilt, I had him evaluated when he was 17 months old and I was at the tail end of chemo. He showed a speech delay, albeit minor. The child never stops talking now, so I guess I was too quick to worry. But I digress. Around the time he was uttering his first tentative words, I found out I had breast cancer. He was weaned within six days. The week before my diagnosis, I couldn't nurse him on the left side for about 24 hours because of the pain from the 7 core needle biopsies and because the milk was filled with blood, evidenced by the pink substance that looked like a strawberry shake that came out when I pumped on that side. After the biopsy, he was confused, but accepting, of his relegation to the right side.

After my diagnosis, when suddenly, just like that, he never nursed again, he was hurt.

I know that now. I can tell myself what I told myself then, that he was confused, that he had only ever had a bottle when he woke up in the morning once in his life, so he didn't understand why his dad was walking into the room instead of me. I can say that it was the change in routine, the comfort he got from those five times a day that he calmed down with me, that made him angry.

I could tell myself that he was a baby, and that babies feel things differently than adults, but it would be a lie.

I saw his face on those mornings, and it was the look you get from a man who knows you are leaving him forever, the look you receive from a friend when you say goodbye knowing you will never write. He looked old, somehow worn down by the understanding. He was hurt that I left him like that without explaining.

He started calling his pacifier "mama."

He started calling me "mommy."

Just in case I didn't understand that there was a difference.

Now, when he gets in trouble, as he so often does through his outlandish but still entertaining behavior, one of the only things that works is to threaten to take his mamas away. The other day he was left with only one. Last night, though he was well behaved, I tried to reason with him that other three year olds don't use mamas, he never uses it at school for naps, why doesn't he just try to hold them instead of putting one in his mouth? I told him that he will go to his first dentist's appointment soon, and that his mamas weren't good for his teeth. I told him that babies use mamas because they get used to breastfeeding or drinking from a bottle and it soothes them but big boys don't usually need them.

He pouted and grouched, gave me his angry face, and walked away. A little while later I brought it up again. He looked at me with that old expression that I remember so well and asked me: "Why do I have to stop putting my mamas in my mouth?"

And I didn't know what to say.

So I found the fourth mama under his bed, read him two stories, sang to him, gave him a kiss and told him that I loved him.

And when it comes time to really make him give up his mamas, I'm going to make my husband do it. And I am going to keep however many are left of them, perhaps in the drawer of the nightstand by my bed, only taking them out on one final occasion: when he leaves our house for college or work or whatever he's destined to do when he's 18.

If I live long enough, I'll take them out one last time, and then I'll throw them away. 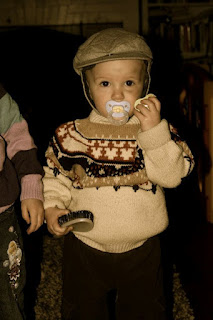