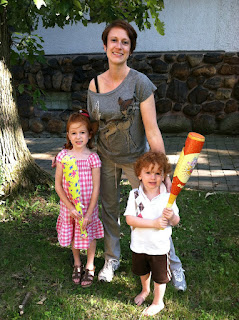 Breast cancer is pretty damn common. Too common, really. Everyone knows someone with breast cancer. Every woman fears mammograms, fears finding a lump. Young women with breast cancer can feel very ostracized even inside the so-called “breast cancer community,” which isn’t a real THING of course but more of a kind of absurd concept. Women our moms’ age with breast cancer feel sorry for us; doctors do awkward stuff like cry when they see pictures of our kids; we have fertility issues and different career challenges due to our stage in life; people, including other survivors, can become disturbingly obsessed with what cancer has done to our looks. So it’s weird, being in this 2% of women with breast cancer who are under 35 at diagnosis.

It’s even weirder to be triple negative.

Now, I’m not going to claim that being the poor redheaded stepchild (in my case, maybe literally) of breast cancer is harder than being one of the truly marginalized—the metastatic survivors. That is a whole other level of difficult and a whole other level of bullshit. So let’s leave that aside for now. But, as hard as it is to have breast cancer at such a young age, it’s harder to have something that isn’t well understood. It’s tiring being in the 15-25% (even that wide range shows you that the medical community is unsure about what triple negative really is) of breast cancer patients with a “rare,” “aggressive,” “insidious,” “deadly,” or whatever adjective is du jour, cancer type.

I get tired of having to explain. One of the many reasons that I get so annoyed by breast cancer “awareness” is that the focus on that idea has led people who are clueless about breast cancer to think they know what they’re talking about, leading them to question someone like me who might actually know more about the subject, HAVING HAD IT MYSELF. I know what the media portrays about breast cancer, but why do I always have to set the record straight? Yes, I can eat tofu. Yes, I get regular periods, and I could get pregnant, though that would be a huge mistake and potentially disastrous for my health. No, I don’t take any medications. There is nothing for me to take. The fact that I was stage one does not mean that I beat the disease. The fact that I was stage one definitely does not mean I shouldn’t have had to do chemo. No, those risk factors don’t apply to me. Yes I will scream from the rooftops that I believe birth control pills played a huge role.

The thing that precipitated this blog is an article that I read that provides some rare and promising news about future treatment of early stage, triple negative breast cancers. It's too late for me to try this, so I am left to wonder if I would have volunteered to take these drugs if they had been offered to me, not knowing if they would help, and knowing they would probably have averse consequences on my strange metabolism that hates drugs. Even though it won't help me, I do take comfort in knowing that they are making strides in helping future generations of TNBC survivors. I do NOT find comfort in the article reminding me that I had “an especially deadly form of the disease.”

In a way, I’m glad that I went to a large, sterile, relatively anonymous research hospital for my treatment. There were times when it frustrated me, but there were also advantages to the fact that the doctors I was assigned to had seen just about everything that breast cancer could throw at them. Lactating women with cancer? Extremely rare, but they’d seen it. Multiple tumors of different grades? Done that before, no problem. Triple negative and BRCA negative at age 34? Hmm, interesting, but doable. No one ever focused much on “triple negative” with me. Yes, it meant I could in no way avoid chemo and it dictated the type of chemo I would have to do, but they focused on my stage and response to treatment. I realize now that my being triple negative was at the top of my doctors’ minds, but they chose not to dwell on it. My monotone, unsmiling oncologist would acknowledge it sometimes, saying things like “well, it’s true that there are no maintenance medications for you. But maybe that’s a good thing in your case—you won’t have to take more medicine that you might react badly to in the future.”

Here’s what I still find frustrating. WHY is triple negative breast cancer more aggressive and deadly? Or more precisely, HOW is it thus? What I mean to ask is this: is it aggressive in the sense that even my stage one cancer is more likely to come back, regardless of the fact that it didn’t spread to my lymph nodes? Is it aggressive in the sense that it finds local recurrence passé and would always choose to metastasize to a distant area of the body, bypassing the lymph system entirely, and going straight to the soft tissues? Or is it aggressive in the sense that it grows quickly? Or in the sense that it is often found at later stages (because younger women who are unlikely to receive diagnostic testing are more likely to have it)? I think, unfortunately, that the answer is all of the above. And that sucks, because being stage one really should count for something. But I can tell you that mine was fast growing. I’m sorry, but that tumor became palpable OUT OF NOWHERE. Oh wait I’m sorry, I meant to say TUMORS. I was in a rare population of women who manipulate their breasts all day—nursing women. I would grab my boobs, contort them, massage them, you name it, to help my crazy, kicky baby boy eat. Maybe he was crazy and kicky because I had milk supply problems due to cancer. Or, maybe he’s just Augie. But the point is, I nursed five to ten times a day for almost a year and never felt it. And then BAM. Hello, cancer. I am not alone in experiencing this—other triple negative survivors have told me that they could almost watch their tumors grow.

So thank God I just stoically accepted my fate and told them to do the core needle biopsy on the same day as my first breast ultrasound, which turned into something else entirely. Because if I had waited, the tumors could have gotten bigger very fast. As it was, it’s amazing that I was stage one with three tumors—though all together they were more than 3cm in diameter, taken separately they were 1.6, 1.1, and 0.6 cm, and breast cancer staging is a like a consecutive prison sentence rather than a cumulative one, if that makes sense. So I got to be stage one. But does that even mean anything with TNBC? Who knows.

Because triple negative breast cancer is a fallacy.

After all, I am a redhead, not a non-blonde. My hair has a name, and it has extra copper in it, and it is caused by a genetic mutation.

So it is with triple negative breast cancer, in a way. But no one knows the real name yet, or what is in it, or what causes it.

Just think—not twenty years ago, breast cancers were all treated the same. Now, we know that there are at least eight types of breast cancer:

Estrogen + (the overwhelmingly most common).

HER2+ (possibly more aggressive than TNBC but has known effective treatment)

Her2+, Estrogen +, and Progesterone + (also known as “triple positive”)

Estrogen-, Progesterone-, and HER2- (also known as triple negative)

Add on to that BRCA status and you have more iterations and types of treatment.

Triple negative is just another term for “your guess is as good as mine.”

I have theories. One is that I think they should check breast cancers for testosterone receptivity. I wonder if some of us who are triple negative have a slightly elevated level of testosterone that somehow alters our breast cells. Maybe that accounts for my high sex drive, my temper, my inability to sit still, my naturally muscular arms. I have another theory that there is a subset of TNBC that involves young women who were on the pill for many years starting at a young age who subsequently got pregnant very soon after, then spent years either pregnant or nursing. (Here's an interesting tidbit in wikipedia: in one TNBC study, women under 40 who took the pill for more than a year were more than 4 times as likely as women who hadn't taken the pill to get TNBC). You think I’m crazy? That my science is so off the wall that it doesn’t even qualify as “junk?” Well, again, my guess is as good as any at this point. The bottom line is that there are likely several types of cancer underlying TNBC status today, and some are probably more aggressive than others.

Surely, over the years, there have been many women with triple negative breast cancer who survived many years. But at the time of diagnosis they weren’t aware that they were facing something more insidious, aggressive, deadly, yadda yadda yadda. Maybe their spirits weren’t crushed the way some TNBC survivors’ have been. Other breast cancer survivors say unknowingly damaging things to me when they learn that I had TNBC, or that I had multiple tumors: “Oh honey, I’m sorry.” “Wow, that is a rough one, I’m glad I didn’t have that” and so on. I heard one story of a woman who was told by her doctor “just write your will, because your cancer type is difficult to survive.” The woman who related that story to me about her friend was also a TNBC survivor, and she said this: “That just devastated her. But, it’s seven years later. And she’s still here.”

It's possible to look at being triple negative in a positive light: there are hormones, including those such as estrogen that are very prevalent in women's bodies, that do not blow up my cancer. Moreover, I don't have to go into menopause. But, you know, I'm bad at the whole positive spin on cancer thing. And, it's hard to find role models. After all, statistically speaking, there is no such thing as a 20 year TNBC survivor. Because 20 years ago, TNBC didn’t exist. It’s like purgatory. That was a real place, until the church decided “JUST KIDDING!”

So it’s not heaven, nor hell, but somewhere in between. Some of us are still here, still in limbo, wondering if being early stage means a damn thing with this TNBC we were unlucky enough to have. We are getting a little louder, forming crackpot theories, volunteering for clinical trials, warning others about birth control, trying to stay skinny, swearing too much, not dead yet!
Posted by Katy Jacob at 6:41 PM