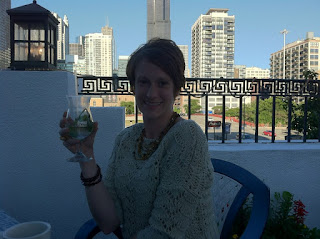 Sit in my windowless office at work feeling like I’m crawling out of my skin, with tears rolling down my face for no discernible reason, except that I am experiencing these new-to-this36-year-old woman mood swings brought on by hormone changes from my second puberty, and because I am unaccustomed to such displays of emotion, especially in inappropriate settings, I begin to think about all kinds of things that just make me more sad and nostalgic and depressed and really, just verklempt, things like:

The age I was when these moods would have been normal, and I was just living so completely, and it seemed like everything was new--my body and boys’ bodies and cars and friends I knew I would never keep and getting drunk and that whole process that is just so cliché and so real, that time when you become yourself—and the idea of a future and how hard life was, in a real and adult way even though I was really just a child

The childhood I had, or didn’t have, the way I see children who are so at home and confident in their bodies and their minds, and the things that I learned having never felt that way from the time I was six years old

The fight I had with my husband this morning that I didn’t know how to fix nor feel inclined to fix, the conversation I had in my head that began, well, it is his fault, yes but who cares what is the point in sitting on the train next to your partner and lover in silence, and being too stubborn, with a fuse too short, and too much baggage weighing down everything we’ve been through and knowing I should change and just forget it but also knowing that I’m too stubborn and I won’t

The fact that I just don’t do things the right way, the knowledge that I love to be alone even though I have those beautiful children and a young loving husband and friends whom I will meet with on several nights this very week, and that I will just have to tell myself that my kids like to know that I’m there, and that for us, “there” is relative, they don’t necessarily care where or what I’m doing but they want to know that I’m THERE, that I exist, that I come home to them, that I will always come home to them

The guilt I feel over how much I’ve needed a vice over the last few years, and how bad I am at achieving that, so rather than go for something really good, like an affair or a gambling addiction or a drastic and irrational career change, I have gone for the one thing I shouldn’t do and have started drinking regularly which for me means like one drink a day, an amount that even my mother approves of, since it helps me sleep and it is oh so hard for me to sleep, showing that I’M NOT EVEN GOOD AT THAT, and that vice has led me to gain a few pounds, literally, as in two, and that is the OTHER thing I’m really not supposed to do, damn weight gain, and because even that two pounds bothers me for various reasons I know I need to just stop and GODDAMN IT WHY CAN’T I JUST HAVE A VICE?!

The conversation I had the other night with a woman who is at the early stages of dealing with this damn disease, who doesn’t know when she will get surgery, or if she needs chemo, and is hoping she can escape it all, and I tell her that I wish she could too but we both know that she can’t, and I say just think about it it’s like any other disease that people deal with, you take medication for things like epilepsy and diabetes and heart disease and this is just a version of that, look at me, it’s two years later, you are just beginning but it does get better, and she says well maybe I could just be like Steve Jobs and do alternative treatments and I think to myself, Jesus I hope he is not the goal, and I say out loud, well think of it this way, surgery and chemo suck but it’s better than being dead, and she laughed in such a real, appreciative way, she slapped the table and said thank you, I will remember that on my bad days, I will tell myself, ok, this sucks, But it’s better than being dead.

The thought that of course this is better than being dead, it all is, all there is in the world are things that are better than being dead, but if I could I would dedicate my life to the opposite of feeling dead and just feel alive alive alive all the damn time and no it's not cancer that made me feel that way, I have always felt that way as long as I could remember, but I've had to get that extraordinary feeling within this very ordinary life

Yeah, one of THOSE days. So I wrote this. And, this. As always, thank you for reading. I guess they can't all be funny. And I only have about 36 hours a month where I am even capable of being this deep, so it won't be long till I'm back to talking about completely inappropriate things. Promise.

Conversation with a Bald Eagle
by Katy Jacob

How strange to learn that eagles truly have faces,
in the same way our children have faces.
What is normally but a silhouette is now close enough to study.
I can see the beak protruding from the white head,
and it could be a picture, but for the circling.
Circling so gracefully, the world seems to pause.
I am mesmerized, rooted inside the time he has made.

Then I come to and paddle the boat faster,
away from the loons I am sure the eagle seeks.
I hope he will stay near me; I am lost in fascination.
And sure enough, he follows, getting closer.
There are no sounds but that
of my feet on the paddles and the wind in the water.
The loons are in hiding.
There is no one but me on the lake.
I slow down, stop, and wait.

He hovers, and it occurs to me
that he is thinking, how strange to see
that egg turning towards me,
why is that small bird inside such a large blue nest?
I think of the phrase “bird of prey.”
I am in limbo, in short sight of the house,
but I will need to fight the waves to get there.

We seem so small to one another,
given the distance between air and water.
Neither is sure of the other’s intentions.
Eventually, I begin to paddle home,
and he leaves me, heading north.
It is good to come to such an understanding.
I realize we all feel this alone.

It is worth knowing the right names for things.
One bird’s meal is another’s final mistake.
One man’s symbol of hope is another’s death omen.
It is important to understand that the one is a privilege,
the other a certain promise.
The rest is just air filling in the circle,
helping us to forget what lies right outside the perimeter,
in the space where we are and we aren’t.
Posted by Katy Jacob at 3:58 PM