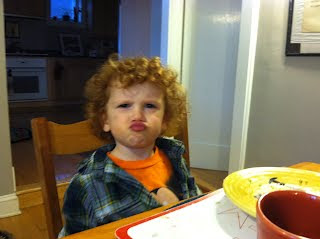 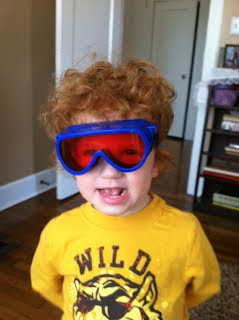 Today my son is three years old. I didn’t know if I would see him get to this age back a few weeks before his first birthday, when I was diagnosed with triple negative breast cancer. I’ll always be glad that we celebrated his birthday as normally as we could, and I’ll also always be glad that he won’t remember how emotionally wrecked I was at the time. I wrapped the presents, baked the cake, took pictures as he smashed it all over his face, cleaned him up when he vomited the cake out a few hours later. His first birthday was pretty routine, except for all that death lurking in the background.

This year, he gets to have his first birthday party with friends. He’s a little ringleader, a child with way too much charisma for his own good, so I capped the party at 6 kids to make my life easier. I try not to think about the parties he’ll throw for himself when he’s older, like, in three years.

I really don’t know what to say about Augie. Everything that I can think of comes out in short phrases, small ideas really. I feel like I am yelling at him most of the time, trying to stop him from hurting himself or other people, trying to control that crazy little person and losing the battle. Sometimes, I get to talk to him normally, and I realize how much else is going on in that little brain besides deviousness and mayhem. I’m just not sure I usually get the chance to say it. So I’ll use this medium for that purpose, and say a few things to my son.

Augie, I want you to know that there was a time when I thought you would never speak, back when you were one and a half and I was in the middle of chemo. My guilt brought me to the point of near obsession on this point, and I had you evaluated by Easter Seals. You were a little slow on speech development, but on everything else you excelled—especially all of the social development milestones. In fact, I don’t think the counselors wanted to leave because you were so damn cute that they just wanted to play with you all day. I should have realized then that you already knew exactly how to wrap everyone around your finger. I also should have known that you were apparently saving up all your talking for the talking back you were about to start doing. And yet, it’s really hard to stay mad at you, even though you deserve for me to stay mad at you. How can you be mad at someone who is always, ALWAYS, singing? How long can you stay mad at a kid who has so much empathy, so much exuberance, so much joy? And how, I ask you, are we going to keep you safe and alive until you’re old enough to know better? Will you ever be old enough to know better?

You try me, kid. But I love you anyway. I need to document your preschool age nuttiness, lest you run us so ragged when you’re a teenager that we forget that we already knew what was coming. So, for the record, I have no idea how you learned to do the following, all before age three:

1. attempt to sneak out of the park with a bunch of girls a few years older than you, then, upon getting caught, shield them all with your arms and declare: “Look mommy, we weren’t doing nothing.”

2. Kiss me good night by grabbing the back of my head with one hand, my face with the other, and swooping in

3. Use your basic math skills to surmise that it will be 19 years until you can have a beer

4. Discipline yourself, by declaring that you will soon be going to the corner or to your room, because, clearly, you cannot avoid whatever misbehavior you are about to inflict on us

5. Convince teenage girls that you are “scared” of things so that they will let you sit on their laps

6. Put your hands up in the air and begin dancing and singing “All the single ladies” at the top of your lungs in the grocery store

7. invent games such as “crash,” that involve you sparring, running, and then crashing into your dad over and over again until you are just short of a head injury

8. retaliate against people for any minor infraction or moment of not getting your way through the use of homemade weapons, including shoes, toy cars, the garden hose, a jump rope, Kleenex boxes, and fruit

9. refuse to listen to almost anything we tell you to do, but follow your sister’s authoritarian rule like a good little soldier

10. attempt, unsuccessfully, to play your dad and I off of one another, lie about what the other parent said RIGHT IN FRONT OF US, and then grab one of us by the chin, turning the face towards you and asking again very emphatically for what you were just told you couldn’t have

11. make up long, complicated stories while looking through books, because you are jealous that your sister can read and you can’t

12. surprise me at every turn, asking if you can bring a rock to keep you busy when we go out, looking around during the annual breast cancer walk and declaring “gosh mom, there are lots of girls here,” or running into the room when you had just turned two, arms waving, shouting "GUYS! You won't believe this!"

14. observe keenly the differences in things, be it the number of doors on a car, meaning a coupe is meant for only 2 people – “that’s cool!”, or that freight trains don't run on the El tracks, or that families with dogs and cats have “both kinds of people”

15. have a sense of humor rich in physical comedy, but also understand the nuance of timing

16. love all animals so completely, when we have never had any pets

17. get so used to hearing your first and middle names (Augustine Jacob!!!) called out to you in exasperation that you have taken to calling me “Mommastine Jacob” as a joke 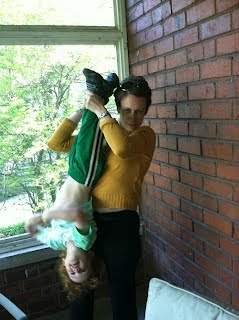 18. force me to learn to use phrases I never thought I’d utter once in regular rotation: “no more choke holds!” “do not sit on your sister’s head!” “where are your pants?” “where are your UNDERPANTS?” “that doesn’t belong anywhere near this house much less IN YOUR MOUTH!”

19. become serious and introspective in an instant, and say something profound that leaves us in shock and wondering who you really are

20. ingrain yourself in everyone’s brain. College kids who used to babysit for you visit you on breaks. Everyone asks about you. You make friends everywhere you go. Teenagers and senior citizens alike seem to think you’re fun for a party. A month or so ago, I was talking to a friend about some of your crazy antics. She has known you since you were born, back when you refused to open your eyes for two months and all you did was nurse and sleep. She adores you, as most people do. She told me that we were in for some real trouble starting in about ten years. And then she said, you know, it’s going to be so much fun, watching him grow up, seeing what he does, how he turns out.

And that’s the truth. I plan to be there to see it for myself. If fate doesn’t allow that, well, you have definitely made sure I wouldn’t be bored in this life. And even though I don’t really believe in this kind of thing, a part of me does believe that you’ve been here before, and apparently you learned a few things about how to have a good time your last time around. Thank you for reminding me.

Happy birthday, kiddo. I love you. 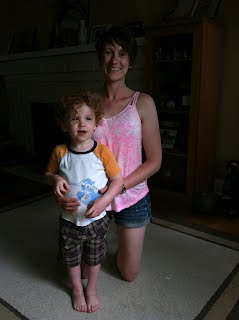