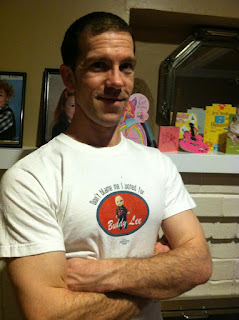 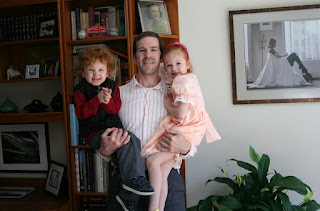 Today is Gabe’s 37th birthday. We have a crazy day planned; I will rush home from work to get ready for a formal event for Row4Row tonight while he runs around and takes Lenny to gymnastics (where she is being evaluated to see if she can bypass the next few levels and begin to be groomed for the competitive team; how did this happen? I can’t do a cartwheel. When I was a kid I played basketball and floor hockey. Who is this child?), drives home, waits for the teenage babysitter, and then gets ready to meet me so we can go out alone for a late dinner at a steakhouse with a rooftop. I don’t think he’s happy with his role in this plan, but, you know, he’s doing it. Even though it’s his birthday.

He is impossible to buy presents for, and he asks for boring things like socks and rain boots. In fact, his gifts were so boring this year that I didn’t even bother to wrap them; he took them out of the bag this morning after the kids and I sang Happy Birthday to him and he blew out a candle I stuck in a blueberry muffin. I am not that good at sentiment, so I will give him a card from the store and it won’t be filled with accolades and proclamations of undying love, unlike the cards he gives to me. I am hosting a party tomorrow, and I will bake him a cake and make his drinks. I have one surprise for him but it’s a surprise, so I won’t outline it here. The present he is most excited for is the dress I will be wearing tonight. I was trying to figure out what to wear and I tried on a bunch of different things, including this $20 sequins-filled number that I bought in the juniors department at Carson’s at some point that has been sitting in the closet because, really, with my life, where would I wear that? Gabe just about fell over when he saw me, and said that me wearing that would be a great birthday present for him, though I shouldn’t expect him to be able to hold a conversation with me or make eye contact while I’m in it.

Ah, my husband, with his metabolism and hormones; it’s like the tenth grade up in here sometimes.

And that is one of the things I do appreciate about him. There is no pretense with Gabe, no attitude. He has a terrible poker face. He’s cheesy. Sometimes he’s really shitty. He doesn’t know how to hide it. And he adores me, and lets me know that, which can drive me crazy, since I’m not very mushy, but it’s also quite endearing. I’ve said this before—Gabe and I fight. Cancer made that worse. We might be that couple that annoys other grownups because we act like teenagers around each other, but just because we have that passion doesn’t mean that I don’t have moments when I want to throw in the towel. When you’re married, you always have times when you’re like ships passing in the night. There’s so much to do, especially with two working parents, and sometimes life is just filled with those things. And then you get shitty with each other. He gets crabby about nothing and snaps for no reason. And then I yell, and he pulls away, and then we become really annoyed with each other because we have such different fighting styles. Or, we fight, walk away from each other, then he falls asleep and I’m all OH HELL NO YOU AREN’T SLEEPING!

Not most of the time, though. Most of the time, I do realize that it would be hard for me to be married to someone else. I’m challenging in a way that requires someone who is not only up to the challenge, but intrigued by it. I have always known that about myself, and I’ve managed to find guys who fit the bill—at least for a while, sometimes for years. This guy bought in for forever. That took courage, right? And it’s not like he’s had the same experiences with me that other couples in their 30s have. You know, what with the cancer and all.

So, here’s my chance to do what I never do and list some things I love and appreciate about my man. Read it baby, because you know I will not be bringing these verbal compliments into regular rotation. For better or worse, I’m a terrible ego-stroker. But here goes:

1. His willingness to make major decisions as if they are minor decisions (Don’t want to live together if we’re not going to get married? OK let’s get married! Don’t think I want to have kids, but wait I would definitely have kids with you! Buy a house? Become landlords? Sure, why not, what’s for dinner?)
2. His total lack of daddy issues, even though he has 5,000 reasons to have them
3. His appreciation and understanding of luck
4. The way he will always eat, shop, and consume natural resources as if he is on the edge of starvation and abject poverty, no matter how far away we are from those things
5. The fact that he’s “that dad;” the one with six kids climbing on his back, who has squirt gun fights with neighbors, does cartwheels down the hill, plays shark attack and generally roots around on the floor or in the mud while I do something else
6. The fact that he can sing, but he can't dance at all, but he does it anyway because he just doesn't care
7. His nurturing side, because I’m not that good at it, and someone in our house has to coo at the kids and cry at Hallmark commercials and call people sweetie
8. That he is such a homebody (though that can be a problem sometimes) and so into spending time with the family that his idea of an awesome night is to catch lightning bugs with the kids and then watch Hawaii 5-0 on the couch while holding my feet in his lap
9. That he doesn’t have any addiction problems (seriously…what a bonus! I could not deal with a hard-drinkin man!)
10. His faithfulness, which I never question or even really think about, even though he still has that crazy libido, which is also nice, I admit
11. The fact that he’s like the male version of the hot librarian, kind of dorky, refuses to wear contacts, etc., and then he takes his glasses and his shirt off and people are like, wait, who’s that? Where’d that come from?
12. His interest in things that are different from mine, like astronomy
13. His subscription to the Economist (though really, can you recycle them at some point? WHY ARE THEY ALL STILL IN MY HOUSE?!)
14. His understanding of nontraditional families and acceptance of extended family drama
15. His company during football season, and the way he laughs at me during March Madness or other sporting events when I become a crazy person, yelling at the kids to get away from the TV so I can watch the game and saying hey baby, I’m not leaving the couch so you need to make dinner, ok?
16. His reluctant acceptance of all my shoes and how good he is at painting my toes
17. His ability to do awkward physical things, like carry enormous, heavy and unwieldy appliances and sinks etc. into our house, or the way he can contort his body into some strange shape and somersault through a small window when we get locked out of a house
18. His lack of concern with needing to appear manly, down to the fact that he can actually give other straight guys compliments
19. The fact that he can do pushups with me lying on his back (even if it’s only a few)
20. The way I’ve learned to get over the fact that Lenny will always be a daddy’s girl, and Augie will in some ways be a daddy’s boy, because I am really happy that they like their dad that much.

So next time you get insecure or worry that I will leave or wonder why I love you, Gabe, you can read this back to yourself. Because my answer in person will always be, I just do, ok? NONE OF YOUR BUSINESS! 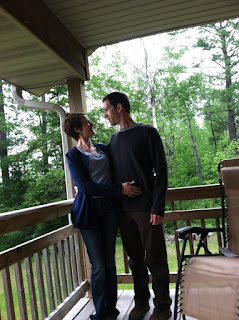