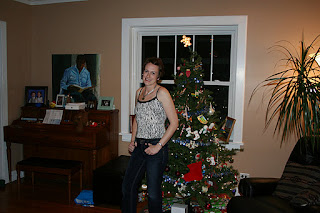 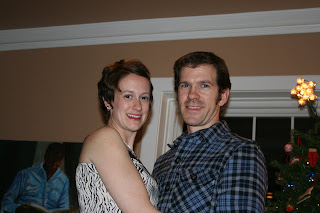 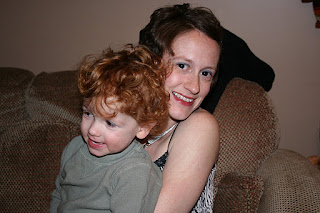 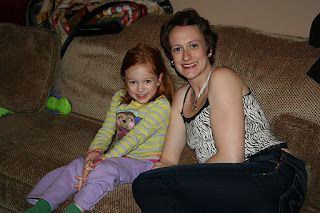 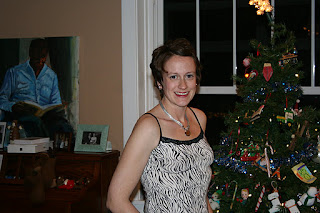 I'm pleased to say that last night I had another of these post-cancer (I get to say that now, right?) epiphanies. I wrote a blog last week about forgiveness, religion, my imperfect reactions to this strange trip, and, among other things, about potentially corrupting virgins (which seemed to be the most popular aspect of the blog). I realized that none of that was nearly as relevant as the date when I wrote it--December 12. I completely forgot to write a blog on December 10, which should have been one of the biggest red-letter days in Katy's Cancer Timeline.

On December 10, 2010, I finished cancer treatment--hopefully for good.

My mom and brother were at my house last night when I mentioned that I felt like I needed to write a blog to demarcate one year post-treatment. My mom laughed at me: "Who'd have thought you'd ever forget a thing like that?" And that's what's amazing.

I planned to write last night after I realized what had happened, but Gabe and I got otherwise occupied and then I fell asleep. Before that, I changed into the same outfit I wore last year on December 10 and posed for some identical pictures of myself, alone, with Gabe, and with the kids. I intended to splice them together so the difference would be easy to see, but I got lazy about that too. If you want to see how far I've come, how much difference a year can make, just check out that blog:

Look at that cancer girl! No eyebrows or eyelashes, awful chicken-little hair, exhausted from chemo-induced menopause! Then there's the stuff you can't see, the burned chest, the small bit of flesh that ripped off because I was so damn happy, yet angry, about everything that I tore my radiation tape off as soon as I came home from that last treatment. I listed all the things I had gone through, all the procedures, all the bullshit, in that blog. Reading it makes me tear up even now.

And then this year, December 10 rolled around, and I went with my family on a tour of the new Rush hospital just for fun, where Gabe won an autographed Paul Konerko ball in a raffle, and then we went to a kids' birthday party, and that night Gabe and I went to a holiday party just for grown-ups and had too many pudding shots. And December 10 just seemed like another day on the calendar in this busy month of this busy year, where cancer and its vestiges represent something that absolutely happened to me (I can't get away from it, with the daily physical therapy and chronic pain; I never actually forget it), but that in some ways happened to someone else, some scary-looking lady who only vaguely resembles me.

I knew there would come a time when I could selfishly be happy for this medium, this virtual time capsule. If I hadn't written it all down, if I hadn't photographed everything, would any of this seem real? Can the virtual make life seem more physical? In very specific instances, I guess it can. When major things happen in your life, it's hard to imagine what life was like before--before you were hit by a car, before you had kids, before you met your spouse, before you were suddenly grown up, before you had cancer--even if you do remember your previous life very well. It's just so hard to articulate it and make those mental comparisons. Writing this blog for almost 600 days and putting it out in cyberspace gives me a good hard slap in the face to remind me of my own experience at the same time that it helps me process the things that have changed, and the things that haven't changed.

And that's how life is--things change so much, and yet it seems that they don't change at all, that you are always just the same. I thought about this as I met up with a friend over the weekend and we went out for Indian food before going to a bar. I haven't had Indian food since right after I shaved my head, when I was at the beginning of chemo and I felt that I had an appetite for the first time in 10 days. I ate a normal amount of not-very-spicy, vegetarian dishes, and felt absolutely horrible afterwards as my body rejected the very idea that I would eat like a normal, albeit small, woman. I blogged about how after our date, I forced myself to throw up by sticking my fingers down my throat. I weighed about 111 pounds and didn't exactly need an enforced diet plan. How strange to feel so ashamed and relieved at the same time, sitting on the bathroom floor with my husband shaking his head at the whole scene. And then, this past Friday, I just ate and ate, and had a beer, and then went out and had another one, and I felt just fine. Amazing!

While we were out we got into a conversation that was at its core about the nature of time and the unique position of our generation. There is so much in pop culture right now that is nostalgic for the youth of my specific generation--the songs on Glee, the remakes of every cheesy TV show and movie, the hipness of moon boots and Ms. Pacman, the ungodly return of leggings. It seems bizarre to me, and somewhat sad. Who wants to relive their youth, really, at least the youth that existed the way it existed for many of us, with the absolute realness of life and the suffering and the hardship and the inability to control your immediate destiny, which is what youth is ultimately all about? Who wants to go back there, when you are in the place where you wanted to be back then but couldn't really imagine?

But after thinking about it, I've decided it makes perfect sense, this nostalgia that's taking over these days. In a way, we are the last pre-digital generation, and that explains about 90% of this current pining for the past. I think kids 20 years younger than me are in some ways nostalgic for my youth. They can't imagine how it was, and it seems so odd, it must be fascinating. We're the folks who showed up at college, and spent huge amounts of money to call our boyfriends back home long-distance from a corded phone to ask "do you have this thing called email? it's free. should we use it to keep in touch?" only to hear him answer "nah, what's up with that? I want to hear your voice." We did research using books and something called "periodicals" in the library, wrote papers on typewriters and word processors, saw our high school friends a few times the first year and then not at all. And sexy photos, sexting, and all of that? Huh? "No baby, I want to see you in the flesh." You know--the actual flesh. There was no substitute worth substituting.

And then those same boyfriends who couldn't imagine using email carried pockets full of change to call you from the payphone, and wrote you love letters with awkward handwriting, sometimes forgetting the stamp and having to give you the message in person. And you have a box full of such letters from various boyfriends, and from your friends, and even from your grandmother. Those letters are written on hotel stationery, napkins with various coffee shop logos, the back of cereal boxes. And you could gauge how much someone cared about you by how willing they were to read the letters you wrote, because you had the worst handwriting of any female on the planet, and your mind was too quick and convoluted to quip too easily on the page.

And when you said goodbye to someone, it was often forever. In that Kiss and the Story blog, I wrote about the boy I didn't kiss right before we both left for college. When he looked at me with that pained, bittersweet expression on his face and hugged me goodbye, that's what he was saying. Goodbye, Katy. Have a nice life. I wish I could have talked to you for hours before this, I wish I had kissed you before, because now I will never see you or talk to you again. Not, I'll skype you on Monday, we'll keep in touch on facebook. Will my daughter ever know what it's like to have a boy on the edge of manhood look at her like that? Does the fact that it makes me sad that she might not make me inescapably old-fashioned?

I know I sound 100 right now, and you all know I love my facebook and my virtual connections. I just think there's this strange acknowledgment of people my age who were the last to remember some of these things as they actually WERE, not as bits of nostalgia. The wooden phone booth? I don't love it because it's quaint. I love it because I've used it to call people from bars because I was a little drunk and I just had to tell someone something and he or she was the only person I could think of who would pick up the phone at midnight.

What does this all have to do with cancer one year later, now that it really is all over but the shoutin'? Well, this blog has enabled me to actually see what it was like, to remember how it felt, to go through all this crap over the last 18 months. And yet--and yet. It does not in any way replicate what it was ACTUALLY like. The photos of me last year on December 10 do not portray the me that walked around the streets of Chicago as if looking like that was normal, they do not portray the husband who honestly thought I still looked sexy after I was stripped of all the things that I thought made me attractive, they do not portray the looks I must have received as I jammed to Nelly Furtado's Loose on the daily drive to radiation. I know I don't look especially lovely in those photos, but maybe it was as Nelson Algren said about my beloved Chicago--you may well find lovelier lovelies, but never a lovely so...REAL.

You can look back, but you can't go back, and God help anyone who wants to do that. A year passes, and you can talk about what's changed, you can marvel at the things that remain, but the bottom line is that a year has passed and you were there to see it, and millions of other people can't say that because they can't say anything anymore. I could write about that, about what that means, but I could also try to show it, tell it, use it in real life to get someone to understand. The other day Lenny was whining about wanting something that Augie had, and I launched into this long, annoying mom lecture: "Lenny, you need to stop being jealous about the things that Augie does that are different. There are so many things you get to do that he can't do, because you're almost six, and he's only two and a half. When you were his age you didn't know how to draw, we wouldn't let you use scissors, you didn't do gymnastics and it was hard for you sometimes to use a fork. Be glad you're five. Be glad you're whatever age you are. Some people walk around saying, I wish I was young again, I wish I was a teenager again. But look at me, not me! I'm glad that I'm 36." "Why, mom?" And I answered, exasperated that every statement in my house has to be met with a question: "Why? Because! Because, Lenny...I earned it."
Posted by Katy Jacob at 1:09 PM