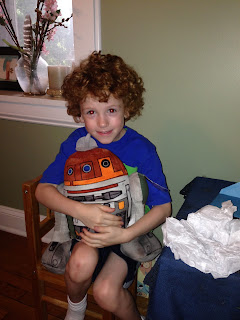 The End
by A.A. Milne

When I was One,
I had just begun.

When I was Two,
I was nearly new.

When I was Three,
I was hardly Me.

When I was Four,
I was not much more.

When I was Five,
I was just alive.

But now I am Six, I'm as Clever as clever.
So I think I'll be six now for ever and ever.

Augie, today you are six. I honestly don't know where you came from--who are you like? Me, I suppose, though your grandmother will tell you I wasn't quite as sneaky and I did listen, at least occasionally. You're like Calvin without his tiger Hobbes, or maybe you are just like yourself. Sometimes you are so difficult I can't even stand it. It's not hard to be your parent--it's easy, because it's easy to love you, but it's hard not to focus on the struggle. And no, it's not because you're a boy. It's not because you're active, or smart. It's because you're a nut. You say and do things that seem impossible. Your dad suggested I write this blog post about your "larger than life" personality. I don't really know how to do that. So I'm just going to quote you instead. Here's some things that you've said recently that have made me...pause. 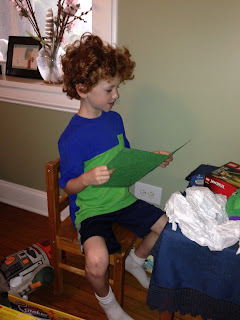 OK, Mommastine (when you're in trouble and have your full name Augustine shouted to you);

This is my story. This is the story of the Dark Pizza. He's a bad guy, because he's angry, because he got burned.

I think God is dead. (reconsiders) God is the wind.

I don't know who those girls are. Girls talk to me, and I don't even know them.

Wait. You mean it's possible to play football AND sing on stage?

I know you think I should practice piano with both hands, but you don't seem to realize my hands are very small.

DAMN!! (when losing at air hockey)

I wish we didn't ever have to die.

Babies don't always need to come out of a mother's body to be born. Not if you're a platypus. 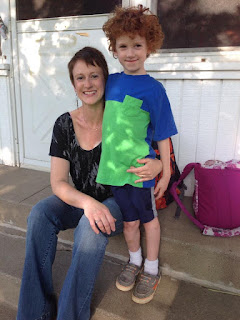