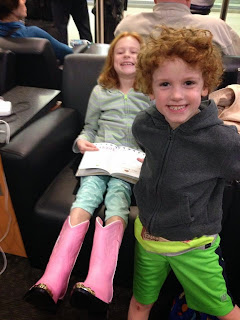 I've written about my son's night terrors before, and about how bad they were while I was doing chemo the second time. Within a few months of me finishing treatment, they all but vanished. He sometimes has bad dreams, and he's started to get what seemed like a terror one or two times and we've been able to nip it in the bud before it happened.

When I was nine, I had night terrors. It was at that specific time in my life, following my car accident, when I was confronted with death and my own mortality and I didn't know what to make of it. I have no memory of having disturbing dreams. I was actually terrified of sleeping. I must have been thinking what Augie once vocalized to us in a half-sleep at the end of a particularly brutal night terror:

And he was saying, I'm afraid this isn't real. I'm afraid that the line between sleep and wake, real and fantasy, life and death, is too thin and transitory. I'm afraid of the things I know in my brain that no one talks about in regular life.

It's that blurring, that glimpse, that is terrifying. With night terrors, we have a little bit of an ability to say that because the bad things happen when the person is technically asleep, the thoughts are not, well...real. That is somewhat comforting when your four year old flies into a violent rage with his eyes wide open and begins screaming in a nonsense language and pointing at demons that only he can see.

It's somewhat comforting, but not entirely comforting.

I had almost forgotten how witnessing those terrors made me feel--helpless, and so sorry for him, and sad that he was thinking about things bigger than his life and outside of his control. Empathy too, and understanding. 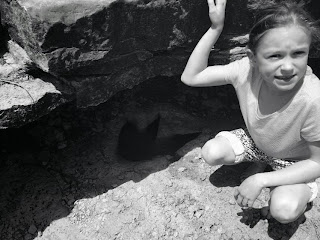 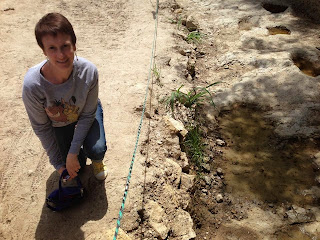 But time passes and fills with things that aren't the hardest things because that is one of the incredible things about life. And so we found ourselves in Texas over spring break, driving to my brother's school from Dinosaur Valley State Park, where you can walk in a dried up river through 100 million year old dinosaur footprints. This was just a few weeks ago and I've been wanting to write about it, but it seemed such a small thing, and I thought it wasn't too important.

Augie fell asleep in the car. He stopped napping years ago, but car rides still have that effect on him, especially after such a long day of hiking in the sun. We got lost due to a road closure and a detour that didn't turn out as straightforward as we expected. Soon after we found ourselves on the right road, Augie woke up--or so we thought. His eyes opened wide. He sat there for a minute looking stunned. And then he started to cry.

Hey Aug, what's wrong? You just woke up, we'll be there soon.

Gabe looked at me as if to say, shit. should I pull over? Lenny tried to talk rationally to him. Augie, your hands aren't doing anything. They look totally normal.

I told him he would be fine, go back to sleep. I told Lenny he was having a night terror. We let him cry. He looked absolutely lucid and wide awake. He spoke in perfect sentences. He was looking at his hands and seeing something that we didn't see.

Later, we asked him about it. He pretended to remember and say that his hands were shaking from the car. Of course he had no idea what had happened; he was just trying to play it off like it was normal.

We can tell ourselves he was sleeping. We can discuss in whispers whether that qualified as a hallucination instead. We can worry that there is something going on there that is more than the subconscious overworking itself in sleep.

It's hard to see something like that in such a little kid. It's even harder when your other little kid witnesses it. She usually slept through his night terrors, even the terrible ones when he was screaming and running and slamming doors. But I learned something from this small moment.

My daughter did not know he was "sleeping." She assumed that he really thought something was happening to his hands. She was very calm in trying to talk him down--and my kids fight and yell at each other all the time. She was patiently trying to explain, and then realized it wasn't working, so she talked to him about something else. Once he went back to sleep, we explained to her that he was probably having a night terror. She didn't seem fazed, or judgmental. The fact that her brother was hallucinating right in front of her (she, again, must have thought that's what was happening) made her feel kind of sad and scared for him, but not for herself.

Like I said, it's a small story. I don't know that it means anything at all.

But it's hard to see something like that in such a little kid. He was awake but asleep, in our world but not of it, straddling the line between what is real and what is not, and he was trying to tell us something. It was required of us to pretend we didn't know what he was trying to tell us. We have each other, and another child, to think of, to spare.

But I thought it all the same. Oh honey, I know. Look at your hands. Look at all that flesh and blood and muscle, moving and grasping and warm. Cry out from the shock of it, how quickly they go cold, and turn to nothing but bones. I know.
Posted by Katy Jacob at 7:27 PM