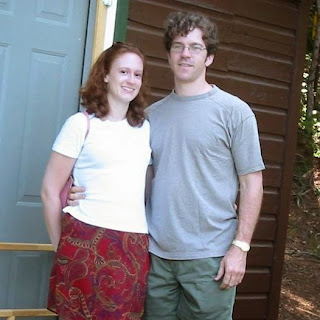 Twelve years ago today, I met a guy. When this all started, we were 27 years old. I felt old, like I'd already lived a hundred lifetimes. I hadn't been married but had had several serious relationships, including one that lasted more than six years and seemed like a first marriage. He was trying his hand at being young and carefree and wasn't all that good at it. He had only had one serious relationship before in his life. We were so different, in ways seemingly opposite of how men and women are expected to be different. I was pretty sure he wasn't my type, even though I didn't have a type. There was a messy love triangle that summer that left me feeling emotionally spent; he didn't even know it was an issue. I've given the facts before, down to the absurd marriage proposal. I may or may not have recounted the fact that we almost got divorced within six months of getting married because he felt such pressure related to doing something he didn't understand. Our childhoods caught up with us, or maybe they brought us together.

He knew he wanted to marry me when I said the wrong thing, the inappropriately nerdy, non-romantic thing about orbital motion when we should have been basking in the romantic glow of that glorious beach sunset. I knew I wanted to marry him months later, when he helped carry my grandfather's casket because the originally-scheduled pallbearer didn't show up. He had never met my grandfather; in fact, my grandfather died the day I intended to introduce him to my boyfriend. Other people have rainstorms and never falling asleep and Paris; we have physics and funerals.

I guess it all makes sense, come to think of it. 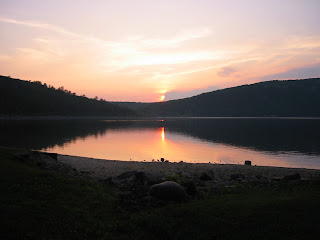 A lot of things have happened.

Things happened slowly and all at once and within three years of knowing each other we were married with a baby and a house, having sold the condo I'd bought as an independent 25 year old. That is the kind of thing that people say when they try to explain how things were. But that doesn't really explain anything. Twelve years with a person cannot be boiled down to the things you did together, the houses, the babies, the jobs, the friends. Twelve years together is a long time and a short time. For everyone, the years fly by but are filled with tiny moments.

For us, the time was cut in half.

How could I know at 27 that at 39 I would be with a man who would have spent almost half his years with me as a person with cancer? One minute, we were young parents of two small children, including a nursing infant, and then...we were still those people, but one of us had an aggressive form of cancer and the other had to deal with that fact. And then, we had to deal with it again. We never saw that coming; no one ever does.

Did he love my long red hair, my two perky breasts, my health and assumed longevity, my impressive memory and manic energy? I suppose he did. But he loved me more. And whatever I was, was something I still am. He doesn't seem to think I have changed, at least not in ways that are important.

I've said before that I think love is a decision. It is that more than it is anything. No one can talk you into it, and no one can talk you out of it. But love has forms, and the forms change. Loving a lover who has been brought to a place where she seems a ghost of herself must teach you something. I think of how having children has enabled me to see everyone in the world as a child--including myself, and my husband, and my friends and old lovers and people's parents and everyone. I think about people as children and the shit that happened to them and I imagine how it should have been different because I know that I would have done things differently if I'd been in charge.

Seeing someone see me lose so many things and decide I hadn't lost anything important has taught me things about grace. Most of the time, it is possible to float through life without having to break things down to the lowest common denominator. For us, at some point, shit got real. He stopped caring that I am demanding and difficult and I stopped caring that he is dramatic and ridiculous. We stopped trying to change each other or ourselves and realized that we are glad to have found each other and to still be here. We fell in love with each other when we were young and healthy. We did not learn how to love each other better by growing older and facing death. We did not become stronger because of cancer, but we got to a point where we could compare the problems of marriage and work and family to the problems of life and death and make decisions on that basis.

It took years for Gabe to admit to me that he never sleeps inside our bed, in the comfort of the sheets and blankets, when I travel for work. He sleeps on top of the bed, lying horizontally across the comforter, or on the couch, or in the guest room. But he feels strange sleeping in the bed when I'm not there. Ten years ago, that would have seemed melodramatic to me.

He's seen that bed without me in it. He saw it years before the possibility became tangible, but it took cancer to bring the admission out of him. Since we stopped worrying about how it might sound, we have said crazy things to each other.

Me: I don't know why I love you, what business is it of yours? Just believe me.

Him: They could cut off your head and put it in a jar and as long as I could still talk to you, I'd be ok.

We've seen a lot of things in a lot of places. But I still haven't seen a sunset quite like that one in Barraboo, Wisconsin, over Devil's Lake, when I was 27 and he was newly 28.

Oh, who am I kidding? Of course I have. We have both been seeing that sunset all our lives, and that's how we've managed to remain who we are.

Twelve years ago today, I met a guy. 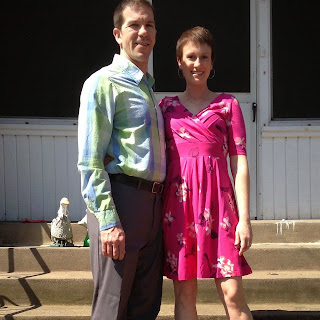