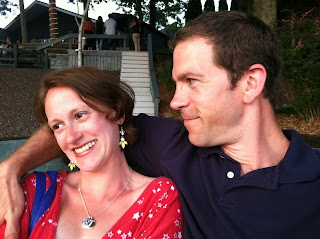 So, I got engaged yesterday. To my husband. As some people know, I decided a few months ago that we've been through so much together that we should get married, again, on or around our upcoming ten year anniversary in October. I mean, by the time Gabe and I had known each other 3 years, we had both changed jobs, I graduated from grad school, we bought and sold a house together, got married, and had a kid. It went like this:

Meet at 27, date for 7 months, have conversation about living together wherein I told him that I had no motivation to give up my independence because I loved living alone, unless it was for something more permanent and he said, yeah I thought maybe we could get married. So, move in together at age 28 after dating 8 months. Get officially engaged at age 28 after 10 months of dating in a way that will become an epic and legendary story in your family. Sell your condo 6 months after getting engaged and buy a house in a neighborhood you had never even visited. Change jobs before than even happened. Get married at age 29 because you didn't want to get married in the summer when you both would have been 28 because you thought oh how about October no one gets married in the fall because you are a clueless mess when it comes to anything like WEDDINGS. Get married almost exactly a year and a half to the day after you met, and have a kid less than a year and a half later.

It was meant to be, I suppose, though I'm not sure what that means. I reminded Gabe yesterday about a conversation we had when we had been dating two or three weeks. For some reason, after a Wilco concert, he decided to talk about relationship deal breakers. For the life of me, I can't remember how this conversation started. But I said, well I have had a lot of relationships, including one really long one, and it's different when you enter in a relationship when you're 17 versus 27. You know more about what you want, and you don't want to spend years trying to find it. You figure it out quickly. He kept pestering me about what my dealbreakers were until I finally said, well, for example, I think I want to have kids and so if someone didn't want that at all, I would believe him. He said he didn't want to have kids. I figured it was too early in the relationship to talk about such deep things when we were having fun so I said, we need to talk about something else. On went some random conversation until we had almost reached the car (we were walking along Michigan Avenue this whole time). Out of the blue he said, well, I guess I might change my mind if I met the right person. I said huh? What are you talking about? and he said, I mean, about kids. If I met the right person I would feel differently. Like, I would have kids...with you.

Two weeks in, and the deal was basically sealed. Who knew? Later he told me that he REALLY knew he wanted to marry me when we had been dating about two months and we went to Baraboo, WI for his 28th birthday, and as we were sitting watching a particularly glorious sunset on the beach, I said some nerdy shit about orbital motion. Ah, the REAL way to a man's heart.

The thing is though, I'm not sure we really enjoyed the PROCESS the first time around. We were so clueless and so many things happened so fast that we just ended up fighting over stupid things and almost ruining everything. Gabe felt some weird pressure about how to be the right kind of husband, I wasn't sure how to be a wife, and we were dramatic and ridiculous (more him than me--that's just the truth). Our wedding was great, our kids are great, but I think we felt like we were in a whirlwind and so there was the DRAMA.

And then...there was the REAL drama. You know, the cancer. The cancer that CAME BACK.

There was death, looking right at us, lingering in the corner right next to life. And there it was...AGAIN. So many things have happened. And yet somehow, through all of that, the initial drama, the kids, the cancer...it's like we've been on a really, really long date for the past 11 years.

All that stuff people say happens when you've been together a long time? It hasn't happened. It's not like 6 years in, I figured out he could be annoying. I knew that shit immediately. It's not like we stopped going on awesome and epic dates, because our awesome and epic dates look almost the same as they did when we met. We used to bundle up and go on walks to the park to play catch with a football in the snow AS A DATE. The guy took me to a drag queen show on our third date and we went bowling and to high school football games and...yeah. the same. We still have sex every day. That whole part where he starts to ignore you or neglect you? Huh? Are there other people who aren't married to eternal adolescents? OK, well, not in this house. I mean, the guy was all excited and giddy yesterday and he still is, and he is all "I am so excited! I can't believe it! We're getting married." I don't have the heart to tell him we've already BEEN married for more than 9 years. At dinner last night, he told me that with a few exceptions--cancer and some drama he had caused himself by being particularly stupid--this, what we have, is all he ever wanted.

And while everyone knows that I will never say that cancer brings people closer together, in some ways, it has. We don't love each other more because of cancer; we love each other more because we have seen each other at pretty much the absolute worst and here we are, both still around. We have learned to appreciate the huge differences between us. I mean, someone has to be emotional, someone has to cry, someone has to be nurturing, and it sure as hell ain't me, babe. Someone has to be a stubborn, manic badass, right? Can I take that role? Thanks. Also, there is this. And by this I mean THIS. Blogging has enabled me to say things to my sentimental, always complimentary and sappy and cheesy husband that I would never say out loud, not because I don't love him, but because that's how I am and how I have always been. I know he appreciates that, and it's good for me to give that to him without having to change myself. Plus, now I know he's attracted to me even if I'm bald or my breast has been cut off. And we both roll our eyes at some of the stuff that made us annoyed with each other before, and we roll our eyes at other people's weird drama as well, because at some point down the line, SHIT GOT REAL, and we stopped inventing problems.

So, we're having some real fun with it this time around. I'm going to wear an actual white dress, maybe two of them. He's going to get a tux this time (I've never seen him in one!). We're doing this whole shindig at our house, and we will probably order fried chicken from the grocery store, buy a sheetcake from Costco, and walk down either the hill if it's nice out or the stairs in the house if it's not, together, to the orchestral version of the Buffy the Vampire theme song once again, and we are doing this all on the 30th anniversary of the day I got hit by a car and lost the ability to walk, so it will be ALL US. And our kids. 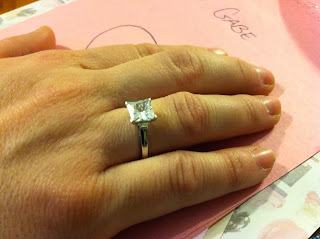 I picked out a few rings online that looked kind of engagement-like; this is hard, since I hate the diamond industry. So I showed these to Gabe--because he said at the very beginning of this whole thing that we can't get married again because he hadn't proposed to me (again) yet. At some point he apparently picked a ring and ordered it--a white sapphire. He made plans for us to see the Joffrey Ballet on Valentine's Day. I had a sneaking suspicion he might propose to me then (ten years ago, he proposed the week before Valentine's Day because he thought that would be too "typical." See what I mean? We were taking ourselves WAY too seriously). I got him a Valentine's Day card that involved sharks eating people and laid out the card for him at the breakfast table, with the kids' cards too. 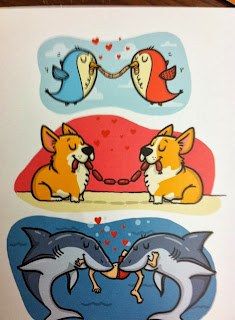 Everyone else opened everything, and I thought I was getting nothing. We were eating cereal, all of us in our bathrobes. Gabe whispered to Lenny and she went running downstairs to the basement. She came back with a big pink construction paper envelope. Inside was the construction paper card Gabe made me, next to a construction paper package. I opened it, and there was a ring inside. Gabe was down on one knee and he was crying. He looked like he wanted to say something and didn't know how. And then he said "Kate, you're the most amazing woman I've ever met. Will you marry me?" The kids sat there looking both excited and dumbfounded at the same time. I laughed and said yes. And then I read the card. It was signed

"Love, Gabe. Your once, current, and future husband."

We will see some of you on October 11. Be ready. 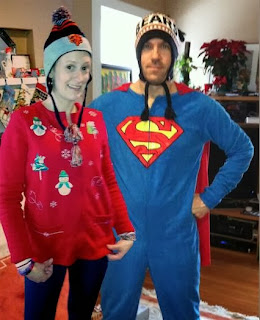