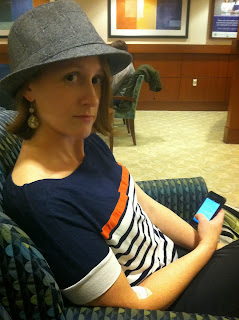 When I was 9 years old, I had night terrors. Night terrors are a strange beast. You become terrified of going to sleep, but you can't remember anything that happened in the night. You have nightmares but you don't realize it. I was told to keep a "sleep journal" and write about my dreams the moment I woke up, but that was a losing proposition. I couldn't remember anything. I drove the rest of my family nuts--I would scream and cry rather than sleep. My dad often slept in a chair in my room. I hated the thought of being alone in the dark. It wasn't just a problem for me, it was a problem for everyone else in the house. I went to therapy. It didn't work.

Nothing worked until one day, when I watched a movie on TV about a little girl who died from cystic fibrosis. And I screamed about how unfair that was, and how I could have died, how I almost died. And then I slept normally, having admitted to the fear that plagued me in the dark and in my dreams.

I wasn't being dramatic. I actually almost died when I was 9 years old, after having been hit by a car. I needed to articulate that knowledge, and no one could get it out of me. I just needed to work through it, to accept the universality of mortality, at a time when most children believed that death was something that happened to other people, not to their loved ones, and definitely not to them.

Fast forward almost 30 years. My four and a half year old son is having night terrors. His manifest somewhat differently than mine; he sleepwalks at times, for example, which I never did. He will burst into our room, eyes wide open, and begin talking utter nonsense, or screaming, or both. He doesn't make any sense at all. The other day, he burst in and screamed, "MOM! NO!" Then he said, "DADDY! I NEED TO TELL MOM THAT THE OTHER TEAM IS GOING TO KICK A FIELD GOAL!" It might sound funny, but it wasn't. He proceeded to just scream and cry and we asked him what his dream was about and he just shook his head. He wasn't really conscious at all. He couldn't, or wouldn't, sleep until Gabe stayed in his room with him. The next morning, he had no memory of any of it. 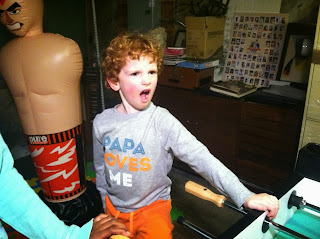 On the one hand, I could be concerned about night terrors because of what they could represent. Night terrors are a symptom of epilepsy, which I had from ages 6-8 and 11-17 (I was "cured," then it came back; I had no seizures after age 12 so either the medicine worked completely or I was "cured" much earlier than 17). We have epilepsy on both sides of my family. However--having had the condition myself, I know what to look for, and I have seen no other signs of epilepsy in my son. After all, I had epilepsy at age 9, but my night terrors were completely unrelated.

Gabe and I realized something last week, and it all began to make sense.

My son has night terrors only sporadically. Specifically, he has them on days when I have chemo, or the day immediately thereafter.

We have had him in therapy, to deal with things related to my cancer but also just so he can learn to calm down and not act so insane half the time. But it is hard to get a four year old to talk about death. It is hard to get a 40 year old to talk about it, for that matter. It's even harder to get him to talk about something that isn't tangible--I am not dying right now, I am healthy much of the time, I only take to bed or am too nauseous to be functional for a handful of days a month. True, sometimes I fall asleep in the middle of the day on the weekends, or take to bed when my kids do. But a parent does not have to be obviously ill for her children to understand the thing that parents spend time trying to hide from their children.

When my daughter was my son's age, and I had cancer the first time, she coped by talking about it. She gave little preschool chemo tutorials to her friends. She counted and kept track of my radiation treatments. If we kept anything from her, any information about what was happening, she got upset. She only had trouble sleeping at the beginning, when we didn't know what to say to her and doctors and others encouraged us not to tell her (that was really, really terrible advice) and we would say things like "Daddy and I are going to a meeting together" when we were on the way to meet with the surgeon, and she would cross her arms and glare at us and say "You guys don't even work together." So, I just laid it all out for her, and she coped just fine.

It is different with my son. My cancer is different, and his experience is different. He doesn't remember a time when he had a mom who hadn't had cancer. On the one hand, this is normal. On the other, he knows what it means and what it represents. He knows I could die. And who are we to tell him otherwise? This is the child who says to his father, and not to me, for reasons that seem obvious, "Dad, I wish I didn't ever have to die." He hates it when we, his parents, have birthdays, because he sees it as us getting older and that much closer to death. And didn't Dr. Spock say that children can forgive their parents for everything short of dying? What can we say, what magic can we impart to ease his mind?

There is little we can do. I was nauseous and exhausted and had been lying in bed since 5 pm after chemo, but he just couldn't calm down, my husband's words weren't working, so I stumbled into his room and gave him his stuffed animals and told him all that I could tell him: "You are fine. We are all fine. We are all safe in our house, and you are in your cozy bed with your cozy guys and blankets. Nothing is going to happen to you tonight. Not tonight, not right now. We will all wake up in the morning." And he calmed down, but not entirely, so Gabe slept in his room until he awoke and came back to bed with me, and everything was all right for a few cold, moonlit hours, and it was enough, at least for a time. 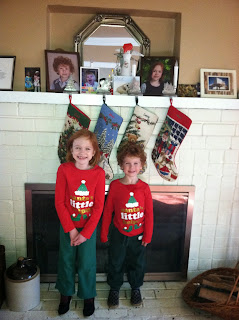