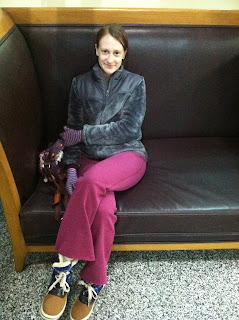 (Here I am in the parking garage afterwards, on this swanky Palmer House bench.)

Some people know what has been going on with me for the last ten days, and some people don't. The easiest way to explain it is here. This might be TMI, but I don't think so; so much of what happens with cancer, and with breast cancer especially, falls under the category of TMI for our squeamish society.

The day before my last chemo treatment, I got my period. Normally, that would be cause for celebration; it would mean that this chemo has not thrust me into menopause, at least not now, not yet. But this was a different kind of period than any I've ever had since age 11, and I had some hella heavy periods in my teens. I immediately felt like I had wet my pants. There was a ton of blood--I mean a TON. Fast forward ten days. As of this morning I was still bleeding insanely, with huge clots passing all the time; I could feel them leaving my body. I ruined a pair of pants and some sheets yesterday. This situation has led to me being slightly anemic; not so anemic that I could not do chemotherapy, but anemic enough that if it kept up for the next two weeks, the whole regimen would probably be put off--and I only have two more to go. I was supposed to be done with chemo after infusions on January 2 and 9, so having this happen now seems like a lot of bullshit.

Ah, but isn't everything with this?

So, I had to go in for a D&C today. I have had so many medical procedures in my life that I was not worried about the procedure itself, but I was immensely angry that chemo had led me to this place. I was pretty sure it was chemo jacking up my hormones, but it was hard to say.

Before I go on, I have to tell you about some other things that were going through my mind. Having cancer means having abnormal conversations and concerns. I am not a normal woman with heavy bleeding. I am a woman who should have been fine on two previous occasions, who was told this was probably nothing, and then I found out what should have been nothing was a very aggressive form of cancer. So. In my house, conversations like this take place, because in all honesty stranger things have happened:

K: OK honey I have to say this. What if I'm pregnant, and I'm losing the baby?

G: Um, what? I had a vasectomy, remember? Is there something you're not telling me?

K: Yeah right. I've had so much time, energy, and motivation to step out on you recently. Maybe it reversed, maybe it didn't work. You know what that would mean?

G: I'd have a reason to be pretty pissed off?

K: That and, well, it would mean...that chemo killed the baby.

And then there is this.

In addition to bleeding, I have gained weight on chemo; about 5 or 6 pounds, regardless of how much I work out. I have felt bloated. In the past few days, I have had abdominal pain. All of these are signs of ovarian cancer; having breast cancer, regardless of my BRCA status, puts me at a higher risk for ovarian cancer.

So my gynecologist said he would do an ultrasound with the D&C that was recommended for me, so he could show me that my ovaries were normal.

And today, I had that ultrasound. I was furiously bleeding all over the exam room, to the point where my doctor said "holy shit!" and started to mop up. Then he did the internal ultrasound, which showed...that my ovaries are not normal. I have what three doctors assume to be hemorragic cysts, or blood clots in the ovaries. They are two inch, shadowy masses. They do not look like the circular tumors I have seen (four of them, people) in my breast via ultrasound. The last tumor, the one that marked this recurrence, was kind of shadowy as well as it sat right by my scar tissue. So I did not feel altogether reassured, especially since they are recommending a complete diagnostic ultrasound in 4 to 6 weeks. My gyne tried to convince me it is not ovarian cancer. But how well can that work at this point? I have been told it's not cancer before, and look what happened. Of course, ovarian cancer would be much more likely to kill me, so there's that.

I sat there feeling ambivalent as they prepared to do the D&C. And wow--that hurt like a bitch. At first, two doctors could get nothing through the suction pump. My endometrial lining is actually very thin and there were no clots there, leading them to believe that my uterus is actually fine, but that my hormones are so jacked that the bleeding is unrelated to anything stuck in the uterine lining. A third doctor, the D&C specialist I guess, came in and suctioned the hell out of me, until I was audibly cringing and clutching Gabe's hand, which is rare for me. He got maybe a third of a specimen cup of tissue and blood.

This may sound strange, but boy was that disappointing. I was hoping they would just scrape everything out and I'd be clean and stop bleeding. I was hoping not to see the look on the other doctors' faces when they said, oh ok breast cancer, it's hormone positive I assume? And I said no, it's triple negative. Their eyes involuntarily widened. They were afraid for me and I could see it, no matter how they tried to hide it. And then they suggested I go on progesterone for a few weeks if my oncologist ok'd it, which I said I didn't want to do unless the bleeding was completely out of control. And then they left, and my gyne told me to just lie there for a bit.

We waited. And waited. And finally a nurse came in and told me to get dressed, and we went to talk to the doctor in his office.

He kept telling me they were cysts, that they would go away, that I did not have ovarian cancer. He saw the look on my face. He said, "you have a terrible disease and the chemo is affecting all parts of your body. I'm sorry you have to go through this again. I'm sorry about your kids. You will follow up with this ultrasound and it will be fine. I'll call the oncologist, we'll make a game plan. You just take care of yourself, take it easy."

And I looked at him and just kind of mumbled that I always do take care of myself, but I am tired of this, I am tired of cancer, I just want to be done with it.

We got up to leave. He shook Gabe's hand (he had said a bunch of hilarious things to him in the exam room, including the fact that he shouldn't act like a jerk because I look pretty good and I could easily replace him), and he told him to take care of me, and Gabe said he always did. Then he hugged me with that big, crushing bear hug. He called me sweetie and said I should hang in there. And then he grabbed my face with both of his hands and looked me right in the eye.

And he said "I mean it. Hang in there." He looked at Gabe and said "I love this girl." And then he walked away.
Posted by Katy Jacob at 2:07 PM