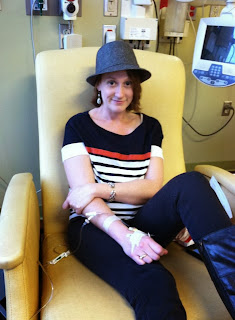 I've noticed on various social media sites that people have been writing about what they are thankful for this month. I'm thankful for many things, but I am especially thankful for all of the people who don't tell me how I should behave, who don't question the "decisions" I've made through two bouts of cancer under age 40, who don't make me feel like this whole mess is all my fault.

I say this because there are a lot of people out there like this, who say unfeeling things, terrible things really, out of what I can only assume is their own fear. People tell you that you should have done things differently, that you could have avoided cancer if you had been skinnier (size 0, anyone?), if you ate better (better than home cooked meals every day?), if you exercised more (more than 2-3 hours every day?), if you were happier, funnier, if you danced more, if you went to church, if you had never had a drink or a smoke or sex with someone you weren't married to, if you had only been different from yourself, then cancer would have left you alone. They tell you that chemo is stupid, that the power of your mind will erase your cancer, that kale will save you, that you have the ability to will your cells into cooperation. They say these things because of their own fear, their fear of YOU, and what you represent. You represent the thing that could happen to them, no matter what they do. You represent the person who is healthy, yet not healthy. The person who looks younger than she is by years, though her body has been made older than she is by more years than that. You represent the person who was supposed to win, and lost.

So I am thankful for all the people who have let me be myself, and who don't try to erase the difficult parts of what that means. Because what we all do--all of those of us who have had something like cancer, or a terrible accident, befall us, is this: we live with dying.

We live with not just the thought of it, the esoteric sense of the fact that none of us is getting out of here alive, but with the reality of it.

We go to chemo, and we sit in chairs next to women who are dying of the same disease we have had, that disease that has refused to leave some of us alone, for years--since 2006 probably, that neither chemo nor radiation nor surgery nor exercise nor awesomeness could cure. And we know that we can't use the specter of those skeletal women, who are cold, and alone, and resigned, and amazing, to make this be about us. The fact of those women dying is not about me and what I fear for myself. They are entitled to their own dying, as it is, on their own terms. But this is what we do. We make friends with women who have the same disease we have, and some of those women die. They do not die beautifully or admirably. They die, and it's ugly and painful and it's not fair and they leave legions of people reeling in their wake. And we live knowing that might be us--almost expecting that it will be, actually. I try to look into my future, imagine my old age, and I cannot do it. I think about my surgeon looking happily at my reconstructed "breast," and telling me it looks wonderful, and that when I'm 80 I will have one perky breast and one that sags halfway down my chest. I see the look in her eyes when she says "when you're 80" and I know she says that to comfort me because we both know there's a high chance that will never come to pass. I live with this every day, all the time, this knowledge that my exit might be premature. I also live with the knowledge of what might come to pass before that exit is made--and it's not pretty, folks.

This acknowledgment does not mean I am depressed, or negative, or that I have the wrong attitude. I have the right attitude for the circumstances. I know how to live with the notion of dying, and I know how not to avoid people who are dying, even if they remind me of the self I hope I never have to witness. I could take myself out of painful circumstances, I could avoid getting to know terminally ill women with breast cancer, but then what would that prove? Would I want people to do that to me, just because I was going to die and it was hard for them to accept it? No, I would not. It bothers me that this has happened to me already--I have lost friends, been isolated from people, learned to focus on my little family and my close inner circle of friends, because people live in fear of me and what I represent. They have left me, ignored me, passed me by. I do not dwell on it, but I know better than to become one of those people myself.

It might be hard to have body parts amputated and to poison yourself, but it is harder still to live with what those things represent. And so it is that as we live with the certainty of death, and the possibility of death coming too soon, there are those of us who say this: It's coming, and it might be just around the corner for all I know, but it's not here yet. I'm still here, still alive, still young, still me, and I'm not dead yet. Not yet.
Posted by Katy Jacob at 5:58 PM