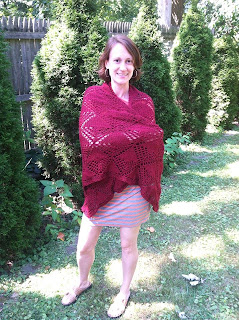 Anyone who has read this blog has seen the "about me" section wherein I say that I "spend a decent amount of time hoping to make it to 40."

Well, I can say officially that I've made it to 38. At 34, I wasn't so sure about that one. On my 35th birthday, I had just finished my final round of AC chemo and I was bald and skinny and in the beginning stage of menopause and it sucked but it didn't, because it was just this situation involving suffering and fear, but sometimes life is like that. Back then, I didn't know what lay ahead, but I sure as hell hoped it wouldn't be this.

However, this blog stands as a testament to the fact that I have always known that it could be this. And it could be worse. I never celebrated a single cancer-related milestone without feeling suspicious and ambivalent about it, which should not take away from the feelings of elation when I was (falsely) declared NED. After all, if a tree falls in the forest and no one is there to hear it fall, what really happened? If you have cancer in your body and no one can see it, no one can find it, does it matter that it's there?

I haven't written about chemo, I realize. I'm not that interested in writing about it. I have finished one complete round of it, two infusions a week apart. The first time I felt like I had a terrible hangover for at least three days. This time, I told the nurse to cut down on the Zofran (anti nausea med given via IV pre chemo) as I thought that was half my problem. She halved the dosage and I felt more nauseous yesterday, but much better today; no headache, no haziness. Both times I have lost two or three pounds in one or two days, more from dehydration/lack of appetite than from actual sickness. All of it has been doable.

Yesterday, my mom and a close friend from high school sat through chemo with me, and I had these moments of intense nervousness. I had my blood drawn to see if my numbers were well enough to receive treatment, and then I was sent to the chemo chair, and then I waited. And waited. And kept waiting. And I saw my chemo nurse speaking softly on the phone and looking concerned. I saw her get out a little box that I recognized so well--a Neulasta shot. And I thought, you've got to be kidding me. My numbers have already tanked. I'm not going to be able to do this. She doesn't know how to tell me. And also, oh God, what have I done?

It turned out that a machine broke and they had to send my bloodwork to some other lab and it took a while. My numbers were "perfect," according to the nurse. I asked for a printout, as I always did before, so I could see for myself. I told her I saw the Neulasta and thought it was for me and she laughed hysterically. I also told her that I had been convinced that I had mouth sores already because my mouth was killing me and I couldn't eat and everything was all chewed up and then...it cleared up and I realized I had just burned my mouth on some artichoke dip like a normal person. We all sat there joking and telling stories. Somehow my friend and I got in this conversation about being part of the AIDS generation and that didn't even seem weird or out of place. 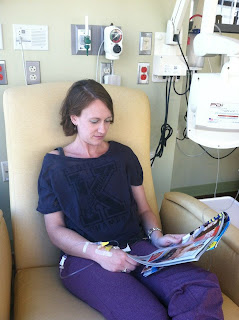 My mom drove me home and made biscuits. My husband and kids walked in the door and my son continued to act like a little crazy person and get in trouble every five minutes. Then he calmed down and we sent him to our bedroom to watch a Rudolph the Red Nosed Reindeer movie, while my daughter read quietly in her room and Gabe cleaned up after their dinner. And I got really, really tired, all of a sudden. So I brushed my teeth with chemo-lady toothpaste and used chemo-lady mouthwash and laid down in bed with my son. He said "you can lay here mom, I don't care." I put my arm around him while he finished the movie. I was asleep by 9 PM.

Today I have done a lot of nothing. I'm taking advantage of this, because next time I do chemo I will have just started my new job, and I won't be able to just do nothing the next day. I do not feel sad, or upset or depressed or fatalistic or anything. I also do not feel assured of kicking cancer's ass or anything like that. This just is what it is. I've spent two birthdays in my 30s doing this. This time, it's a lot more manageable, both physically (especially after my 6 sessions of physical therapy! that scar tissue breaking up stuff is a Godsend) and mentally.

This recurrence has hit other people harder than it has hit me. My mom feels this way. She tells me over and again that she doesn't know how I do this, how I will do this and live with the unknown for the next year or years or whatever it is. And I say that I have done it before, and so it's not so hard now. There is one way to explain this--let me try.

It is hard to imagine, unless you have been there yourself, how it feels to be grateful to be healthy enough to receive chemotherapy. The wait to get your numbers is nerve-wracking. On the one hand, that is because you want to get this shit over with, but on the other, it is because those numbers are real and stand for things that are important. The knowledge that you could feel absolutely fine, save the side effects of chemo, and yet your white blood cell count or something else is putting you one foot into the grave, is a very, very scary thing. It reminds you that so much of what happens in your body is unseen and out of your control. It reminds you of cancer. So if the numbers are bad, it is completely devastating. And if they are good, you feel oddly triumphant, as I did yesterday, especially because I did not take one iota of post-chemo medication. You give yourself credit for something that you shouldn't give yourself credit for, because there's not much else you can claim.

And that's how I deal with cancer, and all the unknowns, especially now. I just know that something could be happening that I cannot see, and I choose to look at something else. I choose to claim other triumphs. And then, there is my secret, that weapon I have.

I have cancer. I'm the one who has had three breast surgeries, 2 months of radiation, and will have done 20 infusions of chemo over 10 months when all is said and done. I have experienced the side effects, including the long term ones. I'm the one who might not live to see my kids grow up, I'm the one who is standing here with a gun at my head wondering if it's going to go off when I least expect it. So of course it is me that has physically experienced cancer. But in my life? I hardly experience cancer at all.

This is where I do cancer.

That's the title of the thing, right? KatyDid Cancer. Not KatyDidMotherhood or KatyDidWork or KatydidSex or KatydidLife. I put cancer in its place here, so that I can go into my life and just do something else.

Cancer is a part of things over here. It's a big part and it's not. We don't talk about it that much, not really. The other night Gabe and I were driving north to go out to dinner before a Cubs game. I got quiet and pensive for a minute, after almost nonstop talking about stuff which is my normal M.O. He asked me in an almost fearful voice what I was thinking about. I looked at him and said,

"What's your favorite Chicago street name? I think mine is South Water. Because there is no North Water." And he smiled at me and thought about it for a minute and kept driving. 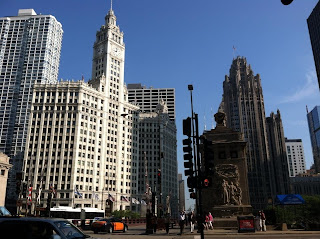