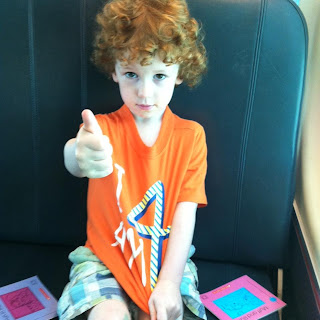 When you dream, what do you dream about?

Normally, my answer to this question is almost absurdly pedestrian. I dream about things like getting up and eating breakfast in the morning. I’ve always figured that I do enough daydreaming during the day that my subconscious feels satisfied by the time my crazy manic body finally falls asleep for that five hours each night.

But then something like this happens, and even your dreams change.

Last night I had what will probably be my last drink for the next six months—my favorite, Katy-recipe gin toddy. Gabe and I had some fun together, and then I fell asleep quickly, without even having to read or watch TV to distract myself. I was even able to sleep for a few minutes on my preferred left side, in spite of how alien this implant feels to me, what with the port (it’s an “adjustable” implant so they can pump saline in or out of it without having to do surgery) sticking up out of my skin. As usual, I woke up every 90 minutes or so, and at one point I woke up with a start, shocked by what had just happened, wondering whether or not it was real.

I dreamt that my son had impregnated his college girlfriend.

This dream was a very Katy-style dream, in many ways. It absolutely could have been a scene from an actual life; there was nothing surreal about it. And in the dream, Augie was talking to me. It was as if he was sitting in front of a video camera, but the camera was actually me, and I could not see myself. He was 19 years old. Of course, he didn’t say that to me, because who walks around saying, hey, I’m 19 years old? But I knew that he was that age. He was saying that he was sorry this happened but it was an accident. He paused and said he wasn’t really sorry, because he had loved Keisha ever since the fifth grade. And though he did not describe it, suddenly these images flashed in front of the “camera” in my dream, of these two kids going to grade school together and then going to different high schools and then finally going to their senior prom together and dating after all that time and ending up at the same college. And I said nothing to him, though I was thinking that I wasn’t sorry either.

He said that he would figure it out, figure out what to do, and that he would get a job and finish school and everything would be fine. And then he walked away, all six feet of him and wild red hair.

And I woke up with a start, not sure whether to laugh or cry. I mean, this could absolutely happen with Augie. The real issue might be getting him to college first. This dream must seem so obvious, I know. I am dreaming that I will live to see my kids grow up and take care of themselves, that I will live to have grandchildren. But that is not exactly what it means. 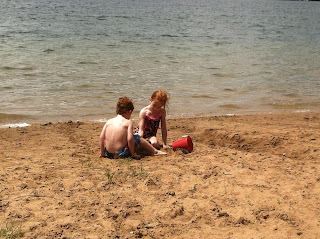 When I woke, I began to think about Gabe’s grandmother, who raised him for the first six years of his life. When we met, Gabe was living with her, helping to care for her; she had Parkinson’s and had been in a car accident as well. She died less than a week before I finished cancer treatment the first time. She lived to see both of her great-grandchildren be born. When we would visit towards the end of her life, in the house she had lived in for decades which was covered with photographs of Gabe as a child, she had begun to have dementia. She would talk about people who were dead, people she hadn’t seen in years and years, as if they were right there in the room. I knew enough of this type of thing to do what needed to be done, and I would just talk to her about them, and ask questions about what they were doing. One day while Gabe and the kids were somewhere else in the house, she stopped in the middle of one of these tales and grabbed my arm. I still had hair at that time, so it must have been right before my diagnosis. She looked at me and said “I’m glad he found you. Now you can take care of him.” 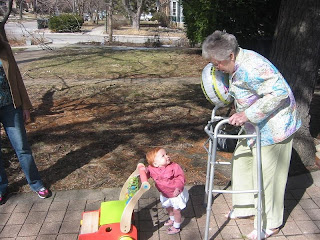 Of course, he can take care of himself, but that’s not the point. He was still five years old to her. After she died and we bought this house, we inherited some of her dining room furniture. Gabe, who is always so sentimental, cried, and said how pleased his grandmother would be to see her furniture there, in this house on her favorite street in the neighborhood she had always admired. He said that he wasn’t sure there was anything else left to achieve from that perspective; he had done everything she would have wanted him to do.

That’s what I was dreaming about—not witnessing my children’s futures, but imagining that I have already lived long enough to see the seeds of those futures, and that I have had time to tell them what I wish for them. My kids are so young that it is likely that everything that is happening with them right now will be forgotten, at least by them. I have been through too much to imagine living to meet my son’s college girlfriend if he had just met her (notice I was not technically in the dream; all parents know that their children can always speak to them, even if they are dead). I was dreaming of a scenario in which I could have possibly already met her, because he fell in love with her when he was 10, and probably met her when he was 5, and I could feasibly live that long.

Oh, what a selfish beast love is.

We want so badly to believe that we will take part in some of this, that our lives will intersect with the lives of the people we love so fiercely, that we will be able to bear witness.

My son is 4 years old. He is not old enough for me to voice my dreams for him in any way that he could or should be able to understand, even when those dreams are strange and imperfect and take into account his irrepressible personality that is both his greatest strength and the thing that keeps us up at night wondering what the hell to do. My job now is not to be some deep cancer-mother telling him about life and the future, though he will bring up the subject of death at the dinner table as casually as other children ask for more milk. My job now is to tell him to calm down and to put his own damn socks on and to try and read a few of those words because I know he can do it. 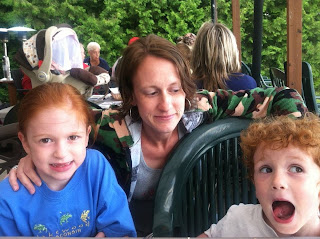 Sometimes, that is what you dream about—not that you will live to sit back comfortably with the knowledge that everyone is grown and fine, but rather that you will live long enough to be able to tell people what you dream of, and that years later when important things happen in their lives, they will remember. And they will be able to say, look mom, everything is going to be fine. Even if you aren’t here.
Posted by Katy Jacob at 9:32 AM