Day 915: The Ghost of Christmas Yet to Come 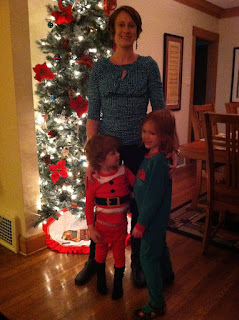 Our Christmases look much like the Christmases of other young families in places like Chicago at the front end of the 21st century. We bake cookies. We try our damndest to encourage our kids to believe in Santa, in magic, and we get teary-eyed when they explain, using their wonderful childlike logic, why they do believe in things that seem impossible. We attend adorable holiday performances at preschool and elementary school, even arriving extra early to get a front row seat so we can take a video of our daughter shouting out her lines in her coveted role as an elf, recording for posterity her pride in being one of only three first graders awarded a speaking part. We buy too many presents for our kids. We tell them to listen for hooves and sleighbells on the roof, and remind them that Santa won't arrive until they are asleep. We change our handwriting and choose different wrapping paper for the presents from non-magical adults. We, my husband and I, have been together almost ten years and yet we don't really know what presents to bestow on each other, so I buy him clothes, which he doesn't want but always likes, and he buys me jewelry, which is always different than what I would buy myself but looks like me all the same. We throw a big party. We drink a little too much. We bring our families, strange as they are, together. We take time off of work. We love each other.

And so it goes. Like all parents, witnessing Christmas through our children's eyes reminds us of our own years when we were caught up in the magic on the other side, happy to be on the receiving end of all the efforts that adults put into making us smile. Like all couples who have children together, but who at one point did not, we remember the holidays that we spent when we were younger and newly in love. We remember our first Christmas in our first house together. We think about the first Christmas that we had as a family, our family, the one we made, as a choice. And I at least think about my youngest child's first Christmas, which was the last one he had with parents who still believed that the world was offering our beautiful little family a long and unopened gift that just couldn't possibly end.

I spent today, and most of the last month or so, very much wrapped up in the joy and stress and reality of this Christmas, this present-day, 2012 Christmas. 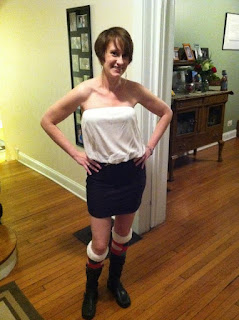 And perhaps we are not that different than other couples in this, in what I am about to say. Perhaps I should not speak for my husband, who might not feel this way at all. But I have these moments, these moments of clarity both large and small, where I am reminded of the Christmases yet to come, including the ones that I will never see. It's that glimpse of the void that is part of what makes us all human, but it is something else too, something less dramatic, more practical, really.

It doesn't happen often, but I think about holidays, seasons, life events that might happen in my absence. I don't do this out of self-pity or in order to bring some kind of dramatic flair to my life, but rather because I've been put in a position to think about it.

During our holiday party, we were happy that of the 50 or so guests, our kids' best friends were able to attend. Lenny has had a best friend since age 2, and Augie since 7 months. I never believed that children that young could make such meaningful bonds until I witnessed it for myself. Those bonds have lasted through different schools and now even different towns. And as Augie's buddy was leaving, we decided to take a few pictures of them. The photos of them are usually just blurs of little boys making superhero poses...but not all of them, not this time. 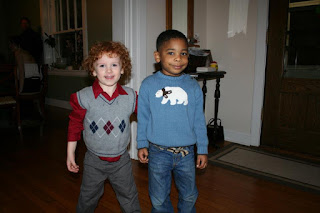 When I saw this picture, with the two of them looking like pint-sized frat boys, I had to turn away and shut my eyes so that no one could see my tears. For the first time ever, I could imagine what my son would look like as an older child, a teenager, even a man. In absence of the three year old voice, the goofy mannerisms and outlandish behavior, I could see him, as he will be someday, this good looking little boy of mine.

And it brought me back to all those days in 2011, when just the sight of boys--teenagers especially, but even older children--would make me wistful with that strange, reverse nostalgia that comes from something like cancer. I used to wonder, what would it be like if he was taller than me? If he had a deep voice? If he was embarrassed to be seen with me? If he began to date girls just like me or the opposite of me?

And will I live to see any of that?

Of course, none of us knows what we will live to see. I have lived to see more in the last two and a half years than many women diagnosed with triple negative breast cancer. I have seen a lot more than a lot of people who are no longer here for one reason or another.

But I still think about it. And while it makes me wistful, and somewhat sad, to imagine the things I might miss, for the most part, the tears are not tears of sadness.

That belief is so strong that it enables us to invent magic. On some level, maybe we as parents need this Christmas type of magic to be real, so that we can convince ourselves that through some magical force, our children's lives will be beautiful and eternal, even here on Earth.

Like many parents, I gave a lot of thought to what I would tell my daughter if she asked me about certain recent events that took place in a first grade classroom.

My daughter is in first grade.

Do you hear me?

My daughter is in first grade.

She has not asked me a thing, and I don't think she knows about it. I have no intention of telling her if she doesn't ask. But I did figure out what I would tell her if she wanted to talk about it:

Think of all the adults who have protected you all of your life. You have attended daycare since you were three months old, and every adult who has ever cared for you, and every teenager for that matter, has loved you. They would all protect you, no matter what. I don't have any idea why such horrible things happen. But I want you to understand something. Do you remember when I had cancer, which is obviously a bad thing? Do you remember how easily I talked to you about it, how I told you what would happen, and how we didn't keep things from you? Do you know why I was able to do that?

Because it was happening to me, not to you. And I could take it. I could stand it.

And I know, because she's my kid, that she would understand what I was trying to say.

And I know, I just know, that they will have a million more Christmases, whether I am here or not, and the magic it takes for me to believe that is the magic that Christmas is made of, and that is good enough for me.

Here's to a wonderful Christmas that was yet to come just a few short years ago, when it was hard to see, but it happened all the same. 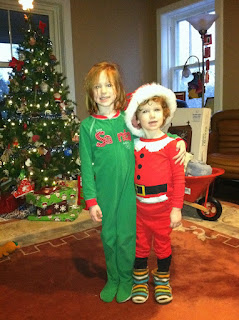