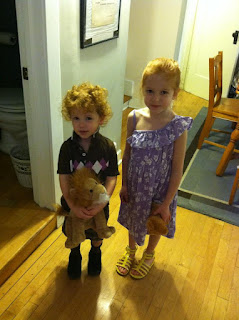 There was a time when the word "milestone" had a very specific and even ominous meaning for me. A few years ago, I used that word to refer to various types of cancer treatment, surgery, or cancer-related anniversaries. It's supposed to be a "milestone" when you finish surgery (more like a bump in the miles-long road, considering how many of us need to go right back and do that shit again), when you start chemo, change chemo, end chemo, finish burning yourself, grow your hair back, or whatever. I'm not sure any of that is really true, now that I'm not in the middle of it. Those were big things, but they also represented mostly sad things, and milestones don't need to be as such, even for people with cancer or other illnesses or disabilities. While the rest of my life absolutely continued while I was in active cancer treatment, no one outside of my innermost circle seemed to take note of the normal, every day milestones (save my birthdays, which were celebrated in large fashion, mostly because they signified that, well, I wasn't dead). It's worth noting how things continue to change and progress no matter what else is happening.

So today I wanted to give a shout out to some of the happier, more pedestrian milestones we've experienced over at my house recently:

Lenny, who incidentally recently turned six, got into an excellent gifted magnet school in the Chicago Public School system. At first I felt ambivalent about this, as my innate personality bristles at the intense separation and tracking we've instituted amongst children at such young ages. Then I thought...wait a second. There are only 30 kids in the city accepted into this school. If she can cut it through eighth grade, she is almost guaranteed a spot in a selective enrollment high school in 8 years (if those still exist). That saves us 12 years of tuition (a damn good thing if you own two houses). It also means that if Augie doesn't get into a magnet school for grades 1-8 (which is fine, because the local public school is good as well), all the tuition we've saved for her for 12 years and him for 8 years would enable us to send him to private high school if it came to that. Thanks, Lenny! You're better than the IRS at tax refund time!

Not to be outdone, on the same day that Lenny received her acceptance letter for this school, Augie up and decided to potty train himself. He had been doing well with wearing underwear, until it came time to poop, and he just wouldn't do it without a diaper. Then he changed his mind, and just like that, he was done. We can now officially retire the diaper bag. Now, I've never been a huge advocate of worrying about potty training in general. You don't see many ten year olds wandering around wearing diapers, so why argue with some stubborn little monster? The kid can barely sit still or contain himself for any reason. Why would I fight him about that? My mom tells me I just used to fly through the room all my life as a child, like a tiny little blur, and she didn't see the point in trying to make me sit still to use the bathroom or do anything else.

Now that my son has reached this milestone, I find the conversations strangely unnerving: "Look mom! I fit my penis in my underwear!" Or, peering in the toilet, he decides what kind of animal that shape looks like. Or, I give him a Snow White doll as his present for this achievement, and before he asks if he can sleep with her and takes all of her clothes off (she is, he decided, 20 years old, so I guess I can be glad he isn't interested in someone underage), he looks simultaneously happy and disappointed when he says: "That's Snow White. The Doll."

Jesus, mom, didn't I tell you I wanted Snow White? The GIRL? Like when I said I wanted a mountain from Santa, I wasn't talking about a toy mountain, woman.

I can't say I've had any milestones recently, really. What I see as an achievement might seem ridiculous to everyone else. For example, I made an appointment at the gym to have my measurements and body fat percentage assessed last week, and I was pleasantly surprised by the results. My weight and BMI are the same as 9 months ago, but I've reduced my body fat percentage to 17.2% down from 17.9%, and most of my other measurements have gotten smaller, with one notable exception. My thighs are an inch and a third bigger. Holy quads, Batman! No wonder I've had to buy new shorts.

Speaking of spinning, we had a huge milestone when Gabe accompanied me to the gym for a few classes on the bike. Gabe! In a gym with other people! Not just trying to do three pushups with me lying on his back (those Katy-ups are actually pretty impressive) or doing pullups on the monkeybars in the park. Those were some moments of joyous, ok not really, but at least sweaty and contentious, bonding. The consensus was that he hated it, and he wants to box instead, but he gained some appreciation for why I love it, and now he knows how fast I can sprint.

What else? Well, against all breast cancer advice, I've become one of those people with a signature winter and summer drink. Thus, I have just finished off my first enormous bottle of Tanqueray. By myself. It took me a while, but still. I was never much of a drinker before, and I don't think my nightcap ritual puts me in that category, but at some point I guess I figured, what's the use of trying?

Gabe and I are quietly approaching the 9th anniversary of our first date, so there's another milestone. Soon we'll celebrate a bunch of birthdays: Augie's, Gabe's, mine even. I'm pretty sure I'll keep getting older for a while, even though the following things are also true:

When my kids hit these milestones, I feel the normal surge of parental pride and happiness. I also think to myself, thank God. Every time they achieve something, every time they move a little further into their own futures, I think: See, I was here for that. If things take a turn with this damn cancer, at least they got to that point. They will be educated. They will use the bathroom by themselves. They will develop their own taste in women, and in men. They don't need me. Other parents get wistful, or cry, or feel useless, in these situations. I think YES! THEY DON'T NEED ME! THEY'LL BE FINE! If I have to go, that is. Let's hope I don't.

My body itself feels like a milestone. There's so much I can't do, and I'm not saying that to be defeatist. I can't do high-impact sports because my hips never grew in normally after my car accident and I never had physical therapy. My left pec is permanently burned and I still have chronic pain in the breast/chest area that can be so bad I wince and tears come to my eyes, and it comes out of nowhere, when my thoughts are far away. I still have to ask them to adjust the light/fan combination at the gym to dilute the strobe effect so I don't have to worry about having seizures. When my back hurts, or I get a bad headache or I suddenly have to go to the bathroom all the time because I have a cold, I worry that my cancer has spread. I am already in the near-panic zone awaiting my next mammogram in a month. I am living in a perpetual state of bated breath, crossing my fingers and hoping hoping hoping to get to 2 years NED, something most moms my age don't think about on a daily basis.

When I go on business trips, I ask for the pat down at the airport, and I realize that I will have to do that for the rest of my life, to avoid the extra radiation from the full-body scanner. On those same business trips, I'm known to do weird things. When it's 75 degrees at 6 pm in Kansas City, I think it's a good time to put on my bikini and go to the outdoor pool. And then I swim. By myself. In the rain. I go inside when I hear thunder. Men look at me funny. I realize that someone with a seizure disorder history should never swim alone.

I realize it. I realize that it might seem like loss to some people, to think of things that I cannot or should not do. All I can think is, look! I'm 36! I've had kids, and cancer, and epilepsy and all kinds of other things. And the girl 15 years younger than me is reading my assessment results in the gym, and after announcing my body fat percentage she says to me, here's where you are, and she points.

To the line that says "athlete."

Wait, are you talking about ME? Athlete, my ass! That's not a real milestone, I realize. It's vanity more than anything. Unless you have lost the ability to do just about everything with your body that a body was meant to do: eat, sleep, walk, talk, have sex, sweat, cry. Then it is a milestone. It all is--this body, those kids not needing me, the calendar turning into another month or year. This life is a milestone, and all of that cancer stuff was just a part of it.
Posted by Katy Jacob at 4:09 PM