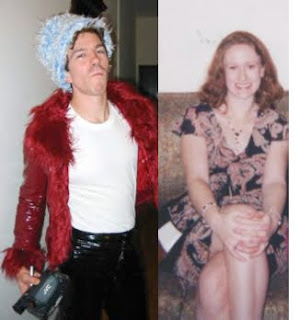 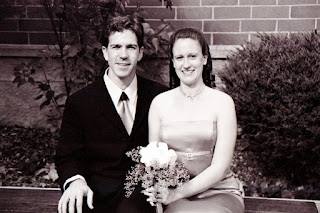 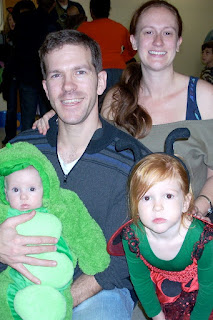 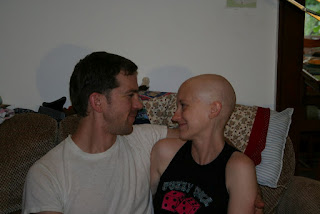 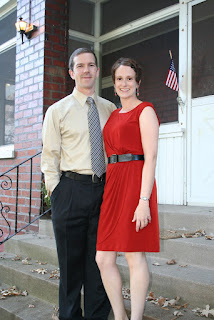 I haven't had too much to say about cancer lately.

Did you hear that? Can I get an Amen for that? YES!

OK sorry. I was just trying to explain why I hadn't written anything in a while. This might be short and sweet, but here goes:

Nine years ago today, I reluctantly went on a blind date. I was the first of my friends to try blind dating, and I say that rather than online dating, because I am actually old enough that my first blind dates involved ads. In the newspaper. The Reader, to be exact. I went out on a limb and responded to an ad, met the guy for lunch, and he was really cute and nice and smart and all that good stuff. We didn't start anything, but it gave me hope. I realized I was terrible at meeting people at bars or places like that, because, well, I don't like it when people hit on me in bars or places like that. I had a lot of male friends but didn't want to date any of them. And I worked full time and was in grad school full time, so I was busy. Blind dating worked well when it worked well: no one ever lied to me, and everyone followed my rules. No one questioned my insistence on meeting in public places in daylight, getting myself home, not giving out my phone number. I dated some great guys and had some serious relationships through this method.

But it got tiring. There was a lot of good dinner. A lot of realizing that there are all kinds of attractive, intelligent, funny people out there in the world you just don't give a shit about, and you don't know why. After one relationship ended kind of badly, I swore off dating and just decided to focus on all the other things I had going on in my life, which was a lot. Except my profile was still online, on salon.com, I believe it was. I had a damn good profile, if I do say so myself. I described myself pretty accurately. Most guys responded to the parts about liking sports or kung fu movies. When I met people in person, their eyes would glaze over when I told them what I did for a living. Most people can give one to two word answers to that question. What do you do? I'm a (insert): teacher. attorney. IT guy. Graphic designer. Salesman.

"Um, I do policy research and advocacy focused on financial services for lower-income populations."

How did I ever have a date in my life, again?

So on I went, and then one day a few weeks after I'd sworn not to date again, I got this one-sentence email via salon:

"So what's it like to work at a think tank?"

And I knew I had to respond to him, even if he was that weird guy I had passed over when I saw his profile posted, because he was dressed in drag and drinking what appeared to be a 40 but was really that girly Frambois beer. Pleather pants? WTF? Then, he agreed to meet me in my neighborhood at my favorite restaurant. He came to the date with strange floppy hair, arriving from another woman's house.

And now it's nine years later.

No, I didn't know it then. There wasn't an instant spark. We liked each other, were attracted to each other, and the conversation was easy. He made it clear that he liked me. He was cheesy. He offered to drive me to my car since it was raining and I let him because he seemed so harmless and then he attacked me. He did some stupid things, like not calling me the day after we slept together the first time. I called him instead, and told him he was an asshole. He was like, whoa, I thought I was supposed to wait! I said, what is your problem? This is not a movie. And he said:

"I wanted to call you as soon as I got back to my car after I left your place!"

You know, all that good stuff that happens when you're 27 and still clueless even though you shouldn't be anymore. Things moved fast. He told me he loved me two months after we met. He moved in with me after 8 months and proposed to me at 10 months. We got married a year and a half after we met, and had Lenny less than 3 years after our first date.

People ask me how I knew he was the One. I didn't, not at first. But I knew this: There was potential. When we were together, I could see it. What? Well, this. Not THIS, exactly, not the way it's all happened, but this:

Two kids who had a pretty rough time of it who grew up and found each other and built some kind of happy, boring life together. All because the guy liked smart girls (he said he had wanted to write me for a long time but was convinced a "girl like me," whatever that means, would never go out with him) and the girl liked guys who realized she was smart. And they both liked Mexican food.

Gabe once told me he knew I was the one "by the end of the guacamole." That's not really true, though. The real story is about six weeks into our relationship, when we went to Baraboo, WI, for his 28th birthday. I liked that he wasn't one of those guys who had a heart attack when I suggested we go away for a weekend together. We went to a B&B and swam, hiked, realized we could drive long distances and get lost together and laugh about it. We sat watching a beautiful sunset over Devil's Lake and it was honestly one of the best I've ever seen, as good as Hawaii. But I'm still me, I still had to geek out and say:

"Isn't it strange to think that while it looks like the sun is going down, it's really us spinning away from it?"

And Gabe said later he knew he would ask me to marry him right then, because I said the kind of nerdy shit he was thinking but was afraid to say out loud.

Nine years after that first date, I'm sorry to say it's been anything but boring. Damn, I wish it had been boring. That's just not in the cards for us. Some of our "excitement" has been his fault all the way, some of it has been mine (though more of it was his, right?), and some of it was just fate's fault. That guy who had a secret redhead fetish turned into the guy who could learn to have a bald fetish. The guy who took it in stride when I used to tell him to get over himself sure had to learn to do that. The guy who didn't want to have kids, but oh wait, would have kids with someone like me (he said that 2 weeks after we met) turned into a really great dad--the kind of dad who takes the kids to Halloween parties without his wife, because she is at pilates class, for instance. The guy who thought I looked perfect when we were 27 said the same thing when I was hugely pregnant, skinny as hell from chemo, and now, when I weigh about 10 pounds less than when we met. The guy who had watched too many bachelor movies and didn't call now hardly calls anyone but me, for better or worse.

So I'm glad I went on that date, no matter how much I wasn't looking forward to it.

And Gabe, you could probably still pull off those pleather pants. Glad I met you, babe. I hope we've got more sets of nine years.