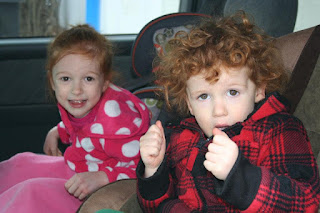 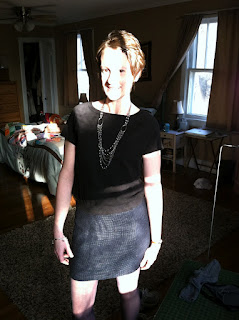 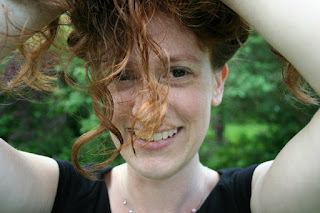 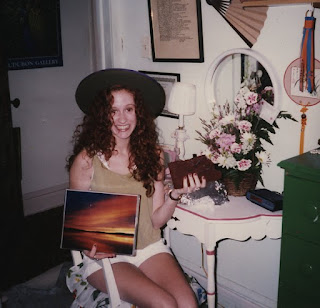 I think I am having a hair depression. I know, you’re thinking it’s been almost two years since I had long hair, and I should be over it by now. And I truly have brought this on myself, since after my first haircut almost 11 months ago, I’ve continued cutting it every 6 weeks ever since. If I hadn’t done that, I would have long(ish) hair again by now. But I still can’t get used to it—I still don’t think I look like myself, and I don’t care if it sounds vain or petty or irrelevant in light of other things. I still feel like someone else with this obnoxious hair.

Last night I was just disgusted by my unruly short hair. I was looking for an opinion from Gabe, for him to tell me if I should just grow it out or leave it short, if I should cut it into a really short pixie or even just shave it off again. He basically said he didn’t care, he thought it was fine, can we stop talking about it? I wanted to slug him. I could explain why, but at least half the demographic reading this understands why without me explaining. And then, I had a dream about my long hair last night. A Katy-style dream, full of realism, just a sleeping memory, really. I was brushing my hair, and I turned it over, brushed it out, and looked at how crazy it was, how it stuck two feet out from my head. Some other (faceless, nameless) people in the dream commented on it, how amazing it was, and I woke up.

There are times when I still reach back to pull my hair into a ponytail so I can put on a necklace. I still have the instinct to push my hair out of my face. I’m still surprised when Gabe can find my neck to kiss it. While I appreciate that now sometimes I get carded, and people are more apt to actually look me in the eye, I still think I look like someone else.

Gabe of all people should understand this. He sees how it is with our kids. People will literally stop their cars, roll their windows down, and remark on our kids’ hair—especially Augie. Friends have told me I can’t cut his hair because “that’s a part of his personality—that wild crazy red hair is who he is.”

Well, no…not really. He was a nut when he was bald, just like his momma. But I heard that all my life—the good and bad aspects of it. Starting when I was 11 or so I got to hear that fascinating question: “So are you a REAL redhead?” or the cruder variations of the same. Note to all redheads reading this. That question will make you lose faith in humanity and might very well be an excuse for justifiable homicide. You might think that as boys grow up (and it’s always boys who ask this), they will know better. It isn’t true. More than a few grown men have asked me that question. I came up with a response when I was 16 and I have never needed another one. Feel free to use it:

“If that was any of your business, you would already know.”

Bam—done. I got so used to all the clichés, all of the ooh, you’re a feisty redhead, look at that wild hair, you must be a firecracker in bed, you must have given your parents a run for their money, you must be stubborn, wild, hot-tempered, yadda yadda yadda.

And some of it was true, because I was stubborn and a little wild and hot-tempered. And then at some point I just decided it made sense to be those things, but even more so, because it was expected of me. I became that person with the beautiful red hair, the one who got called out without anyone bothering to learn my name. I was that girl who had men running after her on the street, saying, I’ve never seen hair like that before, are you free to get some coffee?

Dude, what, you want to buy my hair a coffee?

And now I’m someone else, and sometimes it’s refreshing, and other times it’s just hard to adjust. I’m not saying I needed that validation, that attention, or the unwanted disturbances into my life, but I did get used to it. It’s already happening with Augie. Women, and little girls, gush over his hair, and he’s all like, yeah, I know I’m cute, want to put my shoes on for me? He uses it to his advantage, where the same attention always made Lenny shy and suspicious. It’s very strange, but there it is. How can something physical become so deeply ingrained in your sense of self? Doesn’t that make you shallow, narcissistic? Well, I don’t think so. I think it just means you live in the world, where all the other people live, including the normal folks and the shitty ones. Ask all the people who never let me forget that I looked different than some other people why they thought I needed to be called out like that, and maybe you’ll find part of your answer. As I said to Gabe last night, so I’m sorry that I lost the one defining characteristic that I had due to cancer, and it still bugs me. Sue me.

Again, I know I brought this on myself. I am too stubborn and low-maintenance about hair to deal with growing it out. I like not having to spend time on hair, I remember how hot and heavy that hair was in the summer, and I don’t really feel like going back. I just wish I could look in the mirror and recognize myself. I’ll get over it—I’m just having this hair ennui, this follicular depression, you know?

It’ll pass. Probably when I give in and get another haircut.

You might think it’s bizarre that I’m referring to this hair dilemma as depression, but I really think that’s what it is. People always worry that you will be depressed when you find out you have cancer. It’s logical, and it happens to a lot of people. I think I can honestly say it never happened to me. I got angry, and sad, and the whole thing seemed unfair and chemo seemed like the biggest pile of bullshit to ever befall a person, but I wasn’t depressed. I was reading somewhere that the biggest sign of depression is being unable to make decisions. I remember going through that in my mid-twenties, though I didn’t realize what was happening at the time. It was hard for me to figure out what to do, things overwhelmed me, and every potential consequence seemed so much bigger than it really was. I was unhappy, and depressed I guess, though I don’t know why. Perhaps I was somewhat adrift, though you wouldn’t have known that if you’d seen me working full time, putting myself through graduate school, dating and socializing, buying a condo by myself, living a grown-up life. I got over it, and I made decisions, and then I felt better. Because I have no idea what to do with it, and it makes me feel sad to look at it, I’ve decided I have hair depression.

Sometimes it is by making decisions that you know who you are and you can place yourself in the world. I found out I had cancer, and I never stopped making decisions. I decided what surgery to do, which chemo to choose, to shave my head before chemo took my hair, to just walk around bald, to raise hell in front of lots of doctors, to write about controversial things in this blog, to switch jobs right after my recovery, to buy a new house when we had no prayer of selling the old one, to keep working out no matter how I felt, to be pissed off when people told me I should be grateful. I never had time to be depressed, frankly. I was too busy hating cancer and trying to reclaim my life.

So the hair thing sucks, but I know there are worse things, so don’t be clueless and tell me that. I’m the poster child of knowing that, actually. I just need to wallow in the hair self pity for a day or so. Then I’ll chop it, be ok with it for a few weeks, and hate it again. The cycle of life.

I’ve been on a roll with poems recently, and this is a blog about making decisions. So I’ll end with this, perhaps to remind myself that there are things that make me who I am that can’t be seen, things that are beneath the surface. There are lots of ways to find out who you are. Eating a nectarine is, apparently, one of them. Happy Tuesday.

I stood in a small sunny room one day in hot summer
and picked a nectarine from a bowl my mother had set on the table--
absently, as if this happened every day.
When I took a bite, I expected fruit, not revelation.
Such a nectarine had never been eaten before,
and surely would never be eaten again.
The dilemma before me was as serious as any.
What to do? Devour it in all its incredibly juicy deliciousness
or savor it, make it last as long as the afternoon sun?

Men have spent years comparing peaches to women’s breasts,
attempting to convince us of the sex in the ocean.
It would be difficult to get it more wrong.
That nectarine! That taste that made me close my eyes and sigh!
I suppose when we make love that is what we are trying for;
we are asking ourselves if it is better to take it slow or fast,
we are hoping to be the best there ever was.

I think there are two kinds of people in the world:
those who place great importance on anticipation,
and those who crave memory.
It is by knowing which type you are
that the dilemma can finally be solved:
Perhaps the taste of sweet flesh over a long,
languishing hour is your idea of perfection.

Or maybe for you, a poem is like a photograph,
a way to remember the heat in the air, the particles of dust floating by,
the smell of toast and furniture cleaner,
the juice dripping all over your face, the stickiness on your hands,
the way the little nectarine shards tried to stubbornly adhere to the pit
as your ripped them off with your teeth until nothing was left
and then—only then, did you open your eyes
and pick up the phone in the kitchen, still sticky and wet,
and when your lover answered and didn’t act surprised,
you knew what kind of person you were, both of you.
It’s sixteen years later, and you still need to tell someone just how good it was.
Posted by Katy Jacob at 9:55 AM