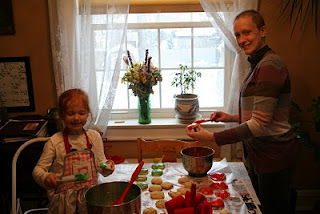 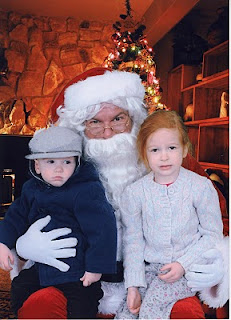 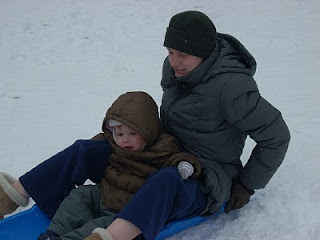 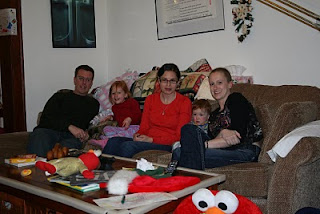 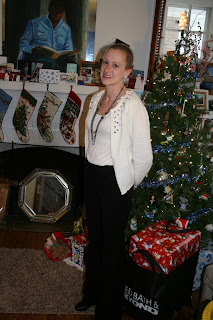 There was a time back in May when I wasn't sure I would get to see this Christmas. It's hard to think about that now, how unknown it all was. I didn't know if my cancer had spread, if I was BRCA positive, if I was going to have breasts or not at the end of the day, and I had no idea how everything would work out or if I would live. Every time there was a celebration I wondered if it was the last one.

I'm still in that place in a sense. I still wonder if it's my last Christmas, even though I know I'm not supposed to admit it. It is cliche to say that we are all in that place, but cliches are often true. Those of us with cancer are perhaps more in it, because the likelihood of dying is much more tangible than that "you could get hit by a bus" statement that everyone throws out when you say what is hard for people to hear. But in life there really are no guarantees.

But no matter--I made it here, to Lenny's 5th Christmas and Augie's second. Gabe and I have spent 8 Christmases together. We have started our own traditions, with Katy-style enormous and cakelike Christmas cookies, my green chile egg casserole and chocolate chip bread on Christmas morning, which is always at our house. I bought way too many presents, as usual. Santa Mouse still fills the stockings over here, and we leave him cheese. We will take our annual drive to see Christmas lights tonight after dinner at Grandma's house. Lenny will write the card to Santa herself. She has decided to ask Santa Mouse where he is from originally, since mice don't live in the north pole. She thinks perhaps it is Hawaii, since that's where the Magnum P.I. crew lives. (This is the same child who at age 3 came up with the idea of the initial Santa Claus. Last year I had to try to explain how she could get her picture taken with Santa. I said it wasn't really Santa, just someone you can take a picture with, and she said, so this is the initial Santa Claus? The one who comes before the real Satna Claus? Well, yes, yes it is, I told her.)

The kids have been sledding in the yard, and it's relatively warm and it's beautiful here in that snowy Chicago way. Much of 2010 seems like a nightmare, like something that didn't really happen. I remember lying in bed in late summer feeling like I wasn't even human, and it doesn't seem real that that happened to me. The really hard moments--that first phone call (I realize I have never written about what that was really like--it's like a black hole in my memory), waiting for the BRCA test, going to surgery, going to surgery again, starting chemo, shaving my head, having Gabe shave it again, realizing my period wasn't coming back, having my first hot flash--are just floating there in a cloud. I honestly think the best moment I had was the one when I decided to write this blog, because I would question whether all of these things really happened if I hadn't written about them in present tense.

The things that are hard to explain to people are those moments when my life just seemed so tangible I could almost touch it, like a twig you could snap. Does that make sense? Most of the time, you just live your life, and that is what I'm trying to do now. But sometimes, the absurdity and dreamlike nature of an ordinary life is right there in your face, and all you want to do is bat it away, but you can't because there really is nothing there. It puts you in a deeper place, which is hard, especially for someone like me who is essentially light-hearted. I don't take myself too seriously, but I haven't found the levity in cancer, I'm sorry to say. It just kind of sucks.

I'm proud of some of the things I did. When I wanted to lose my mind, I just exercised. Compulsively maybe, but there are worse things. I walked around bald even though I got a decent amount of crap for it. I did everything quickly and finished treatment in 7 months. I guess you could say I accepted what I needed to do, though everyone reading knows I didn't do it without questions or anger.

And I am very grateful for the people we had who helped us. It's a strange thing to receive help that you never wish to repay, but there it is. I'm grateful for my kids, who handled this all so well, as if this is just what life is like. Sometimes mom is bald, or sick, or she lives somewhere else. Sometimes she doesn't make dinner anymore or goes to bed before us. Sometimes she has surgery. Lenny, the child with the photographic memory, would say to me every day some variation of "only 8 more days of radiation, mom." As if I wasn't counting too. She told everyone at school when I finished chemo, and again when I finished radiation. I went to pick her up one day and one of the little five year olds congratulated me on being done with cancer treatment. Augie picked up an obsession with brushing people's hair, perhaps after I lost mine. He likes to brush it now that I have some, and it's somewhat gratifying to know that my kids will always have a memory of their mom like that, when they were still young enough to really believe I was beautiful that way, not because someone told them to say so to be nice, but because I am their mom.

The one thing Gabe and I want for Christmas is the one thing no one can promise. We want for me to be done with cancer, to somehow know the unknowable. Because we can't have what we really want, we will be cliche and want what we have. To be together. To be as healthy as we are. To watch the snow fall. To eat. To remember what it was like to be 4 and try in vain to wait up to hear hooves on the roof. To hear Augie say "Santa" and "apple" for the first time (and then after saying it 10 times correctly to just look at us slyly and say "hrrmp phrum" when we ask him to say it again). To go sledding for the first time in years and wonder how we got old enough to have trouble getting back up. To get older, a little at least. To be.

Merry Christmas, everyone.
Posted by Katy Jacob at 2:01 PM