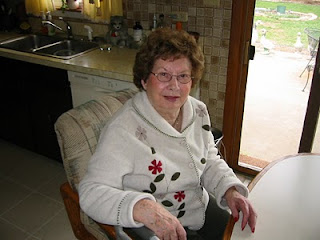 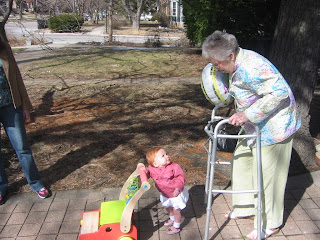 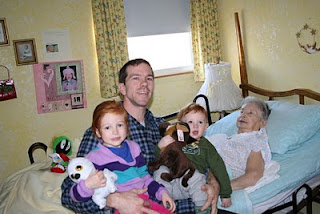 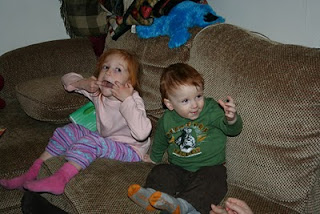 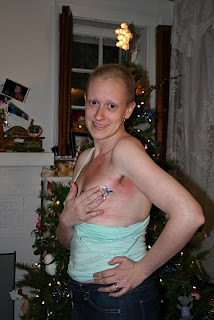 I have said before that having cancer does not give you a free pass for everything, or really for anything, else in life. Life still happens. The morning after I wrote my last blog, Gabe's grandmother, Harriette, died at age 90. She was like a mother to Gabe, and like an older Grandma for our kids. We moved to the south side in part to be closer to her and Gabe's aunt. She had Parkinsons for many, many years, and for the last two and a half of those years she was only able to leave her bed to go to the bathroom, with assistance. It is a testament to all those who took care of her that she got to die in the house she and her husband built, and that in all those years in bed she never had a single bed sore.

When I first read Gabe's online profile, before we met, I wondered why he was so elusive about where he lived. At the time he was living with Gram, helping to care for her. I found that out on our first date, and I began to understand how close Gabe was to his grandparents at that time. It was either on our second or third date when I invited Gabe into my condo. As an aside, I think that was all a ruse on his part. I had told him that I had made banana bread that day, and that it was awesome. He said it couldn't be better than his grandma's. I begged to differ, so he got to come in to my place, which was his plan all along I suppose. So all thanks to Gram, we made out for the first time standing up against the wall, while Gabe held a baggie of my banana bread in his hand.

He told me it was better than his Gram's, and of course it doesn't really matter if that was true or not. The rest, as they say, is history,

I think I met Gram shortly after we started dating, but I don't really remember exactly when--a few months later, I guess. We were going to a wedding in the south suburbs, and we stopped over there. I think the first thing she said to me after Hello was, You have such a cute figure! I didn't know what to say to that. Like any person thinking about another person's life, my memories are filled with things like that--random, seemingly insignificant things.I remember how surprised I was to see that the house was like a little shrine to Gabe, with pictures of him everywhere, especially from the time he was a baby until he was about 5; he lived with her during those years.

We have pictures of Lenny using a walking toy on her first birthday, right before she learned to walk, followed by Gram in her walker. Cycle of life, and all of that. As you can see, it's also pretty funny. She was so thrilled when Lenny was born, and for a while there she could hold her and play with her. She was never able to do that with Augie, but I am glad she got to know him over this last year and a half. I'm also glad that we went to see her the day after Thanksgiving, and I'm thankful for some of the things I learned from her:

you should assign colors to the kisses you blow to people;
you are never too old to have your hair done, or get a manicure;
you should try your hardest to always speak well of your spouse;
traditional family is kind of an unimportant concept.

It's too easy to say this is crappy timing. Any time someone you love dies is the wrong time. We miss you, Gram.

Needless to say, it's been rough around here. I have a small family, but Gabe's is even smaller, very very small in fact, and I feel a little guilty that as one of the main people left, I have cancer, and that makes things more depressing. Because it still is depressing. Cancer, that is. I've been thinking about the fact that cancer is what most people know of me right now, because of this blog. People who are interested in knowing how I'm doing rarely have to ask me, or call me, because they read about it here. This blog is not about any of the other parts of my life for the most part--I'm writing a cancer blog because I needed a way to deal with having cancer. I never felt like writing a parenting blog, or a financial blog, or a political blog, or a shoe fetish blog or anything else. That doesn't mean that all those things aren't still a big part of my life, but I wonder if when people think of me, they think of cancer girl, and if it's partly my fault because I'm putting the Big C out there in the public domain like this.

Because sometimes even though I try not to I see myself as cancer girl. I am so close to being "done" with my treatment and part of me just can't believe it. I have finished the photon part of radiation--28 treatments--and I have five electron (I might have that photon electron thing backwards) treatments left. The last five are the boost, radiation right to the tumor (in my case tumors') site. Unfortunately for me, the one part that is somewhat badly burned from the whole breast radiation is under my arm, and that area will be radiated this week because of where my tumors were located. That half of my chest is red in general, but not terrible--no open or broken skin anywhere, and it only itches above my breast. The breast itself feels fine and doesn't look too bad. Under my arm is bright red, and it hurts a decent amount, since you rub your arm against your body every time you walk or do just about anything. The skin feels tight and it hurts to sleep on my left side. The scar also throbs, as my nerves are repairing themselves from surgery, and I haven't been able to wear a bra in a while so the lack of support hurts too.

But honestly I would keep going with radiation if I could trade it for menopause. On Friday I'll be done, but it sure won't feel like it. These hot flashes don't seem to be letting up as they were supposed to do after chemo, so I'm afraid I might be stuck in menopause forever as a 35 year old. I have been feeling vaguely nauseous, and I've had headaches, so I'm stopping the Icool as of today. I didn't even take it for a month, so it didn't have time to work that well. That leaves me with nothing to help me sleep, and boy am I desperate for a decent night's sleep. Last night I slept somewhat normally, in spite of at least half a dozen hot flashes, and that seemed like a victory, in a shitty cancer type of way.

Every time I have a hot flash, I am reminded of what chemo did to me, and my treatment doesn't feel "done" at all. Everything about menopause just really, really sucks. I feel so damn old. I look in the mirror and for maybe the first time in my life, I really hate what I see. I have always felt pretty good about myself, perhaps out of laziness. That beautiful hair always made me a somewhat attractive person even if I didn't half try. Now I just look like an old man, and I feel like an old woman. I never thought I'd say it, but I preferred being bald. Then I was at least striking, if off-putting, in my appearance.

I used to see a young, vital, healthy, attractive person in the mirror. Now I really feel like my old-Katy self esteem has been stripped, and I'm left with this ugly duckling shell, burning up 15 years too early, wondering where her old voracious sex drive has gone, looking at the dark lines on my nails that mark each one of my Taxol chemos like the rings of a tree. And all I can think is, Ugh. I thought about putting some makeup on or at least drawing on some eyebrows (I've gotten good at that! people seem to think they're real) before taking this picture of my post-photon chest, but then I thought what the hell. Tell it like it is, right?

I went shopping the other day, and I realized that I am suddenly buying more expensive clothes. I was always an excellent bargain shopper, but now I feel like I need to try a little harder, to do more with whatever the hell I've got left. So I go for the designer winter coat because they actually make them in size 4, and I buy some size 26 Silver jeans, which would have put me over the moon a year ago, and I look at myself in the mirror and I still think, holy shit, I look like a boy.

Don't think I'm feeling sorry for myself, I just have this little space on the internet to keep it real, and that's how I'm feeling now. Maybe it's because this has been a depressing week, but really I think it's because cancer takes a lot of things away from you, and it takes a long time to process the leftovers, or to stop feeling like what you are is a bunch of leftovers that just aren't as good as they used to be.

Even some innocuous things are tough right now. The nausea and headaches I've had recently have made me worried about brain tumors, just as the back pain has me worried about bone cancer. I would like to agree with everyone who says this is mindless paranoia. Unfortunately, the spine and brain are two of the most likely places for breast cancer, especially an aggressive type like mine, to metastasize. So while other folks can have regular aches and pains, I feel like it's a part of my new normal, my new responsibility as a parent who would like to live awhile, to take these things seriously. After all, if I would have ignored that hard line in my breast or listened to everyone else who told me it was nothing, I would have died. Not figuratively, but actually. It's hard for me to say that, to believe it, but it's true.

Wow, I just re-read this and I won't be getting any PollyAnna awards any time soon! I can at least say that I've been going out more recently, and I've been more than able to talk about regular things. That's not to say that I lie about how I'm feeling, but rather that it's possible to just feel a lot of things at once. When talking about kids or marriage or jewelry or manicures I can be like my old self, but when people ask me how I'm feeling I usually say something like, I'm tired, but I feel ok. When someone comments on my hair I say that I hate it. I disparage hot flashes, and all of that. I don't lie about it, but I don't feel like I focus on it when I'm out in the world, either. I focus on it here, on this little 14 inch screen where I can write about this craziness so I know it's not just a dream, that this little man-boy, or whatever I am, is really me, somewhere in there, somewhere beneath the burns and the baldness and the exhaustion and anger, is that young and vital woman. I haven't lied, but you can lie to me. Lie to me! Tell me it's true.
Posted by Katy Jacob at 5:35 PM