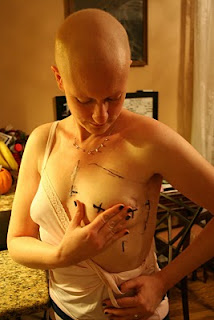 Obviously I didn't write about the mapping experience yesterday. It's for a good reason--there's not that much to say. It was totally painless. I didn't need the radioactive injection and the CT scan didn't involve any sort of red-hot burning dye like the one I had to do in the ER last month. I don't get my tattoos until next week, apparently. So what happened? Well, I met with the young radiation oncologist, who is a very nice doctor. He doesn't talk much but answers my questions and seems to care. He comes across as strangely shy but knows how to laugh. He is also somehow one of the leading radiology oncologists in the country in his specialty (which is a type of radiation that doesn't apply to me, but that's another story).

I even asked him why I need to do radiation since my tumors are gone and I've done chemo. He said that without radiation there is a 30% chance of recurrence in the same breast; with it, it's still 10%. I really don't like to hear that, so I tell myself that those percentages are based on all breast cancers, of all stages, so I shouldn't worry about the 10%. What the hell else am I going to do? Any place I turn, there's some number telling me things might not turn out well. I just have to say that especially now that I completed 8 rounds of chemo, once radiation is done I will have done everything I could to survive this beast. There's nothing else in the arsenal for us triple negatives, after all.

Once he answered all my questions he asked me to lie back so he could draw on my chest. And then--that's what he did. He drew some lines with a black sharpie and told me to get dressed. I went in for the CT scan to get mapped, and there was even more sharpie, augmented with ...tape. To me, this is one of the most humorous aspects of breast cancer. It is just like the sentinel node mapping. You have this ridiculously sophisticated and expensive technology--CT scans, radioactive mapping, etc., but what it comes down to is a sharpie, some tape, and, what are those things called...protractors? The technician used one of those to measure me. Seriously. It was cold and metal and she was drawing on me like we used to do in math class in the early 90s. This picture is the result. Now perhaps no one really wants to see this, but I find it kind of fascinating, and it's my blog, so I guess I can include this weirdness and just assume people will ignore it if it's too disturbing.

Once the protractor was put away, that was it. Now they get their physics people to look at my map, they call me back in early next week, and I get my tattoos placed if everything lines up correctly. In the meantime, I need to make sure the marker doesn't wash off, and in fact I am supposed to keep this sharpie map until radiation is over, even though I will have the tattoos. This makes it kind of difficult to wear anything at all low-cut, so all of my vneck sweaters are going to be on hiatus. I guess it's good I'm not doing this in the summer--at least in winter I can wear turtlenecks. Of course, right now, it's beautiful and it's the sunniest fall we've had since the year I was born, so I'm not ready for all winter wear just yet. Oh well.

The doctor told me I could start radiation as early as next week if I was feeling up to it. He understands that I want to be done before Christmas. It's hard to imagine starting that routine so soon, and yet the thought of having this all over with is really the only thought that's keeping me going right now. I know I might get extremely tired on radiation, and that is the tiredness that is cumulative and lasts beyond the treatment itself. My chemo tiredness has always faded once the poison finds its way out of my body. I know I might have a severe skin reaction, though I'm told that being fair is no indicator of that. I know that radiation won't be any walk in the park.

But it can't be like chemo, right? Chemo and its crazy side effects. I had my tomato face and shortness of breath yesterday, so I went for the zyrtec. That helped, but I still gained 4.5 pounds of water weight, which I subsequently lost today by alternately being sick and peeing a thousand times. However, my bone pain has been very mild. Today should have been my worst day--but I didn't take the neulasta, so I actually felt pretty good. I guess if I hadn't needed neulasta, I would have tolerated taxol a lot better, regardless of the allergic reaction. But no matter--it's over now.

I keep saying that to myself--chemo is over! No more chemo! I feel that I need to keep telling myself that or it won't really be true. Because if it's true, that means that somewhere down the line there's an end to this treatment, and then what? What happens next? Maybe I need to get out a sharpie and a protractor and make up my own map, draw some lines to somewhere really good, far away from cancer land, somewhere that will take me at least thirty years to get to, maybe even fifty, where there are grandkids and old age and things like that. But first, I guess I need to let these doctors follow this map on my chest.
Posted by Katy Jacob at 8:24 PM