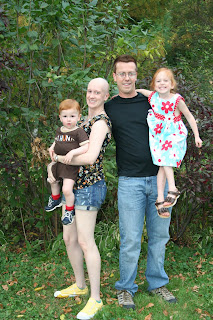 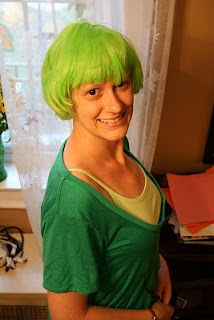 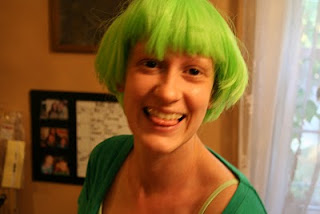 It's interesting how a person can be simultaneously thrilled by something and terrified of it at the same time. I absolutely can't wait for my last chemo. I would do it today if I could. On the other hand, I'm so afraid they will send me away due to bad #s, and I will be crushed. I worry that I will have a more severe allergic reaction or my heart will not react well again, or that other side effects that I have somehow avoided, like neuropathy or dead fingernails, will happen with the last one. I worry about not doing neulasta and that I will get an infection when I have no white blood cells left for a few weeks. And yet, I am ecstatic that I don't have to do that shot again.

It's funny how you can get used to things. My eyebrows are largely gone, as are my eyelashes, but since they're not entirely gone and they're so fair anyway, it doesn't look that weird to me. Maybe I'm just telling myself that. I've also gotten used to being tired, to the point where it doesn't affect me that much. However, sometimes I can't tell if I'm tired due to chemo fatigue or due to the fact that I never sleep because of these damn hot flashes. Seriously, I have two an hour all night long. I often don't fall asleep until 3 am. I end up missing breakfast with the kids almost every day since Gabe lets me sleep and I'm too exhausted to know what time it is. Acupuncture has not been helping with this, much to my dismay. I did it yesterday and it seemed to help for about 12 hours, but that doesn't really cut it. Oh well--I'm going to keep it up anyway. Maybe it's helped with my immune system, which I will need since I won't take the neulasta this time.

The woman who has been doing acupuncture for me is a breast cancer survivor herself. She does the free acupuncture for the hospital that I will be going to for radiation as well. Ironically, she was doing that before she was diagnosed 10 years ago. So she knows all about breast cancer both from her own perspective and from seeing so many other women who have gone through it. Though she didn't have to do chemo, it is so refreshing to not have to explain everything about what I'm going through. When she asked me what type of chemo I'm doing and I said taxol, she said, well that explains the hot flashes. And she offered to do special acupuncture on my spine for bone pain without my asking.

She also referred me to an organization called ROW, Recovery on the Water. I am very intrigued by this. It's basically a bunch of breast cancer survivors who row on the Chicago river. That sounds like my kind of support group--the kind where you exercise and don't have to talk about cancer--if I can find the time to do it once this treatment is over. I mentioned to the acupuncturist that I wondered if it was true that things got worse emotionally once treatment is over--something I've heard many times. She said she sees that happen, but she doesn't think it will happen to me. Why not? Well, you seem to be a realist. You don't strike me as someone who has been in denial. The women who tell everyone they're fine, who are all smiles, they're the ones I worry about later.

That gave me some food for thought. Could it be that hating chemo is good? That crying and being terrified and hating cancer from day one might have helped me? I have no idea. I do know that it would be hard for me to imagine a time that would be harder emotionally than the entire span of May 4-June 25. Sometimes I can't even believe I had that conversation on the phone with the radiologist who told me I had cancer. And everything that happened after that--finding out I was triple negative, that I had three tumors, waiting for the BRCA test, during which time I had no idea if I was going to have to lose both breasts and my ovaries, going through surgery and not knowing until then if my nodes were involved or what stage I was, finding out I would have to do surgery again, not knowing until two days after that if my margins were clear, and therefore not knowing if I would need a mastectomy still, having my chemo put off, not knowing what chemo to choose or what to expect--my god, it was a total nightmare. How did I go to work and get in front of a crowd to speak at my conference? I remember talking to people and thinking, the next time I see you I will be bald. And that terrified me too.

So I can imagine that I will feel somewhat adrift in January, when as a triple negative survivor they tell me, ok you're done, go home and resume your life. This will be somewhat difficult after spending 8 months in treatment for cancer. I will be terrified of every mammogram, especially those first few, since I will be so close to being out of treatment that I will want to just lay down and die if I have to do it again so soon. But will it be harder than what I already did? I just don't see it. It's not like I will suddenly realize that cancer could kill me or that this is really happening. It's not like I will suddenly cry for the first time or stop being brave. I've been crying and scared the whole time.

I'm starting to really appreciate some of the other things that happened to me that helped mentally prepare me for dealing with cancer. The epilepsy, the car accident. Because I know what it's like to have something in the back of your mind all the time that is not in the back of most people's minds. A few months before I was diagnosed I wrote a short essay for the website of CURE, Citizens United for Research in Epilepsy, because I know the founder and I had offered to do something writing-related for them. They have a lot of really heart-wrenching stories on the site, and I worried that mine would seem pretty lame by comparison. Most are not written by people with epilepsy, but rather by their families. In some cases that is because the person in question died, or is too incapacitated by epilepsy to write for themselves. The stories that are written by those personally dealing with epilepsy involve current struggles.

I haven't had a seizure in 20 years and I stopped taking medication when I was 17, so I wrote about my childhood with epilepsy, but also about how it is always there with me. You are never "cured" from epilepsy. It can always come back; when I got pregnant, I was anxious for months each time that the hormonal changes would give me seizures. I worry about my kids having seizures, but also about my ability to take care of them if I have epilepsy again, and that some of these cancer drugs might trigger seizures. I'm the crazy mother who snaps my fingers in front of my daughter's face when she doesn't respond to me, and I yell at her, not because I'm mad, but because I think she's having a seizure instead of just ignoring me. I'm the one who sees my son being aggressive or not forming words and where some people would worry about autism, I worry about that out loud but secretly wonder if he's having seizures at night, which is a big cause of speech and developmental delays.

If you're interested in the story, check out http://www.cureepilepsy.org/home.asp and look for "Katy's Story" on the lefthand column. You should also read the other stories; this is a great organization. Anyway, the grand irony is that at the end of the story I wrote about how I felt like I'd dodged a lot of bullets in my life and I worried that the next one would get me. And then I was diagnosed with an aggressive form of breast cancer for which there is no treatment except chemo. Is this my bullet? I don't know, but I think I do know how to weave it into whatever is left of my life, because to a smaller extent I've had to do that before.

Or at least I hope so--I want to come back, be me again. For a while that will be a mangy-haired, tired, menopausal, radiation-burned, haunted version of myself, but it's what I'm looking forward to as my new years resolution. In the meantime, I can always be someone else. Lenny had asked me to get a green wig to be a witch for Halloween, and I couldn't find one anywhere. I have a long purple one and a witch's hat. But then I came across this "English mod wig" and thought, you know what, that looks dope. I wore it to pick her up from school yesterday and she loved it. The other kids didn't even notice, so I wonder how I can think they would notice me bald. And the teachers loved it too. Do I look mod? Do the mod Brits have electric green hair? Who knows, but when I put that wig on I'm doing it for fun, not to pretend I don't have cancer and that I'm normal. I think the normal came out of the equation a long time ago, perhaps I've never really been normal, so maybe that shouldn't be the goal after all.
Posted by Katy Jacob at 10:50 AM