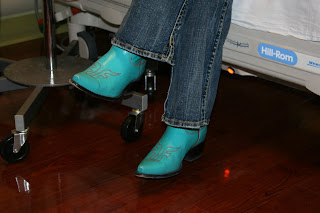 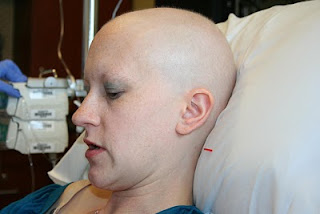 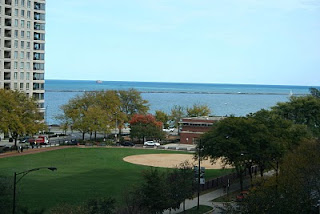 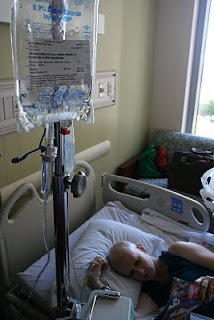 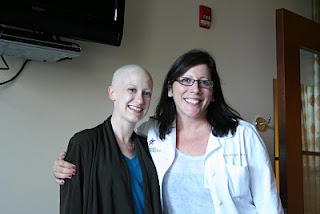 There was a time, including last night, when I really thought this day would never come. I have had terrible insomnia due to my hot flashes, but I was so tired last night that I did fall asleep for about 4 hours, and I had these crazy chemo dreams. I showed up six hours late and missed my chance to have chemo. My numbers were horrible and they told me I needed to wait a month. Gabe forgot to drive me and I couldn't get to the hospital. It was like the dreams where you show up naked to give a speech or where you forget to go to your final exam, except much more morbid and with more serious consequences.

Gabe and I went out to Union Pier, MI, on Saturday for our 6 year anniversary and my mom watched the kids overnight. It was a great trip, albeit short, and it did manage to distract me somewhat from chemo thoughts. Not entirely though--it's not as if the hot flashes decided to take a vacation, and of course the owner of the Inn had a story about his wife with metastatic breast cancer (she survived) so it all really does kind of follow you. But I think if I had stayed home all weekend I would have been obsessed with today, and that would not have been a fun way to spend a beautiful few days of my favorite month.

Today I was so nervous on the way to Northwestern that I couldn't talk in the car. I had to see the doctor after my bloodwork was drawn since it was the last chemo and I worried that I would wait forever and not get a room to myself. This actually almost happened. I saw him about a half an hour after my scheduled appointment, a record of timeliness, and I thought about telling him how I felt and just said screw it, asked my questions, got some flip answers and walked out the door. The nurse who always takes me back to the chemo suite pulled us aside as soon as we got to the waiting area and said, I'm so glad you're here! I wanted you to get the room before the next lady but I didn't see you out here.

So we just barely got our room with the lake view (though they built the rooms wrong--you can't see the lake when you're lying in the hospital bed, though your guests can see it). I wore my party shoes--the turquoise and red cowboy boots I bought years ago in Austin, TX. And lo and behold my numbers were excellent--better than the last time. My veins seemed tired and took lots of coaxing but once the nurse (here's a picture of us when I was all done) put the IV in she did it effortlessly and it hardly even hurt. So victory number one: eight rounds of chemo plus one hospital stay that required a 36-hour IV and included one blown vein in my hand--and I never needed a port. At the ER last month, they were shocked that I had no port. But that makes it easier, they said. Yeah, for you. I don't want that crap in my body. Someone gets paid to figure out how to do blood draws and IVs, and I shouldn't need two extra surgeries to spare them the trouble.

I did have allergic reaction #3 this time during the infusion but it was milder. I felt myself getting hot, though in a different way than the hot flashes. Gabe noticed my red face, and so did the nurse, but she just watched me. I said I'd rather avoid more steroids if it didn't seem too bad. She never stopped the taxol and I didn't get more steroids. Victory #2, I guess. We'll see what happens with the flushing, shortness of breath and rash over the next few days--at least now I know to take the zyrtec.

I have been saddened to have some major tingling in the fingers of my right hand this evening. I really thought I would avoid neuropathy since I haven't had any up until this point. I'm hoping it's transient, since it's in the hand where the IV was placed. I'm also hoping my new peach fuzz doesn't fall out. If you click on the close-up picture of me at chemo, you can see my new virgin hair (plus an acupuncture needle in my neck). In a few pictures Gabe and I took over the weekend in Michigan, the hair even looks red, though to me it looks colorless up close--just like Augie's hair as a newborn.

It's an immense understatement to say that I'm ready to put chemo behind me. I can't really believe I don't have to do it again. I had BETTER not have to do it again--having a recurrence or God forbid a "mets" is just too horrifying to imagine. I don't have another mammogram until the end of February, so I have at least that long to know that I'm chemo-free. I see the oncologist and surgeon again on January 4th, for more breast exams and to talk about how I'm healing and any lingering side effects (you're fine! you look great!). I'm relatively impressed with my breast's healing, actually. I have that half-moon scar and the indentation, but considering the size of my breasts and the fact that I had two surgeries, it looks pretty damn good. Now, radiation will make it look like hell for a while, but after that it will be perkier than the other one. The skin will never be the same, but it could have been much worse.

Ah, radiation. I am getting mapped tomorrow. I'm not looking forward to it. I will get another one of those painful radioactive injections that's not supposed to hurt for long--unless you're thin--and I will get a cast made of my breast. I don't need underarm radiation since my lymph nodes weren't involved. But I will get a few tattoos--probably several since I had several tumors. I find this fairly ironic. I am 35 years old. I don't have any tattoos; I don't even have pierced ears. Stupid cancer makes me get tattoos and they won't even be interesting--just black dots on my chest. If I was a normal, more Irish redhead I would have freckles and moles all over my chest and it wouldn't look as obvious, but I'm not and I don't. But more on that tomorrow--I will write about the mapping experience since I feel like it's my duty to explain things to others, since so little has been explained to me. I just wanted to write this last chemo blog tonight.

If I write it, it might be true, right? Can I get a witness? No more chemo! Say it with me! I'm done, so it's all over but the shouting as they say, or but the waiting, to see how this has changed me in the end. Is the menopause permanent? What will my hair look like? Will Gabe change his mind, which right now is set on me staying bald or with extremely short hair because he loves it (this from a guy with a redhead fetish? weird)? Will my heart be ok? Will I have neuropathy? Will my cancer come back or metastisize--will this have done any damn good?

That's the stuff that will never really leave my mind about this experience. I know it could have been worse. There are many things that didn't happen: no port, chemo brain, blood transfusion, extreme weight fluctuation, fatigue that made it impossible for me to function on at least a low level, no major illness or temperature landing me in the hospital (I'm knocking on wood since my WBCs are set to tank in a week due to the lack of neulasta). But so many things did happen, and I can't really say anything positive about chemo. It was really, really, shitty.

Now, I am so grateful for the help we have been receiving in the form of people cooking for us, doing yard work for us, and being our back-ups when crazy things happened and we needed help with the kids. I'm humbled by the people who are reading this blog, some of whom don't even know me that well. But what all that means is that I know cool people, not that breast cancer or chemo is positive. That's where I guess I'm different than the October-awareness bandwagon. You recognize positive things when something bad happens and people pull together, but the thing is, those people were already there. I still wish the bad things hadn't happened--the big one (cancer) and it's attending poison. I would rather see people at a party than have people help take care of me because I can't take care of myself. And of course, some people have pulled away from us, and I understand that too. It's some heavy shit--cancer's not good.

But as the chemo nurse said today, you did it--you made it. I know radiation won't be fun, but I figure it can't be as bad as chemo. It's every day and that in and of itself is a pain in the ass, but it should be easier. I need to see how the next few weeks go and I need to not get sick, but I did it, didn't I? I'm here, in one piece, though a strange piece it is. Fuzzy-headed and with half my eyebrows and lashes, scarred and dented, alternately burning hot and freezing, sometimes bloated, with fewer appetites of all kinds than before, muscle-atrophied and tired. But I can think and remember and write and walk and eat and enjoy my family and friends, and I didn't hide in the house like I thought I would. That bald lady, or that lady with the green wig or the do-rag in the hot sun, she was out there. Maybe less than before, maybe slower or by herself more often, but there. I'm very aware that there are a lot of people in my situation who can't say that. I might be one of them someday. But not yet--not yet, not yet.
Posted by Katy Jacob at 7:54 PM