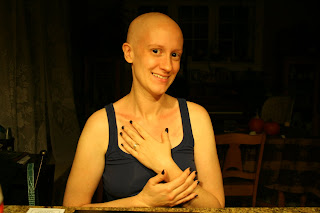 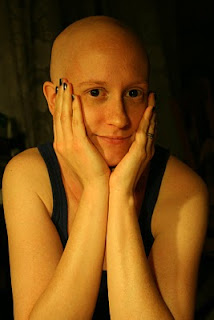 As most people know, I successfully got through my second taxol infusion this week. I wasn't expecting it--on Monday I told Gabe to go to work, since there was no reason for him to waste more time off just for me to be sent home after getting another neupogen shot. That's not what happened, though. Apparently the excruciating bone pain I felt last Friday was the neupogen kicking my WBCs into overdrive. On Monday, I had a count of 25,000 WBCs, with a neutrofill count of almost 9,000; it had been 200 on Friday. So, needless to say they infused me. I alternated between being thrilled the treatment had only been put off 5 days and dreading doing another round of chemo--my body was started to be happy with me for not doing it again, for tricking it into thinking we were done.

Once I accepted that I needed to do chemo and took off my cowboy boots and gave the nurse my arm, things didn't go so easily. I had two IV attempts again. The first one was relatively painless at least--it just didn't work. I had no allergic reaction with the first taxol, but this time--of course the one time that no one was there with me--I got sick in the middle of the infusion (unheard of! they told me) and while in the bathroom, got very hot and noticed that I was essentially turning purple. I ran into the infusion room and called the nurse. She thought I would be ok after the first time so she wasn't watching me closely this time to see if I reacted. She saw me, said, well, you look a little pink, yanked the taxol, pumped more steroids into me, made me wait half an hour (during which time I got my free acupuncture, while lying on my side with an iv in my arm) and then started the taxol up again. Gabe arrived after all of this drama, and the whole thing turned into about a 6.5 hour affair. I'm scared I will have a worse reaction for the last two tries, as my body builds up immunity to the solution. This taxol is definitely no walk in the park. At least this time it didn't hurt quite as much going in.

I got the neulasta shot the next day, and on Monday night and Tuesday I actually felt pretty good, in spite of new insomnia. I didn't get one minute of sleep on Monday, probably due to the steroids, but also because I am having horrific hot flashes now that menopause is in full effect. This is not once or twice a night. It's like every half an hour sometimes at night, making sleep impossible. My body did not have 20 years to slowly lose its estrogen. I had a period on September 1. Now, I am in full blown menopause--just like that. It really, really makes me sad. And it's hard to deal with the day to day effects. Hell, if I hadn't been in the bathroom getting sick during chemo, I might have thought my toxic reaction to taxol was just an extreme hot flash, and I might not have gotten the steroid in time. I have no idea what would have happened then.

Tuesday night I went to water aerobics for the first time since right before my surgery. It's always been me and the old ladies, with a few younger women thrown in. They have treated me like a granddaughter, seen me through two pregnancies, always ask about my kids. This time, no one wanted to look at me, or talk to me. They recognized me--I could tell by the shocked looks. Finally at the end of class, one of the women I've known through the years, who is maybe 10 years older than me and has 3 boys, came up to me and said, "you have such a beautifully shaped head. I applaud it." When I said thanks, she said "I didn't wear a wig either. They were too hot and it wasn't worth it. Regardless, you look great. You have a great head." Breast cancer, I asked? Nope. Non-hodgkins lymphoma. Then she gave me a referral to a woman at a local health food store who had some good creams for radiation.

Who knew? This cancer shit is everywhere. I really appreciated her saying something--it's the worst to know everyone notices you and people are too spooked to say anything. But of all the times to wear a wig, it really doesn't make sense at the pool! That was the one benefit--no more worrying about water in my hair, no need to wash the chlorine out at home. Just towel dry that head and go. Anyway, now that I've had cancer I know how I will react if I see a suddenly bald woman. Just acknowledge it and keep doing your jumping jacks. Life goes on.

It's nothing short of amazing that I did water aerobics that night--I did it last night too. On Wednesday, I felt like death warmed over. My body hurt so badly I can't describe it. I was so nauseous and weak, with a terrible headache, that I felt as bad as I did on my worst a/c days. I hardly ate anything and couldn't have dinner with the family. I know now that the neulasta itself has an extreme affect on me, as I didn't feel nauseous AT ALL on the first taxol when I didn't get the shot. I have asked permission to not take neulasta after my last chemo, but to let my WBCs go up on their own before radiation. That could push off my radiation schedule, but at this point it's not worth the extra suffering. One of my issues on Wednesday could be that I gained 3.5 pounds in one day after the infusion--must have been water retention since I hardly ate anything. I then lost 5 pounds in a day. Severe dehydration, perhaps? Yikes.

Taxol does enough on its own; neulasta just makes the symptoms worse. I feel very stiff and weak--not fatigue-weakness, but muscle-weakness. And I'm pretty strong for my size, and I was pretty active even on a/c--I walked and went to the gym. I'm still walking, and I can do water aerobics, but my muscles feel so weak I don't know if I can lift even the 8 pound weights. Between this and the menopause, it's hard not to just feel old.

I now resent all the jokes people make about middle aged women with hot flashes. It is no joke, let me tell you. You literally feel like you're on fire and it's hard to breathe. For me, it's even weirder because while I can sweat some now, I am still not sweating like a normal person, so I don't cool down. And then my bald head feels really cold. This had better be temporary. Why the hell do we spend so much time complaining about our periods? The alternative is a lot more annoying, I'll tell you. My sex drive is so drastically different now, and everything just feels different. It's sad, that's it--just sad.

Temporary, I hope, just like this hair loss and muscle weakness, right? I don't have neuropathy yet, though last night I was pretty tingly in the hands and feet. My nails are still there; I painted them black to help keep them. I like how it looks actually. Gabe painted my toes, and I kind of like that unexpected sight on my feet too. My eyelashes are trying to leave, though most of my eyebrows are still there. They seem to be in some sort of limbo.

As am I. I just feel that way all around--like I'm in limbo. Waiting to see if I can do the next chemos, waiting to see what they do to me if so, waiting to find out if these side effects are permanent, waiting to see when I'll be able to work a normal schedule, and mostly waiting to see if it made any damn difference. At the end of 2010, most likely, I will be done with cancer treatment. But will I be done with cancer? Could this highly recurrent triple negative bullshit come back to haunt me in the next three years? I just don't know if I could do all this again. And I'm not even finished! I haven't even started radiation. So I guess I shouldn't go there.

October 18--that's my new goal date. Two days after our anniversary. I'm still getting mapped for radiation on the 19th and I want to start radiation on November 1. It's up in the air though. If I don't get the neulasta, my WBCs will be at risk--in the middle of flu season. I am already exiling myself from Lenny's school because we found out that someone there had chicken pox. My kids haven't been vaccinated yet, and can't get vaccinated while I'm on chemo. They can't get live flu shots either, and I can't be around people who have had live vaccines. So while I feel better today and want to go out in the world a bit, it's scary. My body might be less fine that it appears to be--it's strange because while I feel very old, outside of my baldness, I don't seem to LOOK that old, do I? At least that's what I'm telling myself! Don't contradict me, please. Us menopausal women can get testy.
Posted by Katy Jacob at 10:15 AM