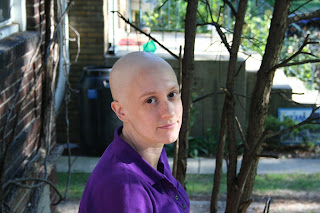 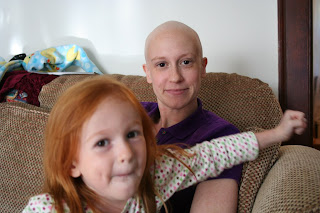 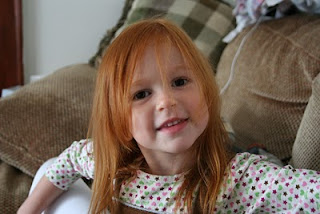 Another week, another group of days where I didn't want to sit down and write. A lot has been going on, some related to cancer, some not, and there's too much to get into here. I do have to give us a shoutout for going to see Disney Princesses on Ice this morning rather than watching the first Bears game of the season. (Unfortunately, we arrived at my mom's with enough time to see most of the second half of the game, including that horrific attempt to score from what, the six inch line? Four times? With nothing to show for it?) Lenny was just mesmerized by the entire event. We were smart enough not to bring Augie along. I don't think the United Center could withstand him. And I was dreading the idea of princesses mixed with ice skating and Disney merchandising, but every time I saw how entranced Lenny was I wanted to cry. She just loved it.

I'll tell you though, this crying thing is getting old. I want to blame changing hormones, but I really think it's just cancer. There's always mortality right in front of my face, regardless of how ridiculous the scenario is. Why do all the princesses DIE (sleep, get their fins ripped into legs, whatever) before they get to be happy? Why does every single one of them have waist-length hair (except Snow White I guess)? Why are these princes such morons? You know, the usual deep questions.

Breast cancer is always in my face too. On the cover of the Sunday parade, for instance. In Glamour magazine. Don't I just read that for fluff? I got pissed off at this article that was outlining myths about breast cancer. One is apparently that young women are getting diagnosed more often. Not true! It's been the same for 25 years! OK, is Chicago an outlier or something? Because to me it seems like this shit is everywhere. I was annoyed to find out that I am not only in the 5% of breast cancer diagnoses that are for women under 40--it's actually down to 2% for women 34 and younger. So whenever someone tells me the odds are in my favor and I don't act too happy, it's because of odds like that and the triple negative thing. Also, there's some nonsense in Glamour about how many women with early stage disease don't have to do chemo. Bullshit. Especially for young women--they seem to always want young folks to do it. Then the woman who runs the Komen foundation went on to say that chemo isn't as bad as it used to be. Something about how while some women lose their hair and some women feel some fatigue, life goes on as usual.

Some? Hey if there are women out there who have done chemo for breast cancer with no hair loss and fatigue, let me know, so I can buy some of what they've got. I've never heard of that.

I spent the week increasingly paranoid about this bone cancer issue, and I completely lost my mind on my medical team when I learned that my oncologist was canceling my appointment to see him right before my next chemo round Wednesday. I saw him to get my poison prescription back on Gabe's birthday on June 14, and since then I have seen him a total of one time. That time, I waited two hours and saw him for two minutes. I like the physician's assistant and all, but please. I am going through cancer and chemo and I'd like to see an actual physician to talk about it.

When I brought this up, I was told I would get to see him on November 24, and that did it. I should be done with chemo in mid-October. How does that help me? Several angry emails and phone calls later, including some calls to various people asking for a new doctor recommendation, and I got an appointment for Tuesday. I guess the squeaky wheel does get the grease. Now, who knows what this will mean. Will he be able to tell if my spine has a tumor? Will he be able to reassure me as no one else has been able to do that I don't have bone cancer? Will I be more pissed off than ever after waiting hours for this appointment and then getting five minutes of his time and no answers? Time will tell, I guess.

I am definitely not looking forward to the next taxol infusion. It really did hurt like the devil going in, and I worry about what that means when they reuse the same vein over and over. I've been losing more non-scalp hair, and I'm somewhat desperate to keep at least my eyebrows. You know how it hurts when one eyelash gets in your eye? This is like that, all the time. I'm even losing arm hair, which is no big loss since no one could ever tell I had any to begin with, but still. So far I have no neuropathy and my fingernails are in tact, and the bone pain, while bad for several days, was nonetheless not debilitating. The things I feared the most after the first taxol haven't happened yet, and I just want to keep it that way.

Otherwise, I had my first hospital scare this week. I've had horrible allergies and I thought that's what was going on this Friday. Both kids were at daycare (Lenny asked to go, since she's started doing kindergarten work at montesorri and LOVES it) and it was my day off, so I had all these delusions of grandeur. I went through a ton of clothes, getting rid of everything size six and above, and I went for a walk. I had all these other errands planned. And then I just felt horrible. My whole body ached, and I wondered how all but the spine pain go away for days and then return with such a vengeance. Damn taxol. Then I took my temperature. 99.5. Hmm. For someone with a normal temperature of 97 or lower, that was bad--not really, but it is for someone on chemo.

I called the breast clinic and they told me that if I got to 101, I would need to go to the ER. If I got to 100.5, and it didn't go down right away with motrin or tylenol, same deal. After much misery, I was scared to see 100.4 on our cheap thermometer. I guzzled some tylenol. No hospital for me, damnit. No putting off this chemo round just for some stupid cold. It went down, thank God. I normally don't complain about getting colds, but this time I was pathetic. It was such a gorgeous day, and there I was, useless, AGAIN. I'm sick and tired of being sick and tired, as they say. I would like to fool myself into thinking otherwise, you know? So that's what I have been doing to some extent--fooling myself. I went to book club last night even though I didn't feel good and I ate... a hamburger! From the grill! With charred carcinogens and everything! And I made brownies with homemade frosting and ate some! And I talked to people, successfully I hope, and then I...collapsed.

So here's to hoping I'm 100% better and I get to do chemo on Wednesday. Since I am more than halfway done, I thought it would seem like the home stretch. But it seems a thousand years until October 13 right now, and I'm losing my interest in writing about this stuff to some extent. To make it more interesting, I thought I might distract myself by posting some more musings on being bald. Here goes:

1. This whole country is obsessed with hair. Half of women's magazines are devoted to it. Since I'm bald, none of my time is devoted to hair. That might make me feel better if I had ever dedicated time to hair before, but still.

2. The advantages to being bald while female often relate back to other people's discomfort with it. For example, no one--no one!--will try to sit next to me on the train. I don't even have to put my bag down next to me. Someone will start to sit, look at me, grab their stuff and move on. People also don't talk to me in the elevator. But most salespeople are especially nice to me.

3. There are some definite social constructs around being a bald woman. For example, while I wouldn't say I've seen a lot, I have seen several bald black women walking around downtown Chicago. I'm not talking short hair, or a very short fade--I mean bald. And interestingly, I have never thought "cancer" in these cases. No one else seems to take much notice either. But the only white or Asian or Latina women I've seen without hair are within the confines of Prentice Hospital, in the cancer ward. I think that's part of what makes me so noticeable. What's up with that? I don't get it. The other day I was walking to the train and a very striking young bald black woman stopped me and said, you look so pretty! Well thanks, so do you, I said. I wondered if she thought I had cancer, or was just working it on purpose, as I think she was doing.

4. As the weather cools, my head freezes in the outdoors. I think the only way bald men can stand it is because they have more body heat in the first place or something. I get cold!

5. I officially can't stand wearing wigs. I wore one today to the Disney thing, and felt like such a fake the whole time. But again, in the winter, I might not have much choice.

6. I see how pretty hair can be a crutch. I try a little harder to look decent now. I didn't always have to do that before. If my hair was looking good, and it often was, I figured that was good enough. Well, now I have to do SOMETHING to not look like a guy. Note the pictures here. I am not trying too hard and I think I look pretty masculine, unlike my daughter who looks like such a GIRL even while making funny faces. Oh well.

7. Hats don't fit on this tiny bald head. They just fly right off in the wind.

8. There's really nothing interesting left to say about being bald, including the last seven things I've said.

There might not be anything interesting left to say about cancer either, but I imagine that's wishful thinking. Wish me and my spine good luck!
Posted by Katy Jacob at 4:03 PM