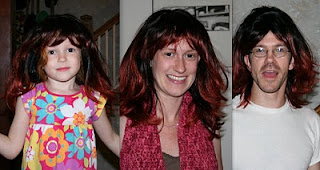 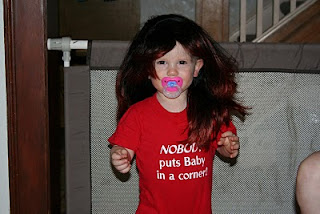 Today I started my new chemo, taxol--the supposedly easier one. I got through it, which means I've got five down and three to go. I wish I was done with it, but at least I've done more than I have left, right? I've been very nervous about it and I haven't really slept in the last three nights. It's hard when all of the variables are unknown. At least with A/C I knew how my body would react to some extent. A large number of people, something like 15%, are allergic to the solution they mix with taxol. I'm allergic to so many medications that I assumed I would be one of them and I was, and still am, concerned about all the different side effect possibilities.

We made a 9 am appointment for this chemo, as opposed to our usual 1 pm that allows us to go into our offices to work on chemo mornings. Taxol is a LONG infusion--about 4 hours total compared to 1.5 for A/C. We got there about 10 minutes early and were there until 2:30. They have to give it to you very slowly or your body can't tolerate it I guess, especially in the dose-dense fashion that I'm doing. Anyway, it was much less crowded in the morning and we had a nice room, so we could watch a movie (The Warriors! Remember that from the 70s? Thanks girl--you know who you are. And yes, I can dig it). We had to wait a while to get my blood test results back and I had a strange emotion when I received them. Last time, I had several numbers that were bolded on my sheet--meaning abnormal. But they were only slightly low--say, if the normal range was 12-16, I had 11.8. Nothing to be too concerned about so they went ahead and gave me the chemo anyway. But today, my numbers were all excellent--perfect, in fact.

I saw that and I had this strange sense of pride. I thought, see, I can have all these horrible side effects, and my body is still mostly healthy. I might look like an old man, and my body might be tricked into thinking it's an old woman, but so far I've gotten through some of the worst crap you can do to yourself on purpose, and I haven't had to change my life too drastically. Why am I proud of that? It's mostly luck, or maybe my age or general good health, that's got me through. But I think when so much control is taken away you feel like taking credit for something. And it helps with the despondency I've felt over going into menopause (I keep getting thrown for loops there--I've been spotting for the last few days. Am I getting my period? Probably not--just my body's way of being peri-menopausal, or of torturing me with the reminder--sigh).

Which is not to say that if I do end up with bad numbers at some point, that I should feel ashamed or wonder if I could have done something different. It's kind of like childbirth that way. Most people get through it fine, but that is actually an amazing thing--that a healthy mom and baby usually result from pregnancy and delivery, though of course not always. We often take the "normal" outcome for granted, and we really should marvel at it. Because there are some people who never get that normal outcome, and that haunts them. After all, I did 4 rounds of very drastic chemo, and I am not neutropenic or anemic. I don't have leukemia and my heart still seems to be working ok. I haven't needed a blood transfusion. My chemo has stayed on schedule up until this point. That's all good, right? I have decided to self diagnose again and assume that acupuncture is really helping me, along with my decision to eat my one meal of red meat--a cheeseburger--the day before chemo each time. Something must be working, and why not that? It's as good a solution as any the medical folks seem to have.

After prepping me with a hot pack for a long time to bring out my veins which are getting weaker, the nurse got my IV in with one try and started the new pre-chemo cocktail of decadron, benadryl, and pepcid, of all things. These drugs are meant to ward off the allergic reaction. Within a few minutes I felt so sleepy and out of it; the amount of benadryl they give you is enough to knock out several people at once. I stayed awake though, because a woman came in to give me a free mini-massage for my shoulders and feet. That was great.

Then it was time for taxol. Gabe was so nervous he couldn't stop talking and I had to whack him with a magazine. Again, this is the only moment where I feel like any courage is involved. Giving them your arm for that poison, watching them put it in. The nurse started it extremely slowly and watched me closely. Was I feeling hot? Did I have pain in my chest? Trouble breathing? A rash? etc. Nope--apparently I'm not allergic to the solution. So that went as well as we could have hoped. I will say that this taxol doesn't let you forget that it is poison. It really hurt my arm--I could feel this deep pain, stinging and burning, all the way along the vein for most of the time. They gave me another hot pack and more saline solution in my IV, which helped a little but also made me need to go to the bathroom a thousand times, but the pain still made it impossible to get comfortable and sleep even though I was wiped out from the benadryl.

So now I wait. If I get the extreme bone pain that many people get, it will probably happen over the weekend. I'm scared of that. Some people have mild versions, but you hear these horror stories about young women who end up in wheelchairs from the debilitating nature of the pain and the neuropathy. Neuropathy is likely to be more cumulative, so I'll be waiting a while. And we'll see how long these eyebrows, eyelashes, and nails hang on. Fun stuff.

In the meantime, for right now, what they told me has proven to be true. It's not nearly as bad as a/c, not yet anyway. A/C made me feel awful right away and that awful feeling lasted to some extent for a whole week each time. With this, I have taken no anti-nausea medications at all and I was able to eat a normal dinner. I feel tired and dizzy, and I took a nap when we got home, but I don't feel like a complete non-human. And Gabe doesn't have to give me the neulasta tomorrow. Taxol can do a number on your bone marrow too, but not as much as a/c. Hopefully I will avoid the extreme side effects and my numbers will stay positive and I'll be done with this shit in October and able to start radiation in November. Then I can have my first follow-up mammogram in February and be scared to death of that, but in the meantime I could enjoy Christmas. I'm almost scared to write that, after my past experiences when I let myself think positively and then got punched in the gut. I just feel like I've been through enough, can't this one go a little easier?

Unrelated to taxol, I went with a coworker to the American cancer society the other day. I haven't had time to search out the resources of ACS, Gilda's club or anything else. It boggles my mind how anyone with cancer finds time to go to a support group or seek out services. Between my kids and my job and the numerous treatments and doctor's appointments, the only thing I feel like I have time for is acupuncture. When exactly am I going to go visit ACS? So I'm glad my coworker, who went through a very similar thing with triple negative cancer, lumpectomy, AC and taxol, and radiation, three years ago--suggested it and set it up for me. I got all this loot there--some pillowcases made by cancer survivors that I picked up for my kids, pink scarves knitted by breast cancer survivors for me and for Lenny, some coloring books for Lenny, and this awesome wig.

None of the wigs in the free wig bank looked remotely good on me. I am just SO not a blonde. The dark wigs didn't work either. I told the woman at ACS that I didn't really want a wig, that I had them and I didn't wear them anyway. She asked if I would be willing to try on some funky wigs that no one else wanted, so they didn't even put them out. That was fun; we were all three laughing at my little fashion show. The woman at ACS seemed genuinely pleased that I was willing to have a little fun with this--they must not see many smiles in there. Anyway, these wigs were pretty atrocious, at least on me. With some of them I wondered who thought it would be a good idea to make such a wig, but who am I too judge? I'm the one who decided it was a good idea to walk around with a shiny white head, after all. But the one you see above was the clear winner. Would I wear this to work or the grocery store? Well no, but I wouldn't wear my natural-looking wigs either. So for fun, maybe if I'm up for going out anywhere interesting, or for Halloween, this is it.

It's so good that the whole family had to try it on. Augie is the clear winner with this look. You should have seen the waves cascading down his back as he ran around with his pacifier in his mouth. I thought I would cry from laughing. He actually kept it on and seemed to like it. I wonder about this child. He is a crazy, aggressive little brute. But he seems obsessed with shoes, loves to wear my hats, and apparently can look like a pint-sized rock star with a woman's wig. I'm glad it's not so cut and dried with these kids, because sometimes I wonder how Lenny is such a girl and Augie is such a boy when they live with parents who often take on the opposite gender role. As a parent, you realize that you can only take credit for so much and kids just are who they are, so you need to enjoy it even when they make you nuts. Who is this eating, squealing, mischief-making, hitting machine who has no fear and likes to shake his little booty in a black and maroon wig? That's my son, and you wouldn't put that baby in a corner now, would you?
Posted by Katy Jacob at 6:48 PM