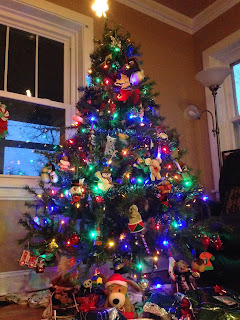 The world is too much with me. I haven't been able to justify saying anything here about anything. I also know that it is not a concern of anyone but me if I write here or not. I know that is probably the wrong attitude. Luckily, there is now definitive and fairly exhaustive proof that my attitude won't kill me or heal me one way or another, just like I never thought it would. Everything I can think of to write is a diatribe, and it doesn't seem like the world needs any more of those.

So maybe I should just write stories, so my kids can read them someday.

I thought this time I would write a Christmas Tree Story.

When I was 18 years old, we had the last Christmas in the house I grew up in. My parents had been separated for years but were not yet officially divorced; that happened several months later, and was quite a relief. I was a freshman in college and my brother was a senior in college, and it was the last time we would call Chicago "home" at the same time, given that we both lived in Minnesota, and once my brother moved out of Chicago, he never moved back. I am here and I am not, half the time wondering how the hell I can stay, the other half wondering how the hell I can leave, all the time frustrated by my allegiance to the idea of a place that doesn't show any allegiance to anyone.

My little family went to get a Christmas tree a week or so before Christmas. I cannot tell you where we went. Every year of my life for almost two decades we picked out a tree from the same place and I don't know where it was or why we went there. It was always cold when we picked out the tree. We were partial to the eccentric trees, not too round, something with a little personality. We found one with little to no infighting for a change and they wrapped it for us in that plastic that I'm sure is never used anymore and had no real purpose even then.

On the drive home, we heard a strange sound on the top of our car. Something was squeaking; the tree must have been rubbing against something on the car. We pulled over, but still couldn't figure it out. Once we got home, we carried the tree to the porch so it could "set." What did that mean? Did trees need time to get used to the idea of being inside houses? I can't remember.

Once we deemed the tree worthy of coming inside, my mother made the discovery.

The sound we had heard on the car was a bird trapped by the plastic, dying a slow death inside our Christmas tree.

My brother took most of it out with a gloved hand. He vacuumed out what was left. That was the last time my family had a live Christmas tree.

A few months later, my mother moved to a small apartment. She bought a small fake tree to go with it. Though she lived in that apartment for a decade, she gave me that tree three years later when I moved into my first apartment by myself--no roommates, no boyfriend, just me. I took a second job as the manager of the building so I could afford it; I made about $20k a year working an a nonprofit at the time. Even then, that was a low salary. I remember those years in my own apartment, and later my own condo, which I bought when I was 25, with a fondness bordering on reverence. It is the dream of a loner to live alone. I could not give that up, not until I met my husband, and even then, I was wary. After seven months of dating he told me he thought it would make sense for us to live together--wouldn't that be fun? I wasn't buying it. I told him I didn't need his help with the mortgage, all the furniture was mine, the place wasn't that big--I didn't want to give up my independence just to live with someone. It would only make sense if I was going to do something permanent like get married. He said right! That's what I mean. Maybe we should get married.

And because society has conventions, I didn't know how to live alone and do that, so he moved in just before Christmas and we shared the holiday together under that tree as the beginning of the new family we didn't yet know we would have.

In that apartment I loved, in that condo, in our first house that we bought just weeks before we married, which we finally sold just weeks ago after 11 years, in this house with its sprawling common spaces and windows in illogical places, I have kept that little tree. There are ornaments from my childhood, some of which I made. Our kids' crafts are represented. There are ornaments decades old, nothing matches, the blue and silver garland is falling apart and isn't big enough even for this tree, and the lights are a different color than the star. My husband's Christmases are a mix of his mother refusing to celebrate and threatening to end her life each year and his grandparents in the Chicago suburbs welcoming him from California and insisting that the tree remain standing until his grandfather's birthday on January 10. Gabe's grandfather died a year or so before we met and he has been saddened by the fact that I never knew him from the very beginning. We have no ornaments from Gabe's childhood, but we put the tree up the day after Thanksgiving and leave it up until January 10 to this day, even though I can't stand it, because not being able to stand something isn't relevant in the scheme of things.

I started hosting Christmas at my place when I was 23 and unmarried without children and I still do. We throw way too many presents around that tiny tree. We leave cookies under that tree, and carrots for the reindeer, and cheese for Santa Mouse. We always get a thank you and a homily of sorts in return. I keep a bread machine in my basement just so I can make chocolate bread once a year for Christmas morning. I live in a neighborhood where some families have to rent out banquet halls just to fit the immediate siblings and cousins. A large Christmas at our house has nine people. I've hosted Christmas once when I was bald and two weeks out of cancer treatment--that was the year that Gabe's grandmother died just weeks shy of the holiday; two years ago I hosted while I was in the middle of chemo and 6 days out of having an emergency D&C due to extreme bleeding brought on by the poison. We've had pregnant Christmases and Christmases with babies. I've exchanged presents under that tree with boyfriends until I didn't have those anymore. We have maybe just this last Christmas left with our daughter playing along and fully "believing" in Santa, though she told us years ago that she didn't believe in Santa when she was 5, as she just figured it was someone in the family who hid presents after everyone went to sleep, until she realized that was crazy, because who wants to stay up past midnight? And she continues to talk to me about the sound of hoofs on the roof and how hard it is to stay awake even though you try with everything you have.

This is just a story of how we found our Christmas tree. I know we could start over again every year with a fresh one, or at least get one that is bigger or more impressive. But it's been 22 years and I think we are stuck. It fits, don't you think? Some people have Christmas trees. We have dead birds and actual spilled guts and families broken apart and terrible illness and new lives emerging and falling in love and being alone and being together and generally a mismash of everything.