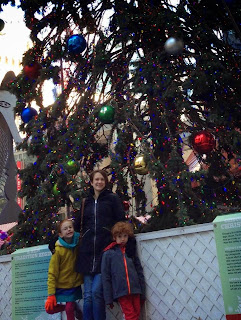 When I was a kid, we watched Christmas Eve on Sesame Street every year. I had a brainstorm the other day to order it from Amazon so my kids could watch it too. The show first aired in 1978, when I was three years old. The plot goes something like this: Oscar makes Big Bird paranoid that Santa is too fat to possibly fit into the skinny chimneys. Meanwhile, Cookie Monster is trying to write a letter to Santa about wanting cookies, but he ends up eating the pencil, the old-school typewriter, and even the phone. Down the street, Bert and Ernie get Mr. Hooper entangled in one of the most endearing Gift of the Magi stories ever told. And in the background, all the time, there's that perfect 1978 Sesame Street backdrop of the most diverse cast ever brought into a show. The kids that were brought in as extras, all of whom must be older than I am now, are still adorable and endearing. The story is a great one. But it's the version of Sesame Street itself that I love.

I think of my old neighborhood like that. People playing street games. Newspaper stands. Kids wandering around by themselves. Other people's parents looking after me. Working moms and single parents and apartments. Taking the subway. Metal trash cans in the alley. And when Maria just GIVES IT to Oscar for starting all the trouble, and it's like her superpower is making people feel bad about themselves because they deserve it? Yeah--that.

You've got this cast of crazy characters. A guy who is, according to my daughter, "just plain mean." An oversized bird who talks to an imaginary friend who isn't imaginary at all but is rather, well, what the hell is Snuffy? Grover interviewing the kids about their responses to how Santa gets down the chimney ("nope, he goes through the window") and everyone takes it absolutely seriously. Bob who sings cheesy songs after telling Linda she should read a magazine or something since she's deaf (WTF?). People with very ambiguous relationships. Gordon carrying little Patti around, because her mom was all, oh, yeah, she can come to your place if Big Bird doesn't come home.

I know we were characters in our old neighborhood. So were so many other people. Sometimes I wonder if there are neighborhoods like that anywhere in the world anymore, with that level of economic and racial diversity and poverty right next to the working class and solidly middle class and renters and homeowners interspersed. And then sometimes I wonder if it was like that at all, or if I just remember it that way, but no, I think it was really like that. Sometimes I have no idea how to do things in my life the way my life is now. Gabe doesn't either. And I know that we are characters in our new neighborhood, but sometimes it still doesn't seem to fit. He will always be the guy who will eat your kid's leftovers because you never know when you will eat again and I will always be the girl who is looking over her shoulder while driving the getaway car, waiting to be pulled over. 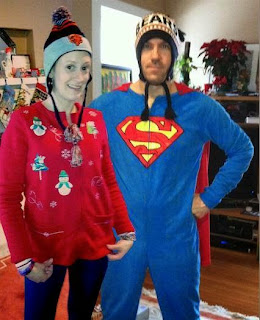 OK, that last one is a lie. I do know how to help them believe in magic. I know that years ago, when she was only 5, my daughter walked up to Gabe and told him that she had thought for a while there that Santa was really just us, putting presents under the tree after we went to sleep. Then, she realized it couldn't be true, because who wants to wake up at midnight? So, Santa must be real.

That's the story she was telling her little brother last night, as we drove home from my mom's Christmas eve dinner. Augie, how realistic is that? Why would you want to get up if you were already asleep? Why would you wrap presents for yourself, knowing what they are already? It doesn't make sense. Of course Santa is real. 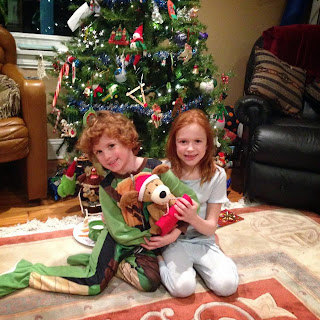 Big Bird learns that. Santa comes while he's asleep, and much to my kids' chagrin, we never get to see how he did get down the chimney.

It is magic. It was magic when I was 16 and it was just my mom and me at home and I was an insomniac and I still could not stay awake on Christmas Eve--because let's be honest, I didn't want to stay awake. It's magic that I never, not once in my entire childhood, tried to find the presents, and it's magic that neither of my kids has ever done that either. It's magic the lengths we go to, all the places there are to hide, the way we who are so loud can learn to whisper, it's magic that little brothers don't always believe their big sisters when they tell them a seemingly impossible story.

My son has his own ideas about how Santa does what he does, and that's what I want to leave you with this Christmas. But first, let's remember what those Muppets had to teach us. Let's remember that it's worth it to sacrifice your most prized possession to give your best friend an empty box. Remember that Mr. Hooper, who doesn't celebrate Christmas, didn't want anyone to have to be sad in order to make someone else happy. Remember that your friends and family don't have to be perfect, or cheerful, or able-bodied, or young, or important and visible to other people, to be your friends and family. Remember that beautiful things happen whether or not you witness them. Remember that someone might be looking for you when you disappear.

Remember how magic works. Augie told Lenny that it's not just that Santa is magic. That's not enough--that wouldn't get the job done. So how does he do it? Remember this: 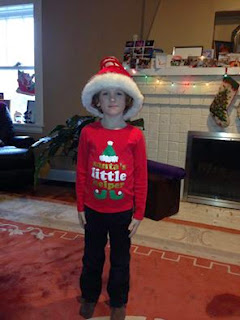