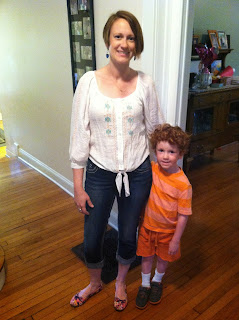 Today you are five years old, and I am writing you a letter. Someday you will come to realize that most of that time that I spent tucked away in the house somewhere writing, I was writing a long, long letter to you and your sister. I wasn't writing it for the normal reasons that sent other mothers to the far reaches of the Interwebs to divulge the secrets of their souls. I was writing it so that you would know me, in case you would never have the chance to know me, because I died before you were old enough to remember me. I was writing it so that I could keep telling you stories, even after I was gone.

That sounds like a cryptic beginning to a letter to a boy who has not yet started kindergarten. And yet, that doesn't concern me, because the hard truths of life have never been far away from you, and you have never been unwilling to admit to them.

Long before I had cancer, when you had just been born, your father and I knew you were an old soul. When you were just a month old, he turned to me and said, Kate. I think he's been here before. And there we were, a couple with no spiritual life to speak of, only half-jokingly discussing who you were before your reincarnation. After all, what three week old baby laughs, a full belly laugh, practically slapping his knees, while he dreams? Laughter is tied to memory, and that is the reason that most very small babies cannot laugh--what do they have to remember? What could be so funny, in less than 30 days? Our guesses as to who you were in the past have evolved with your antics, but we know for sure that whatever life you lived, you had a damn good time.

When you were not even one, I had to stop nursing you. You know that by now, if you are reading this; it is a theme of this long letter. You might also know, but you might not, that when I was first diagnosed with cancer, I never once cried around your sister. She was four, and felt everything and understood everything so keenly. I am admitting to you now that I cried around you. I took you for walks in your stroller, and I cried. I talked to you, the way I always talked to both of you when I walked you in your strollers, about whatever was on my mind, as if you were just tiny versions of adults, which, of course, you were. But I also cried, and you would just look at me, and while I told myself that you were a baby and you would never remember your mother crying in that desperate and ineffectual way that she cried in short bursts that came out of nowhere, I knew even then that you would remember. You probably don't know that I chose my surgery path in part because of you. How could I justify a longer recovery period that would stop me from being able to hold my infant son if it wasn't medically necessary? I held you within two days of having my lumpectomy. I couldn't move my left arm, but that was no matter. I have a video of your sister taking her first steps, and I don't have any memory whatsoever of you learning to walk, as fogged as my mind was by grief and chemo and fatigue. Your second year of life was a hard one, but we got through it. 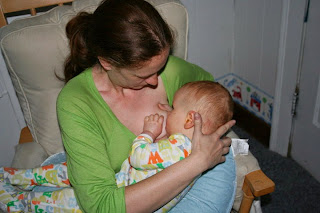 (the last time you ever nursed, on Mother's Day, 5 days after my first cancer diagnosis)

And then--well, and then. We had to go through it again, but this time, it was you who was four, who felt everything and understood everything so keenly. It was you who had night terrors, who began nonchalantly talking about death, and God, and what came before us, what is left when we die, it was you who asked to kiss my missing breast to make it feel better after this round of surgery. I thought I had spared one of my children the memory of this mess, but I was wrong about that too.

Having a mother like me has had its benefits, I suppose. I taught you how to throw a perfect spiral. You appreciate bald women and think they are beautiful and normal, and you probably always will. Having me as your mother means you haven't had to be afraid to talk about things that mothers and children dance around, like illness, aging, death, the world's unfairness, and fear. I am the mother who ignores advice about how to raise a son, how not to crush your spirit and ruin you by assuming you could sit still and behave, because I know something that I do believe you know but not everyone knows. Yes, you are a boy. Yes, you are willful and defiant and easily distracted and you hate sitting still and you are aggressive and loud and funny and you get a lot of attention and you love to shake your little booty and you are always one step away from trouble.

The thing is, Augie, I knew a kid like that.

And no, it wasn't your dad. Haven't I asked you a million times why I am always the one to finish eating first? Because I don't like to sit still either. I've just had to learn how to both be myself and follow some rules, like sitting my behind down at the dinner table. It's hard, but it can be done.

You and I are so much alike that I know damn well that I need to tell you that you don't get to act however you feel like acting, however nature tells you to behave. I didn't get by with it, and neither will you, and not getting by with it didn't ruin me or break my spirit, and neither of those things will happen to you, and hell yes you can sit down and read. I knew you could, but you just didn't feel like it. That's all right. For my entire life, my mother, your beloved MeeMaw, called me...Little Shit. So I get it. 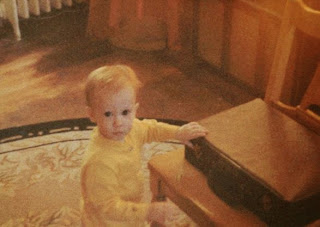 (there I am, breaking into my father's briefcase)

And why wouldn't we be alike, you and I? Now is the time, in this fifth birthday letter, for me to tell you something I have never told anyone. You know by now that I saw you, I bore witness to you, when you were just an egg. I saw the egg that became you on an ultrasound machine during a doctor's visit to discuss my secondary infertility, which we now know was probably caused at least in part by breast cancer. I got pregnant with you that night.

And there it is, that out in the open secret:

It is almost definite that the entire time I was pregnant with you, and the entire time I was nursing you, I had cancer. After my diagnosis, after that awful weaning, your father and I painfully laughed about how you always preferred the left side. You literally fed on my cancer, and you thrived.

I brought you to life in the midst of my death.

It's dramatic, but it's true. And it is something you have always known; in fact, you have spent much of your life believing that I had cancer not in spite of giving birth to you, but because of it. So, while my body was turning on itself, it nourished you and enabled you to become a real person in the world. You have always--ALWAYS--been a person that understood that life and death are opposite sides of the same coin, because that was the environment in which you were born.

So, I get you, with your exuberance for the little things, your sheer force of will, your impatience and your rhythm and your lack of self consciousness and the deep thoughts you have and your interest in the whole world including the things you know are too old for you like sex and whiskey. You try me, because seeing you is like seeing myself, though you are a tad wilder and a much better liar. And I remember what was going through my mind, and the things I plotted, and I know we have our work cut out for us. The chickens have truly come home to roost.

But there are things that I think about that I very rarely say, and I am relieved that I don't need to say them, because someone else who has not yet learned what he is supposed to say says them for me.

Like this: the day of Lenny's 8th birthday party, which might have been the last one when the older kids still tolerated your presence, when you thrilled at the prospect of spending the afternoon with those kids, yelling and showing off and having the time of your life and then collapsing exhausted into bed and exclaiming this was the best day ever. And then your father, telling you to wish upon a star. And you, getting quiet, pensive, almost shy. You, claiming you could not tell him what you wished for, and him saying that was up to you, though if you wanted to tell him, you could, because you could tell him anything. And in the midst of your best joy, you were thinking this:

You were saying to us, this love is painful with its goodness, these moments are more perfect for having been lost, right from the beginning.

And you were right. And me too. I think things like that too. Augie--I wish, I really, really wish. But know this: me first. 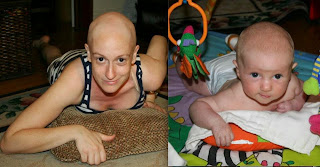