Mother's Day is a little bit...awkward around here. It always falls just a few days after the anniversary of my first cancer diagnosis. On the day itself, thousands of people march past my house for a community breast cancer walk, making it impossible to forget about cancer and the potential death it represents on a day that is supposed to be about motherhood and the joy it represents. Even that event is complicated, as it is not simply painful or a stark reminder of the radiation I did at the hospital that benefits from the walk, the acupuncture I did to make it through chemo on two different occasions. It also allows a chance for me to see how many people truly love and support me; this year, about 50 people have joined my KatyDidCancer team for the walk. Mother's Day is also a reminder of what cancer has taken from us, as I am forced to confront the memory of how I wanted to have a third child, a possibility that my aggressive cancer took from us.

On Mother's Day I think about strange things, like being 35 years old and telling my husband I didn't want him to have a vasectomy because if I died I wanted him to be able to have kids with someone else. I remember his anger when I said this, and I remember not having the heart to tell him that I secretly wanted my kids to have some kind of mother figure in their lives, so my statement was not just maudlin, not simply practical, but actually kind of...hopeful, in the weird way that hope presents itself in our obviously mortal lives.

So, this holiday leaves me feeling ambivalent. I have been a mother for nine Mother's Days, but five of those have been marred by these wayward thoughts.

Wayward seems to be the way of things around here, though, and there are worse things, I suppose. Sometimes the eccentric nature of this little family unit provides some truly insightful moments.

Like the other day, when my son, who will be five in a few weeks and has lived almost his entire life with a mother with cancer, was talking about a baby who needs to have heart surgery. I asked if he was worried about the surgery, and he said no, but he thought it was weird that the baby needed surgery. And then this conversation happened:

K: OK. Do you think I had cancer because I had you?
A: (shrugs)
K: (lying, because for all we know, pregnancy is exactly the reason I had TNBC, but how in the world could he know that?): My cancer had nothing to do with you. Nothing. People have babies every day and don't get cancer. And besides, men get cancer. Kids get cancer. Look at me. My cancer has nothing to do with you.
A: (humoring me) OK mom.
K: Go to bed. Give me a kiss.

And then, he did the thing that only Augie does, that someday too soon he will be too embarrassed to do. He grabbed my face with both of his hands and swooped in for his kiss, and then gave me a crushing hug. And then we just looked at each other for a minute, forgiving each other for how hard we've made it for the other by feeling everything so completely, nodding at each other, acknowledging the life and death that tie us together and make us ask imploring questions in the dark. 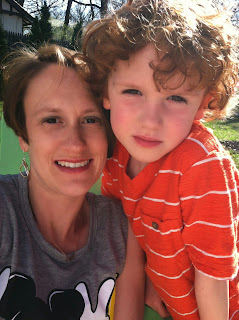